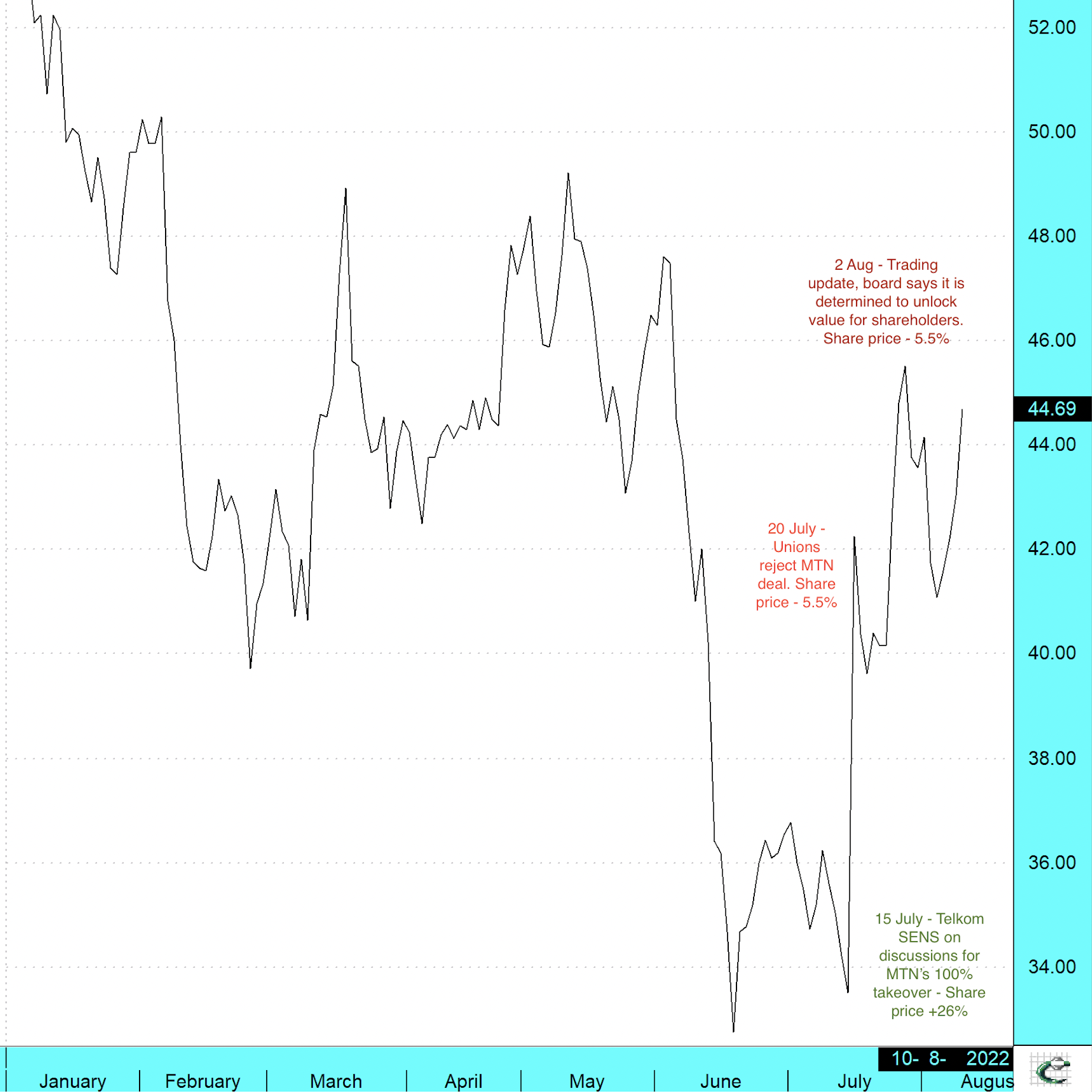 Rain is a niche player chaired by Harris and run by Brandon Leigh, a co-founder who took over from former Outsurance boss Willem Roos in March 2021. Once dominant Telkom has slipped into an also-ran position behind South Africa’s effective duopoly of Vodacom and MTN. Its most successful stretch was under the direction of Sizwe Nxasana who went on to spend nine years with Harris at FirstRand, the last five after succeeding him as CEO.

Earlier this month Telkom confirmed it is ‘in play’ in a trading statement which referred to its ‘value unlock strategy, which was adopted following the realisation that Telkom’s market capitalisation is not representative of its intrinsic value.” The shares currently trade at two thirds of its stated net asset value of R66 a share.

After dropping to R32.75, on July 15, the company’s share price jumped 26% after Telkom announced MTN had approached the company with a proposal to acquire 100% of the business for a combination of shares and cash.

Were the merger with rain to be consummated, the most obvious challenge would be a clash of cultures.

While Rain is perceived to be nimble, sassy and cutting edge, Telkom’s legacy is very different. This is not a concern for Harris who told me this morning: “We had the same circumstances when RMB merged with FNB. We would hope we can contribute to creating a culture in the merged company that empowers management more.

“Large companies often don’t harness the latent talent of people in the company. Telkom and Rain have good people that can flourish with an empowered culture.”

What about the very real issue that 80% of mergers fail – a point which former investment banker Harris is acutely aware of? His response: “We’re very aware of the merger stats and will not go into it without being comfortable with the risks.”

This morning Harris answered a series of my questions via WhatsApp – his responses are in italics:

It’s exciting to hear of a challenge to the duopoly but how can one quantify that – ie I was under the impression that rain leverages the Vodacom and MTN infrastructure; would there not be a risk of losing this if Rain were a direct and serious competitor?

“All telcos that have infrastructure have realised that in order to sweat the assets they must share or sell and lease back (eg towers). Competition is not only needed in retail but also in infrastructure. Providers including Vodacom and MTN want to sell access to their infrastructure to other roleplayers – sharing is good for the market and international good practice. Re our existing deals – they are long term.”

Telkom’s market cap is R23bn. With rain’s R1bn ebitda it is likely to be valued at not much more than half that figure. So would this not be more of a takeover by Telkom than a merger? Or have I got the numbers wrong?

“We will not address relative values until we prove the business case. Bear in mind that rain has just achieved critical mass so future growth will be at better margins. We are at different points of the value curve – 5G will accelerate growth and at rain we are positioned for it.”

Are you able to quantify rain’s drive into 5G compared with what Telkom, Vodacom and MTN have – ie is 5G the real value add for Telkom in this proposed merger?

“Rain was been at the forefront of 5G since 2016. The 5G ecosystem is about hit is growth straps. Two years ago very few devices supported 5G – now almost all devices support 5G. Rain has been by the far market leader in 5G to the home. This is just the first business case. Even the US telcos like T-mobile are also flying in the 5G home market. See pic from Sept 2016 to show we not fly-by-nights.”

Quantify how this merger would be pro-consumer?

“There will be more competition at both infrastructure and retail markets, so consumers will be beneficiaries. Triopoly – not the current duopoly.”

If the Telkom board rejects the merger proposal, what would the next step for Rain be? Would you consider going hostile?

This question was not responded to.

How would BCX fit into the enlarged group – would it become non-core?

“They have huge access to corporate and public sector entities … which will be main beneficiaries of 5G as the ecosystem matures.”

Why not just bid for Openserve which will be separated anyway on September 1? Surely this is the most obvious fit with Rain?

“No, we believe that there are huge synergies in all the divisions of Telkom especially at the radio network layer.”

Last question – any other similarities with the RMB/FNB transaction? Apart from being a different sector and the culture issues mentioned above, anything else that is similar for you?

“Very similar dynamics I think, an established large super tanker and a speed boat getting together. Lots of lessons. Biggest is don’t underrate the super tanker. Tortoise and the hare, but a combination can be powerful.”