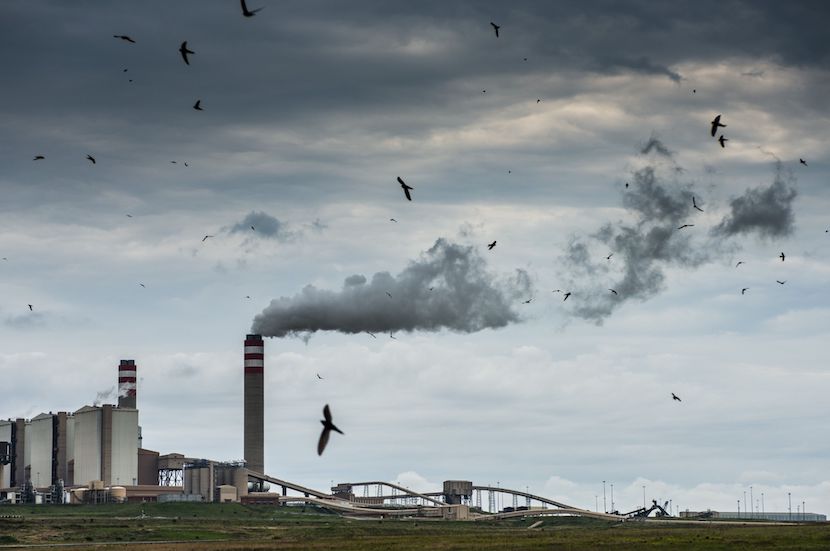 Bianca Goodson, the courageous Eskom whistleblower who lifted the lid on its corrupt dealings with Trillian, has broken her silence about being left in the lurch after her sensational evidence in September 2016. In a searing letter to Eskom CEO André de Ruyter, Goodson bares her pain and anguish at the treatment from the agencies that had benefited from her brave decision to expose Trillian Management Consulting for its corrupt relationship with Eskom executives. Unemployed and alone, the former Trillian CEO also speaks for the other whistleblowers who deserve recognition, not ostracisation, for lancing the boil of corruption. – Derek Alberts

Former Trillian Management Consulting CEO Bianca Goodson has written an explosive letter to Eskom CEO André de Ruyter about life after speaking up about corruption. Goodson is one of the foremost whistle-blowers around corruption at Eskom and is credited with exposing irregularities related to the power utility’s R1.6 billion contract with McKinsey & Co.

Trillian Management Consulting is owned by Salim Essa, a close associate of the notorious Gupta family who is linked to widespread corruption. The company has been accused of being a front company for McKinsey & Co to secure contracts worth billions from Eskom and Transnet.

Goodson is to thank for a lot of information around this. She resigned from Trillian in April 2016 after noticing questionable activities at the company and feeling lied to by her superiors. She said the firm was using its connections to land lucrative government contracts, such as from national energy company Eskom, then handing them to external partners.

Goodson decided to speak up by releasing a statement on Trillian’s activities and testifying in parliament in November 2017.

Since becoming a whistle-blower life has been tough for Goodson, which she described in an open letter to De Ruyter.

“I believe the numerous public discussions and debates regarding whistle-blowers in South Africa is nothing short of a utopian and academic discussion,” she said.

She said while her actions were the right thing to do, it has severe consequences on her personal and professional life.

“I remained unemployed, traumatized by my loss (divorce and my career) and am on the road to recovery from PTSD,” she said.

“Financially, I had to release my pension to support my daughter as I had no other source of income over these years.”

The full letter to Eskom CEO André de Ruyter is below.

Although we have not met in person, we share a common vision; we endeavor for Eskom to become a national asset; and that the looting of Eskom is identified and corrected. To date both of our efforts have attracted significant media attention.

I write this letter to you to highlight the efforts that I have made towards our shared vision. Through this I implore you to make a difference and publicly support the whistleblowers like myself, who have helped Eskom.

Within the circle of my friends and family, I am referred to as the “McKinsey Slayer”. I obtained this nickname because of:

The evidence that I provided to the Public Protector in September 2016;

The evidence that I provided to Geoff Budlender SC in his investigation into Trillian in the 2017, whilst McKinsey claimed to not have any relationships with Trillian and maintained a position that their dealings at Eskom in respect of the Top Engineers Program was above board;

My actions in September 2017 when I publicly blew the whistle on Trillian’s operations as I was the CEO of Trillian Management Consulting for three months in 2016;

My appearance at the Parliamentary Inquiry into Eskom In November 2017; and

Later in 2017 I made a copy of my Trillian computer public. At this time, this was the first sight of the ‘Trillian server’ made public.

My testimonies, affidavits and supporting data proved that:

Trillian and McKinsey had a significant working relationship in respect of the Top Engineers Programme at Eskom;

That Trillian did not have any employees to validate the paid invoices; and

Provided context which later supported Bowman’s efforts in reclaiming the ~R1,6Bn back from both McKinsey and Trillian.

Sometime in September 2016 I received a call from Thuli Madonsela’s investigation team requesting that I share all the information that I have on Trillian. At the time, I had resigned from Trillian and prior to my resignation from Trillian my husband had accepted a separation agreement from his employer.

Although the media were in a constant state of frenzy, reporting on State Capture, I found myself scared and afraid to blow the whistle because I was not sure if my evidence would in fact support the narrative. Additionally, my husband and I were afraid for ourselves and our family. My husband encouraged me to keep my head down and not approach the media nor law enforcement.

In the call with the Public Protector’s office, I was informed that I had a right to seek legal advice. Owing to the unemployed status of my household, I reached out to numerous legal firms seeking pro bono assistance towards my preparation for the Public Protector.

Through David Lewis and Corruption Watch, I received support from Peter Harris and Johan Roodt on a pro bono basis. Through consultations, they deduced that I was not in any way complicit and that my evidence was in fact helpful towards the investigations into State Capture particularly in respect of Trillian and McKinsey’s role in the Top Engineers Programme. They assisted me in sharing all my information with the Public Protector in September 2016. Alas, my evidence was submitted mere weeks before the ‘State of Capture’ report was to be finalized and could not be investigated thoroughly.

Through my relationship with Corruption Watch and David Lewis, I was requested to support Geoff Budlender’s investigation into Trillian during the first quarter of 2017. On meeting Geoff and his team, it was evident that they were not receiving information from Trillian and that many efforts were made by Trillian to restrict the success of the investigation. As I had a copy of my computer from Trillian, I was able to provide much of the information that Geoff and his team sought and needed. I spent many hours with Geoff and his team sharing information that I had on specific transactions and providing context for the way in which Trillian operated.

It was the findings from Geoff’s report based on my information, that finally raised the curtain on impropriety on the part of McKinsey and Trillian, specifically at Eskom.

The Parliamentary Inquiry into Eskom

I approached the Parliamentary committee in the first quarter of 2017 volunteering to provide my evidence into their inquiry. After about seven months of not receiving any feedback from them, I decided to blow the whistle publicly. Shortly after that, I was called to provide a testimony to the Inquiry which I did on the 3rd November 2017.

The trauma of state capture led to my divorce leading to two outcomes; I was able to dedicate myself to support Law enforcement, and I started treatment for PTSD.

Regardless of my weak mental state, I supported Bowman’s in their efforts to reclaim funds from McKinsey and Trillian with success. Again, I spent many hours trawling through data, compiling affidavits and attending consultations.

Through all of my actions which I have honestly done because I know that its simply the right thing to do, I remained unemployed, traumatized by my loss (divorce and my career) and am on the road to recovery from PTSD. Financially, I had to release my pension to support my daughter and I as I had no other source of income over these years. I sought no gains from helping this country and particularly, Eskom.

From my experience, becoming a whistleblower has been a full-time job in supporting the various investigative efforts, alas without the remuneration.

With the publication and subsequent media coverage of Mandy Weiner’s book: “The Whistleblowers”; I feel encouraged to write this letter to you.

Mr. De Ruyter, Eskom would not have succeeded in its High Court application to have ~R1,6Bn returned to it by McKinsey and Trillian had it not been for my actions, and possibly the actions of others too. Although Eskom finds itself in a better position, I am left in the worst conceivable place! I am a single mom who for some reason is ‘unemployable’. To Date, I have submitted over 2,500 job applications, all without success. This baffles my mind because my actions have demonstrated my integrity, my skills and competencies have not changed and my resilience has been publicly demonstrated. My reputation prior to Trillian was completely untainted.

My concern is that my story does not encourage others to stand up against wrong doing in our country. I don’t think that others would willingly lose everything to simply be perceived as a hero. This is unfortunately what happens to whistle blowers in South Africa. We make unquantifiable sacrifices for the betterment of our Country to be left near destitute. Why? Because people like yourself perhaps don’t take the time to recognize and thank the people who enable your vision and the success of the respective entity.

The United States of America have legislation which rewards whistleblowers for their courage. Through the successful return of funds, the whistleblower is both acknowledged and rewarded by receiving a small fraction (between 10% and 30%) of the successful civil claim. Alas, South Africa does not have such legislation nor do the leaders of this Country, both political and administrative (heads of our public entities) acknowledge their efforts. To date, I have received no recognition from Eskom for the numerous hours that I invested into their successful application let alone the recognition that my support of Eskom was in fact a trauma trigger.

Although I am glad that Eskom received the ~R1,6Bn, I am broke, have medical bills to pay for, disheartened by the fact that no one will employ me and can not afford to care for my daughter.

Does it make sense that Eskom receives the win at my cost?

Mr. De Ruyter, you find yourself in a position of leadership and influence not just in Eskom, but in this Country. You could leverage that to support and encourage whistle blowers. You could take an action that could encourage more Bianca Goodson’s and Cynthia Stimpel’s etc. You could take an action that tells South Africans that blowing the whistle against corruption is the right thing to do and that the Country will support them for their bravery. You could remove the stigma and consequence of doing the right thing.

Would you Mr. De Ruyter?

Would you be as brave as I was and perhaps start a societal revolution towards treating and perceiving whistleblowers differently?

If you consider my recommendation and act in a different way, do you think that South Africa would ever suffer from something called State Capture again?

Consider providing some of Eskom’s financial gains to the whistleblowers who have lost much in their efforts to promote Eskom’s cause. For both myself and the many whistleblowers out there who suffer a similar loss to me, financial support would go a long way in being able to retain their dignity and ability to support their loved ones;

Publicly acknowledge the whistleblowers who have supported Eskom’s success, individually and by name. Using that same platform, make it clear the benefit that their courage has had for Eskom;

Leverage the lessons learnt by these whistleblowers to strengthen Eskom’s processes, procedures and policies. Keep in mind that these whistleblowers have first hand experience of how your existing systems have failed to protect the organization against corruption. To this end, consider bringing these individuals into the organization to expediate these much needed “fixes”; and

Lastly, consider employing these courageous people. Their character is on public display and although they have lost much, their skill sets and competencies have not changed. An action such as this will defy any perception that whistleblowers are ‘trouble makers’.