The video entertainment business reduced losses from its Rest of Africa operations as it grew subscriber numbers by 17% to 7.7 million.

MultiChoice used the 2018 FIFA World Cup Russia, to drive subscriber growth across the continent, with the result that subscribers outside South Africa outnumber local viewers for the first time ever. MultiChoice now has over 15 million, pay-tv subscribers across 50 African countries.

In its maiden results since February’s unbundling by Naspers, the video entertainment business said it added a total of 1.6 million subscribers last year. The 12% lift took its overall active subscriber base to 15.1 million and was achieved despite continued microeconomic headwinds and pressure on consumer spending. Local subscriber growth of 8%, or 500,000, was outdone by the 1.1 million satellite and digital terrestrial viewers it added in its Rest of Africa (RoA) business.

Subscription revenue increased by 7% to R41.2 billion in the year to end-March, supporting overall revenue growth of 6% to R50.1 billion. Its Technology segment contributed R1.6 billion to revenue and R600 million to trading profit. Group trading profit rose 11% to R7 billion as it reduced losses from its RoA operation by R900 million. It removed a further R1.3 billion in costs through its cost optimisation programme. It reported a headline loss of R1.55 billion for the year and a headline loss per share of 353c after allocating a 5% stake in MultiChoice SA to its Phuthuma Nathi empowerment schemes as part of the Naspers unbundling. The rand’s depreciation against the dollar also resulted in unrealised foreign exchange losses of R1.49 billion for the period. Core headline earnings, which it considers the best measure of its sustainable business performance, increased by 10% to R1.8 billion.

The group said its balance sheet remained strong with R9.8 billion in net assets, including R6.7 billion of cash and cash equivalents. Combined with R3.5 billion in undrawn facilities, it said it had R10.2 billion available to fund its business plan.

It’s not paying a dividend for its 2019 financial year but says it remains on track to declare a dividend of R2.5 billion, or 569c per share, next year.

In the year ahead, the group will continue scaling its video-entertainment services across the continent, mainly in the middle and mass markets,” MultiChoice said.” Top-line volume growth combined with inflationary price increases and a focus on cost containment is expected to deliver a continued reduction in trading losses in the RoA and stable margins in South Africa and the Technology segment.”

The MultiChoice Group share price closed 2.19% up at close on Tuesday. 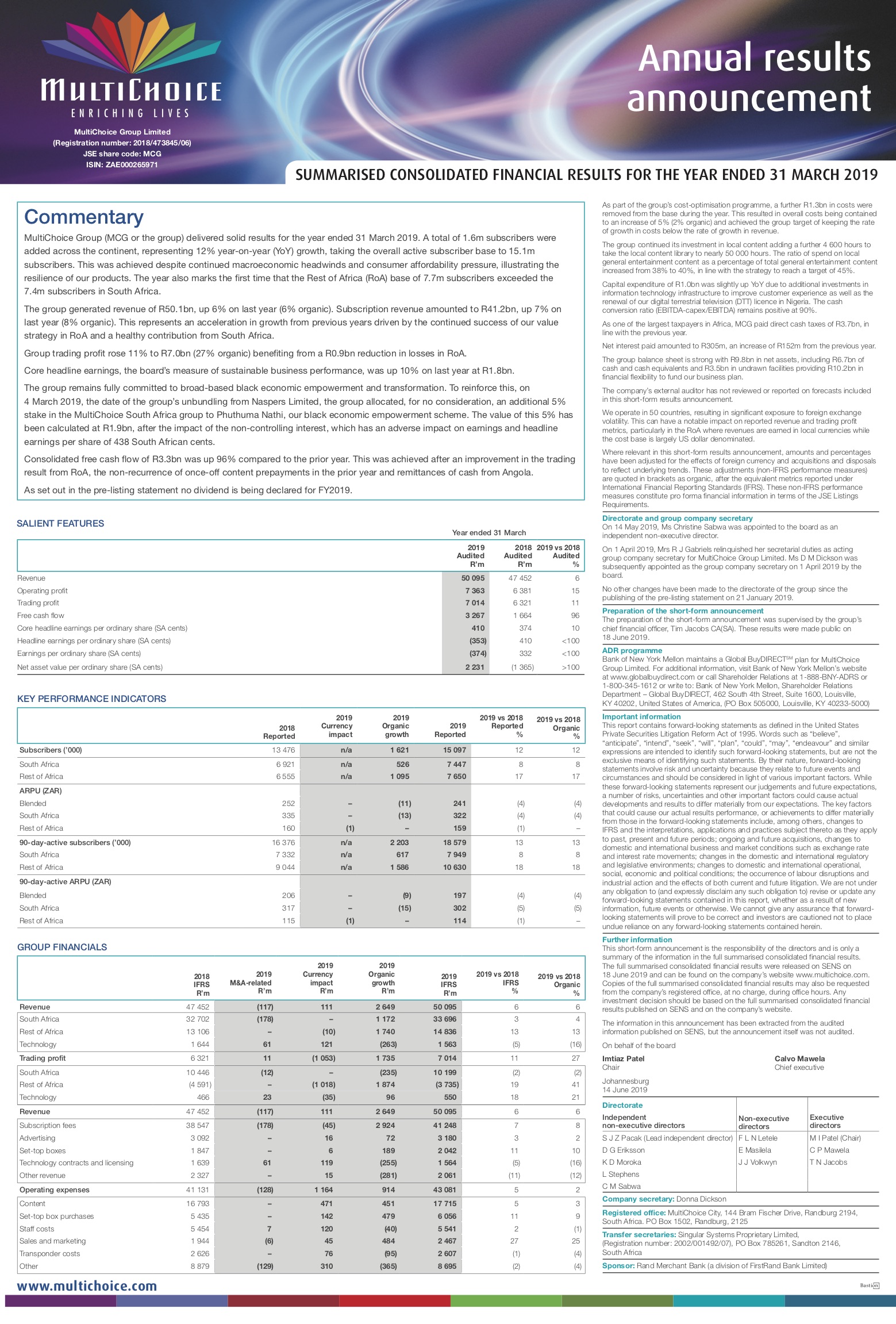