The video entertainment group says its strong balance sheet will support a maiden dividend at the end of the year.

MultiChoice says it remains on track to pay a maiden full-year dividend amounting to R2.5bn following a strong start to its 2020 financial year. And it’s almost halved trading losses at its African operations outside of South Africa as it continues to draw more viewers.

The video entertainment group added 1.2 million 90-day active subscribers in the six months to end-September, representing year-on-year growth of 7%. This took its subscriber base to 18.9 million households, including 8.2 million in SA and 10.7 million in the Rest of Africa (RoA). Last year, subscribers outside of South Africa overtook local viewers for the first time.

Revenue rose 4% to R25.7bn, held back by what it said was a strategic decision not to increase prices for its Premium bouquet in SA, where it has suffered erosion. It reduced losses in its RoA operation by R700m to R800m with the result that group trading profit improved by 22% to R4.8bn. It said its RoA business was impacted by hyperinflation in Zimbabwe, the ongoing drought in Zambia which had resulted in electricity shortages, and material currency depreciation in the Angolan kwanza and Zambia’s kwacha.

Core headline earnings increased by 24% to R1.9bn despite the 5% additional share allocation in its SA business that was given to shareholders of its Phuthuma Nathi empowerment structure following unbundling from Naspers and listing on the JSE in February. Excluding the once-off charge, core headline earnings would have been up 37%. Headline earnings per share jumped 337% to 341c. It didn’t declare an interim dividend.

The group continued to spend on locally content over the period, increasing the number of hours produced by 12% from a year earlier. As a result, it said total local content hours in its library exceeded 54,000 hours. Local content highlights included the launch of the first co-production, Trackers, and locally-produced The River.

As in South Africa, it said it was growing its investment in local content across the continent. It recently launched a localised version of Showmax in Nigeria, and a mobile-only Showmax offering in Kenya and Nigeria. It said the RoA business remained focused on driving scale and managing costs to return the business to profitability in the medium term.

Seasonality normally has a bigger impact on our second-half performance, both in terms of customer growth and costs, and will largely determine our full-year performance,” CEO Calvo Mawela said. “Combined with the risks associated with a weak macro- and consumer environment that appear to be deteriorating, we are cautious about expectations for the rest of the year.”

The group ended the period with R9.9bn in net assets on its balance sheet, including R6.9bn of cash and cash equivalents, after settling the R1.5bn dividend to Phuthuma Nathi and using R800m for share buybacks. 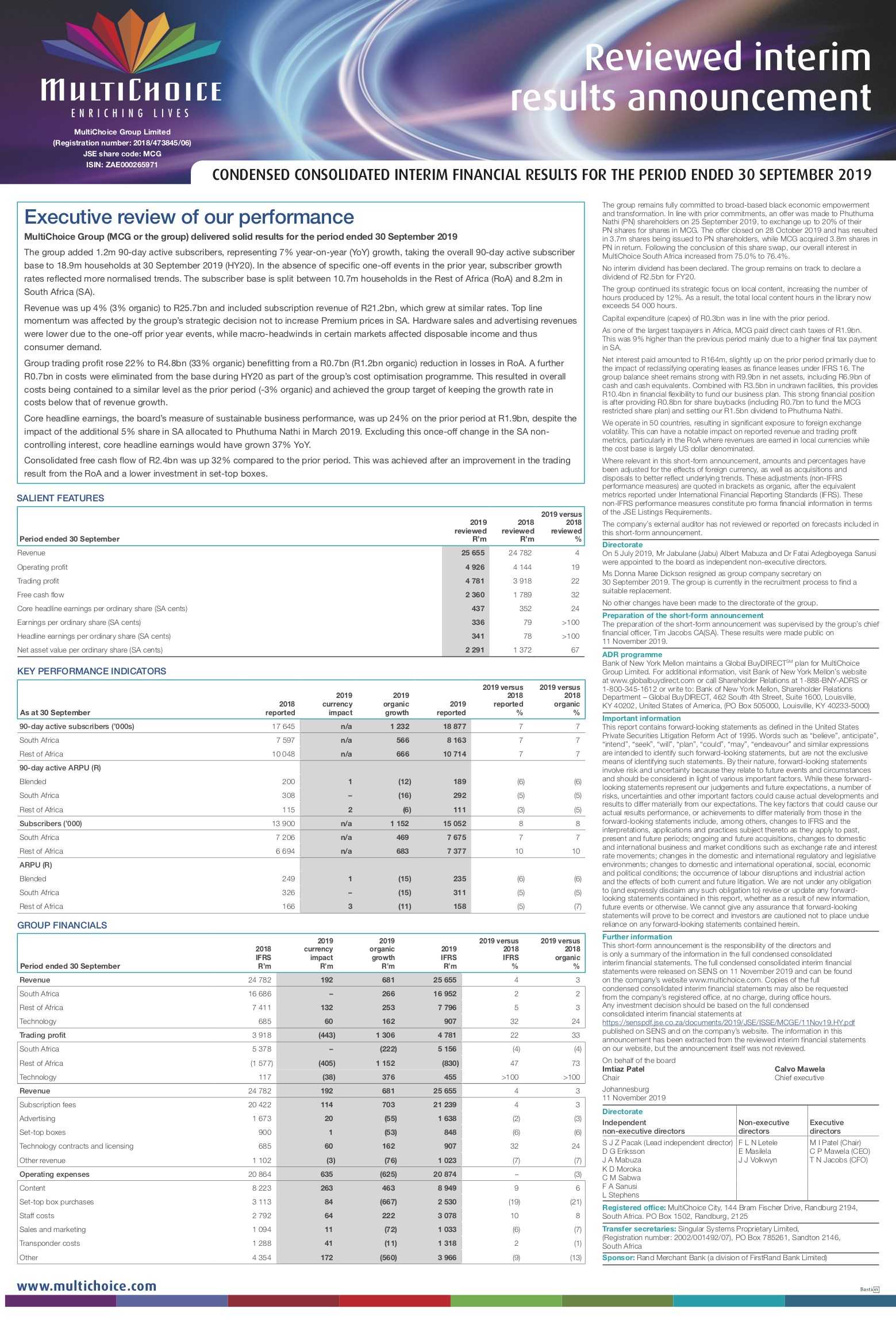