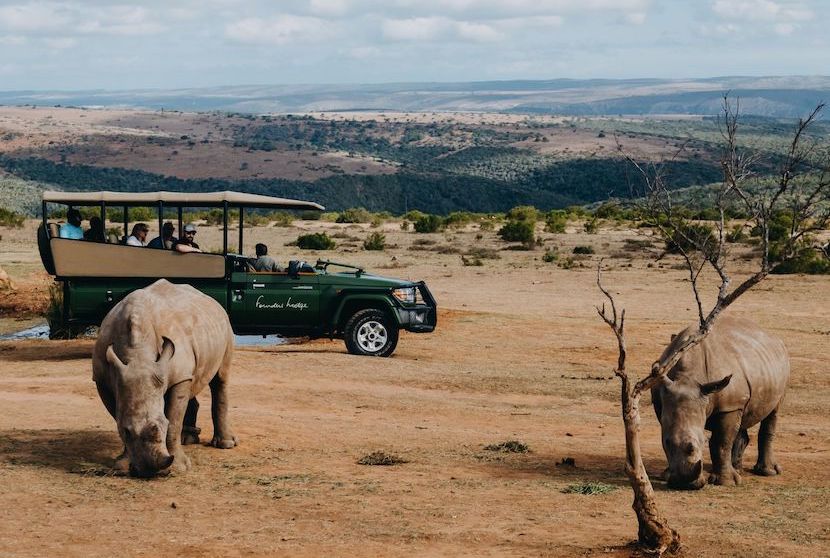 Following a decade of intensive rhino poaching, six years of drought in the Eastern Cape and the impact of the pandemic on ecotourism, the responsibility of caring for the rhinos at Mantis Founders Lodge is onerous. In this article we outline the challenges facing rhinos, what is being done about it and how you can help.

The major challenges facing the rhinos at Mantis Founders Lodge

What does Mantis do to protect rhinos?

What does rhino dehorning entail?

Rhino dehorning procedures involve the rhino being darted. Once sedated, a pen is used to mark the point of safe removal above the nerve-rich horn base. While anaesthetized, a chainsaw is used to cut the horn off horizontally. Eyes and ears are covered to protect them from noise and potential damage. The stump is trimmed to remove excess horn at the base, then smoothed and covered with pine tar to prevent cracking and drying. The whole process is painless and quick, taking around 30 minutes.

How can joining the Rhino Conservation Experience help?

Mantis Founders Lodge carries out routine check-ups on their rhinos to check their overall condition, take blood samples, check, or replace their tracking devices, check females for pregnancy and remove their horns.

You can seize the unique opportunity to join a rhino procedure when you book the Rhino Conservation Experience. This Mantis Impact Experience is a four-day immersion in the world of conservation, learning from expert conservationists, being part of the action and making a difference. When you book this experience, you help sponsor the critical conservation work that you will be helping with and play a part in preserving these iconic animals for future generations.

Be part of a conservation legacy. Travel with purpose.