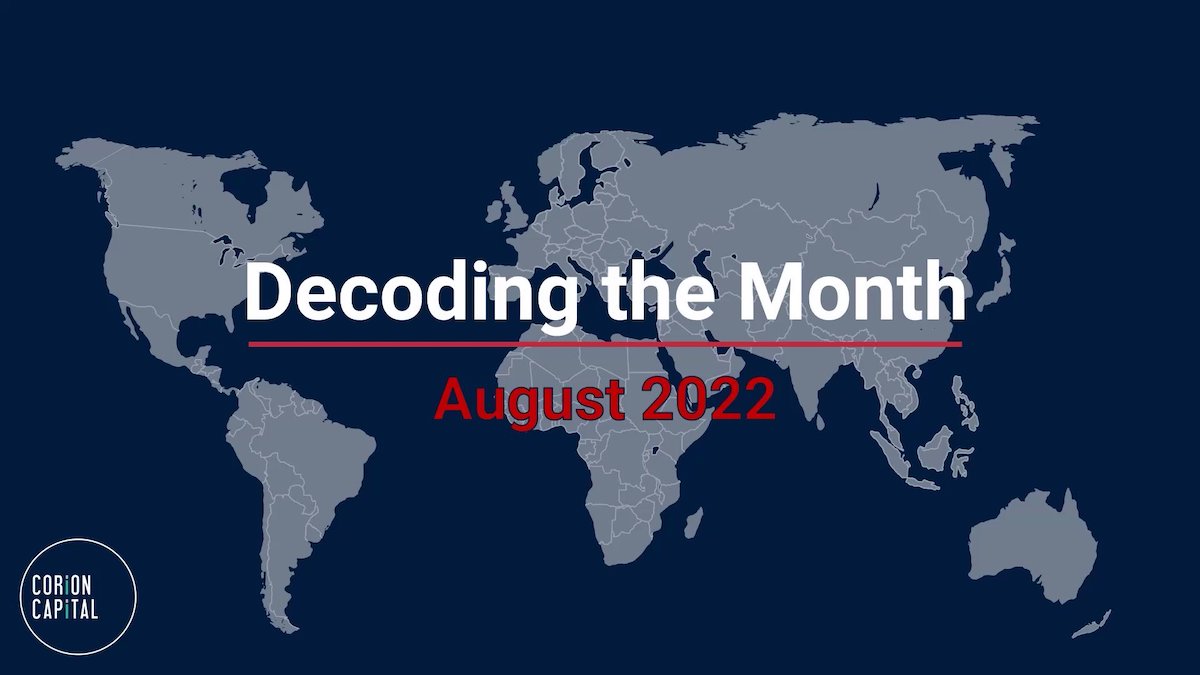 At the BizNews conference last week, David Bacher invested time with Sean Peche to better understand the whistleblower’s perspective on SA money manager performance fees – and was particularly interested in the way big companies restrict access to the investment platforms (which they own). He shares his conclusions on both aspects in this interview with Alec Hogg of BizNews. Plus Bacher also provides insights into the Corion Report, the regular review of investment markets over the past month – and takes a stab at a trifecta of accurate forecasts after being spot on with his predictions for July and August.

The market actually started the month quite strongly. But indeed, if you look at global markets down about close to 4% and if you recall our last couple of interactions, after the big draw down in June, we were saying it’s time to get back in the market and close your underweight position. And then you had the big July rally and we said, okay, well maybe it’s time to take a little bit off again. And that’s exactly what happened. The market rewarded investors lost on the show about the risk of a bear market rally and markets retreated. And, it’s not often that you get three or three interviews correct in a row. So now we’re going to communicate that because investing is a difficult game. And maybe next month, I’ll look a little bit silly.

You know, we don’t think it’s a time to be too brave. There’s a lot of headwinds out there. Inflation is still here, albeit coming off. Interest rates are still historically at low levels, and I think that’s going to take a long time to play out. Debt levels are extremely high across the board. And that’s not a great environment for risk assets. And if you take it relative to valuations and valuations, it’s always critical to why we invest at Corion. They are not cheap. We don’t think they’re expensive. And, we warned last time that over time, equities do go up. So you’re going to have a very, very strong case to be under way to risk assets over the long term. So, you know, we’re probably playing a little bit safe. We’re not taking big positions as we were over the last few months and being a bit more cautious and looking for opportunities when they present themselves as investments. You don’t go looking for opportunities. That’s when you see them and you think the odds are in your favour. Then you might make a play. But right now, at Corion we’re pretty much sitting on the fence.

On the funds that did well in the last month

It seems to be a collection of funds that have been more overweight: SA incorporated stocks as opposed to global stocks. I mean, the reverse played out in July. But August you had some big corporate actions. You had the take-out of Massmart as an example of South African domestic stocks doing well. So those funds that were overweight say in specific situations, less overweight technology, and high risk assets perform really well. And it was nice to see boutique managers continuing to do well. It’s been a good environment for them. They are able to invest in the smaller mid-cap shares and benefit from specific opportunities as opposed to, when they are at the mercy of big large cap runs, rallies or sell-offs.

You know, in terms of the performance fee discussion, I actually think Corion is well placed to weigh in on the discussion. That is because our traditional retail funds don’t charge a performance fee while our hedge funds that target a higher net worth in an institutional market do. So during this journey, we’ve learnt a lot about the pros and cons of both models, the operational complexity, the disclosure complexity. It’s not simple. But, you know, I think from our side we’ll be a bit opportunist, opportunistic to slight the practice of performance fees for retail clients relative to some of our competitors. Because as Cy Jacobs said at your news conference, we also see that there are many advantages of performance fees and we have had clients come to us saying, please rather drop your fixed fee and have a performance fee. So, you know, there’s pros and cons to both models. But, you know, I think most importantly, it is not the case of performance fees or no performances. It’s a case of what your total fee is. Are they appropriate for the value provided and are those fees disclosed in an appropriate manner? And I think that’s where the discussion should be made, not if performance fees are a bad thing or a good thing. What are your total fees and does your client understand that and is it appropriate?

I think it’s very unhealthy for a thriving market. The more successful industry participants, the more competition, the more consumer choice, the more employment, the more liquidity on the JSE and I’d argue the better the prospect determination in the local market. So, I’m talking from personal experience, thankfully currency is now eventually getting flows into our business on the back of years of consistent performance and knocking on doors. But it’s been a long journey. It’s been a journey where the odds are stacked against the smaller managers. And now I think that the end consumer also needs to understand and our experience is that the clients take comfort or perceived comfort in the big names. And I think the safety and the superior skill and in turn, the financial advisers know it’s easier to sell into that market. So they promote the larger managers because it makes their products a lot more appealing and is a bit of a vicious cycle. But that practice doesn’t necessarily result in a better investment outcome for the investor. There is no additional risk if you invest in a collective investment scheme from a smaller manager as opposed to a larger manager. The regulatory environment is a level playing field.

On how Corion would be allocating assets

I think the topic of today would be the strong dollar and the dollar’s surge. And you know what? It is difficult, impactful for emerging markets, for imports, for exports, and most importantly, for portfolio diversification. The mighty dollar’s recent surge against major currencies, you know, could have been going to reverse the two previous big runups that ended badly for the dollar. And we understand why the dollar’s surging. But, from our side, it’s probably time to look at other currencies as well. The yen, the euro – at two decade lows relative to the dollar – we’re probably going to be moving a lot more of our dollar exposure to other currencies, you know, just to make sure we’ve got the appropriate diversification, should the dollar retreat from these very high levels.