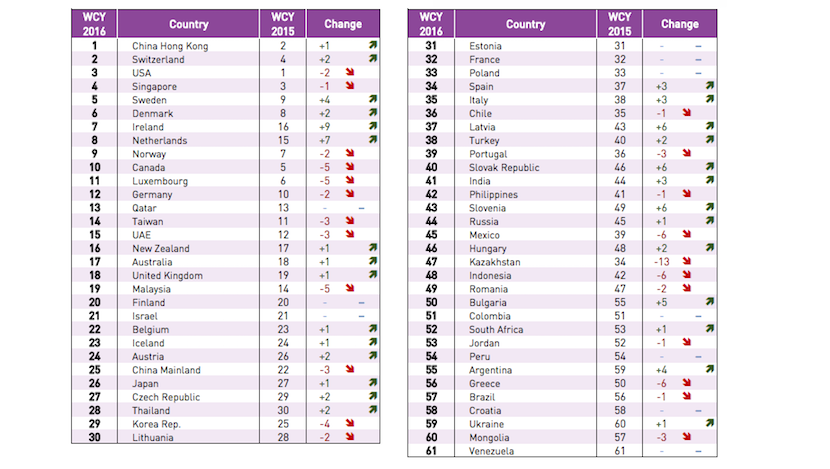 The latest Global Competitiveness Report sees South Africa swapping places with Jordan (yes, that small Middle Eastern country) to edge up from 53rd to 52nd of the 61 countries surveyed by the IMD. The country continues to underperform: its natural position should be in line with the size of its population (16th of those in the IMD’s survey) or at the very least in terms of the size of its GDP (30th). The country came stone last in its rate of employment (worse even than regular wooden spoonist Venezuela); bottom on the list for “relocation threats of production” (i.e businesses wanting to leave); labour relations; life expectancy at birth; and infrastructural health problems. Despite still boasting the best economic performance in the world, the United States is no longer the most competitive. It falls into third sport behind new leader Hong Kong and Switzerland in second. IMD, one of the world’s premier business schools in Switzerland, creates the annual ranking of the competitiveness of the world’s economies, and has been publishing them since 1989. And while South Africa may have slipped to the third largest economy in Africa, it’s regarded as the continent’s most competitive (a full report below) because it’s the only country surveyed by the IMD. – Stuart Lowman

LAUSANNE – (May 30, 2016) – The USA has surrendered its status as the world’s most competitive economy after being overtaken by China Hong Kong and Switzerland, according to the IMD World Competitiveness Center.

The sheer power of the economy of the USA is no longer sufficient to keep it at the top of the prestigious World Competitiveness Ranking, which it has led for the past three years.

The IMD World Competitiveness Center, a research group within IMD business school, has published the ranking each year since 1989 and it is widely regarded as the foremost annual assessment of the competitiveness of countries.

Professor Arturo Bris, Director of the IMD World Competitiveness Center, said a consistent commitment to a favourable business environment was central to China Hong Kong’s rise and that Switzerland’s small size and its emphasis on a commitment to quality have allowed it to react quickly to keep its economy on top.

“The USA still boasts the best economic performance in the world, but there are many other factors that we take into account when assessing competitiveness,” he said.

“The common pattern among all of the countries in the top 20 is their focus on business-friendly regulation, physical and intangible infrastructure and inclusive institutions.”

A leading banking and financial center, China Hong Kong encourages innovation through low and simple taxation and imposes no restrictions on capital flows into or out of the territory.

It also offers a gateway for foreign direct investment in China Mainland, the world’s newest economic superpower, and enables businesses there to access global capital markets.

China Hong Kong and Singapore aside, however, the research suggests Asia’s competitiveness has declined markedly overall since the publication of last year’s ranking.

Taiwan, Malaysia, Korea Republic, and Indonesia have all suffered significant falls from their 2015 positions, while China Mainland declined only narrowly retaining its place in the top 25.

The study reveals some of the most impressive strides in Europe have been made by countries in the East, chief among them Latvia, the Slovak Republic and Slovenia.

Western European economies have also continued to improve, with researchers highlighting the ongoing post-financial-crisis recovery of the public sector as a key driver.

Meanwhile, 36th-placed Chile is the sole Latin American nation outside the bottom 20, whileArgentina, in 55th, is the only country in the region to have improved on its 2015 position.

Each ranking is based on analysis of over 340 criteria derived from four principal factors: economic performance, government efficiency, business efficiency and infrastructure.

Responses from an in-depth survey of more than 5,400 business executives, who are asked to assess the situation in their own countries, are also taken into consideration.

Professor Bris said: “One important fact that the ranking makes clear year after year is that current economic growth is by no means a guarantee of future competitiveness.

“Nations as different as China Mainland and Qatar fare very well in terms of economic performance, but they remain weak in other pillars such as government efficiency and infrastructure.”

Data gathered since the first ranking was published more than 25 years ago also lend weight to fears that the rich are getting richer and the poor poorer, said Professor Bris.

“Since 1995 the world has become increasingly unequal in terms of income differences among countries, although the rate of increase is now slowing,” he said.

“The wealth of the richest countries has grown every year except for the past two, while the poorer countries have seen some improvement in living conditions since the millennium.

“Unfortunately, the problem for many countries is that wealth accumulation by the rich doesn’t yield any benefits for the poor in the absence of proper social safety nets.

“Innovation-driven economic growth in poorer countries improves competitiveness, but it also increases inequality. This is obviously an issue that demands long-term attention.”