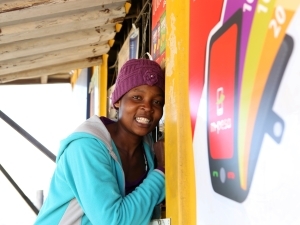 From acquiring one million users over four years, to signing up 10 million users in five – this is the turnaround Vodacom is hoping for, as it tries for the second time to get its M-Pesa mobile money service off the ground in SA.

But, is Vodacom’s ambition of having about a third of its user base – across all income groups – signed up to its mobile money platform by 2019 realistic? Only time will tell, say industry observers, but the operator is finally on the right track.

First launched in Kenya seven years ago, M-Pesa (Swahili for mobile money) was launched in SA in September 2010 – the product of a partnership between Vodacom and Nedbank. The origins of M-Pesa, however, lie further afield: the service was originally created as a pilot funded by Vodafone and the UK Department for International Development in 2003.

Herman Singh, Vodacom’s managing executive of mobile commerce and Standard Bank’s former head of Beyond Payments, yesterday admitted it was a lapse in judgment from the onset that led to the relative failure of M-Pesa in SA. “Previously, we did a cut and paste, [but] SA is not Kenya.”

More than 70% of the adult population in Kenya uses M-Pesa today.

Successful companies learn from their mistakes, says ICT veteran Adrian Schofield. “It is a management principle that such companies learn to ‘fail fast’ – and [Vodacom’s M-Pesa] seems to be a good example.”

Vodacom CEO Shameel Joosub said yesterday – at the culmination of an 18-month revamp journey – it had been a “learning process” getting to understand exactly what would and would not work in SA. “We’ve taken the experience and knowledge gained from the past four years, and have used this as the basis for a comprehensive redesign of M-Pesa for the South African market.”

Ovum analyst Richard Hurst says the new design of M-Pesa and Vodacom’s fresh approach, which sees services tailored to local market conditions and user behaviour, will place the company in a better position to make the product and its services work in SA. “M-Pesa will, and should, assume a position in the total variety of value-added services offered by Vodacom, so there will certainly be revenue gained.”

Hurst says there is “certainly” room for a service like M-Pesa in SA, and it would have been premature for the operator to abandon the concept when it learnt it was not gaining traction – and therefore not generating significant revenue – in the local market.

Joosub notes that, while Vodacom is likely to lose money on the revamped M-Pesa service to start with, it is ultimately intended as a money-making venture and he expects good returns.

Japie van Niekerk, MD of Bidvest (Vodacom’s new M-Pesa financial services partner), has expressed steadfast confidence in the revamped product’s potential to rake in revenue. Vodacom and Bidvest have a revenue-share agreement, although the entities are not prepared to disclose what this is.

Schofield says the mobile money opportunity did not go away just because Vodacom initially used the wrong “vehicle” to deliver M-Pesa. “Any service that holds or transacts with ‘my’ money succeeds if it is trustworthy, reduces the risk of loss for me, costs little and is available when I need it.”

The key to long-term engagement, he says, is likely to be the reliability of the service (uptime) and how quickly access to money is restored if a phone is lost, stolen or broken.How much does M-Pesa cost?