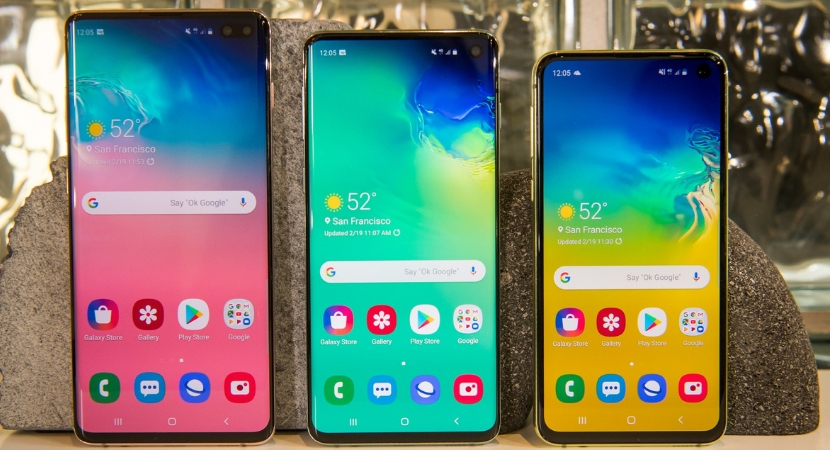 JOHANNESBURG — South Korean electronics giant Samsung has lifted the lid on its new range of version 10 smartphones with promises of 5G connectivity and improved features. In addition, there’s even a folding phone – signifying a trend by phone makers trying to innovate in a market where, for years, little innovation has actually really taken place. Yes, smartphones have incrementally improved each year, but without a Steve Jobs-style moment of brilliance, the market has matured and even stagnated. Added to this, Samsung has growing competition in the form of China’s Huawei, which increasingly has offered high-quality devices at much lower price points than its competitors. – Gareth van Zyl

(Bloomberg) – Samsung Electronics Co. debuted its most extensive new lineup of smartphones, taking on Apple Inc. in a slowing market with 3-D cameras, an in-screen fingerprint scanner and faster 5G connectivity and a device with a folding screen.

The South Korean technology giant introduced four new phones in its Galaxy S range – the S10, S10+, S10e, and S10 5G. The S10 and S10+ are direct successors to last year’s S9 and S9+, while the S10e and S10 5G are two new models for the company: a low-end phone aimed at Apple’s iPhone XR, and a high-end version priced above $1,000. It also showed off the Galaxy Fold, a smartphone with a screen that expands to tablet size.

Samsung’s success with its latest gadgets will be a barometer for a global smartphone industry struggling to revive momentum after a decade of robust growth ground to a halt. Global shipments fell last year to 1.43bn units, marking the first time the figure had slid on a full-year basis, according to Strategy Analytics.

In using the new Galaxy phones (briefly), Samsung is beating Apple to triple camera by 7 months, 5G and rear 3D by ~ 1.5 years, and screen design by ~1.5 – 2.5 years. But their software/services feels 1-2 years behind.

Consumers are holding on to their phones longer and spending less on upgrades, putting pressure on manufacturers to bolster innovation and justify their price tags. With premium mobile phones that can cost well over $1,000 a piece, customers have also been turning to lesser-known companies, which has given rise to Chinese companies such as Huawei Technologies Co., Xiaomi Corp. and Oppo.

In China, Samsung has been almost driven out of the phone market, and globally it faces losing the title of the world’s biggest handset maker to Huawei. Samsung sold 291m smartphones last year while Huawei sold 206m, according to StrategyAnalytics.

“The introduction of the Galaxy S10e is likely a response to the premium-price fatigue now plaguing the industry,” Wayne Lam, a mobile devices analyst at IHS Markit, wrote in an email. “Samsung’s fortune in China may very well rest on the revitalized Galaxy S10 product line.”

Samsung’s stock fell about 1% on Thursday morning in Seoul.

Samsung will probably sell more than 40m Galaxy S10 units in the first year of release, Counterpoint said in an email. That would be more than the Galaxy S9 for the same period, but fewer than the Galaxy S7, Samsung’s best-selling S-series smartphone, it said.

The S10 and S10+ include 6.1-inch and 6.4-inch screens respectively, up from 5.8 inches and 6.2 inches on last year’s models. The front-facing cameras sit inside holes cut into in the display itself as an alternative to including them in a “notch,” as the iPhone does. The displays also now have in-screen fingerprint scanners, a new approach that diverts from the 3-D facial recognition scanner employed by Apple in its latest devices. They also add a third back camera as a wide-angle lens. Those models start at $900 and $1,000 respectively.

At its San Francisco event, Samsung also announced a pair of key partnerships for the new devices. Adam Mosseri, head of Facebook Inc.’s Instagram photo-sharing app, announced that an Instagram mode would be integrated into the new camera application. It lets people upload photos and videos directly to the Instagram Stories feature and use the app’s filters. Samsung also said it is working with Adobe Inc. on an optimised version of its Premiere Rush CC video editing app.

“The foldable design, especially the hinge, is more refined than many other competing solutions,” said Bryan Ma, vice president of devices research at IDC. “But there are still a number of challenges around hardware – thickness, crease, battery, reliability, price – as well as software. It won’t be a big volume mover at that price, but keep in mind that notebook PCs used to cost $2,000, too, before they reached more affordable price points.”

Even with Apple’s strong market share in regions like the U.S., the new Samsung line could pose a serious challenge to iPhones. Samsung is beating Apple to the punch by about half a year with features like triple-camera photography, and by at least a year a half with 5G and a rear-facing 3-D camera.

Samsung is also launching a low-end $750 model, which has a 5.8-inch screen, lacks the in-screen fingerprint reader (it’s on the side of the phone instead), and has only two rear cameras. Its bezels, like the iPhone XR versus the high-end iPhone XS line, are also slightly thicker.

Samsung previewed a 5G model, which in addition to faster web download speeds, includes front and back 3-D depth cameras for more professional-looking photos and augmented reality, a larger battery, and a 6.7-inch screen. Its overall footprint, however, is similar to the S10+ model.

“Samsung’s budget phone is expected to do well in the Middle East, Africa and Asia, excluding China,” said Liz Lee, an analyst at Counterpoint Research. “In terms of marketing, the 5G model provides a comparative advantage and could bring life back to a stalled smartphone market.”

The S10, S10+, and S10e go on sale March 8, while the 5G variant will launch later in the first half of this year, Samsung said. In the US, it will debut as an exclusive to Verizon, and it will later expand to other carriers. The 5G model will come to Europe after the U.S. and South Korea, with network partners expected to announce further details at the Mobile World Congress in Barcelona next week.

All of the phones will work with a new feature called Wireless PowerShare, which lets users charge a phone or wireless headphones by tapping it to the back of one of the new Samsung models. It also debuted new Galaxy Buds headphones, competitors to Apple’s popular AirPods.