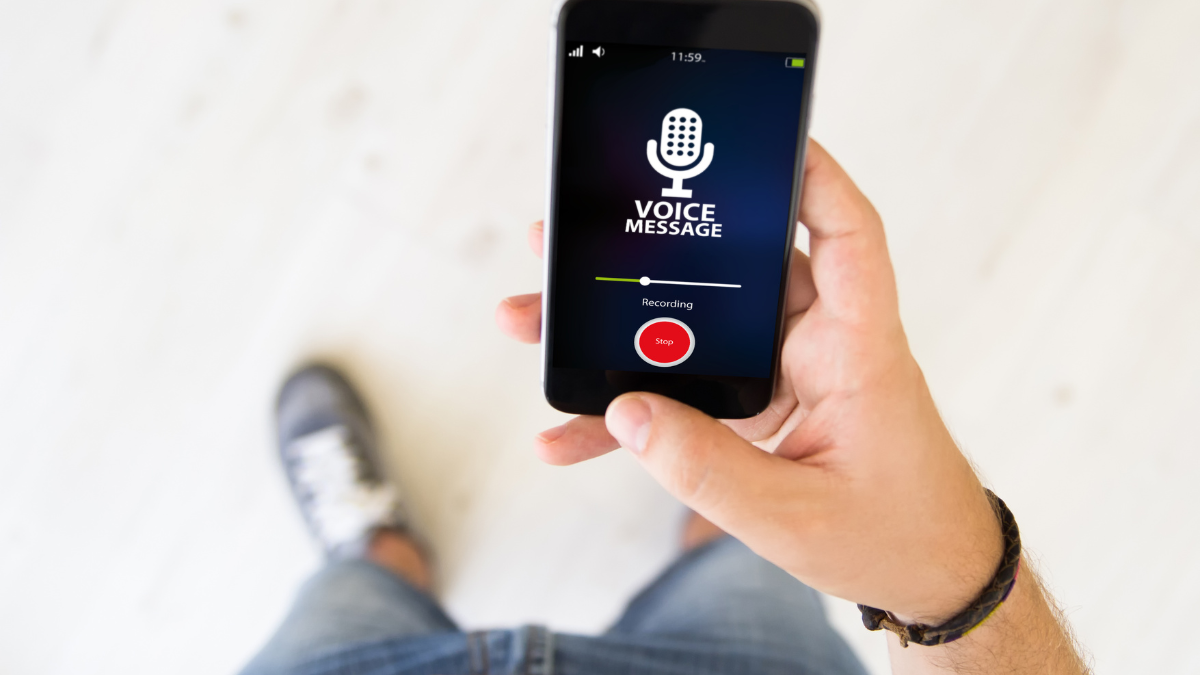 Elon Musk often talks about how humans are already Cyborgs, just with low bandwidth output, referring to the fact that most people have access to instant, far-stretching communication with messaging, video calls, emails as well as a plethora of information on the internet. But we are limited by the rate at which we can output information because our thumbs can only type so fast. (We are already cyborgs | Elon Musk | Code Conference 2016). One way to override this is by using something recently added to many messaging services and one which many are beginning to use. Voice messaging. Rather than a phone call which can’t be addressed at any time or typing out a long message which takes time and can be quite frustrating, simply recording your voice and sending it through as a message is an efficient way to get relevant information across. But what are the best ways to use this messaging feature? More in this article from The Wall Street Journal. – Ross Sinclair

The Year of the Voice Message: A Modern Guide to Phone Etiquette

Forget texting. These days, everyone is sending each other short recordings of their voices, but the response isn’t always enthusiastic. Here, how to send yours with tact.

NATHAN HEINRICH, 41 years old, feels totally disconnected from his younger sister. It isn’t as if they’re estranged. In fact, the writer and designer from West Nyack, N.Y, says they’re in touch plenty. The problem: This year, she suddenly started communicating exclusively through recorded voice messages, colloquially called voice notes or voice memos, a feature that’s been available on Apple’s iMessage since June 2014.

His sister, Hilary Heinrich, a busy 32-year-old teacher in San Luis Obispo, Calif., says the technology nicely combines aspects of both phone calls and texts. “It allows me to have a continuous conversation that I can pick up at any time, on my availability,” she said. Mr. Heinrich, however, finds that having to respond to her voice notes in kind makes him feel like a trucker on a CB radio. “Traffic ahead going southbound on I-90. Over. Hope you had a great weekend. Over.”

The voice message—a casual recording of your voice usually sent in lieu of a text—is relatively new in the history of digital communication. As intriguing, personal and convenient as some find the technology, its unfamiliarity and the risk of jarring those who prefer more traditional communication has prompted the need for a whole new array of etiquette.

Chinese communication app WeChat introduced the medium in 2011, and it was later added to WhatsApp, iMessage and many other apps. The feature was rarely user-friendly: One was forced to press on tiny record icons while speaking and there was no way to review your message before sending, or to scrub back and forward through a message you’d received. But for many, especially as the feature has gone mainstream and interfaces have improved, the voice note offers a happy medium between a call—too urgent, particularly if your recipient is under the age of 30—or a text.

According to a YouGov survey conducted in the U.K. this past June, 22% of respondents with smartphones said they like receiving voice messages, while 25% disliked doing so. Meanwhile, only 16% said they like sending them, while 36% reported that they do not. Divisive as the medium is, it continues to grow. “Voice messaging is one of our most popular features with over 7 billion voice messages sent daily,” said Zafir Khan, head of consumer product at WhatsApp. “Sometimes it’s more than what you say, it’s how you say it too.”

This is precisely why Laurie Parres, 58, a TV writer in Los Angeles, says she sends so many voice notes. In her mind, they ensure her words can’t be misconstrued by distracted colleagues, or friends who just woke up in a different time zone. “Voice messages save me,” she said.

Others find them bothersome. “I absolutely despise it when people use voice notes over just plain old texting,” said Talla Kuperman, 41, a jewelry designer in Austin, Texas. “I actually find it very selfish.” She doesn’t like how time-consuming it is to listen to them—without a universal decorum for the voice message, she has found people send meandering messages, when a scannable text would do.

Other issues: Depending on your abilities and needs, voice notes can be a burden. Anyone who’s hard of hearing, for example, is disadvantaged. “Actual text messages are infinitely more accessible,” said Jacob deHahn, 26, a designer in San Francisco. Mr. deHahn’s primary experience with voice messages has been through Instagram, where he’s posted about being deaf. “I get disheartened if someone sends [me a] voice message… It’s almost like they forget that it’s inaccessible,” he said.

But they can also be a boon. Robin Shear, 50, a life coach in Onsted, Mich., experienced this after incurring a concussion in a ski accident. During her months-long recovery, she found texting and phone calls taxing. Voice notes let her stay connected. “Long phone calls were a little too hard for me to focus on without causing symptoms, but short voice messages were perfect,” she said. Those with mobility issues that affect dexterity, too, may find voice notes easier to send than texts.

The need for personal connection during lockdown might help explain why expressive and tone-sensitive digital communication has become so popular. Platforms like Bumble, a dating app, used the moment to expand its voice-based messaging. Vivienne Sung, vice president of product, reports that people were increasingly using Bumble’s in-app voice call and video chatting features during the pandemic. Once the app added voice notes in 2020, she says people adopted that medium too, since it let them form deeper connections without taking the leap to a call.

Even if we collectively work our way toward the universal decorum Ms. Kuperman craves, some, like Mr. Heinrich, might always prefer texts. “If I have to communicate like that,” he said of voice notes. “I’d rather just send a pigeon. At least then I’d have the bird to keep me company.”

For others, even the best-crafted text can’t deliver the nuances a human voice can. “A voice note is uniquely and only me,” said Ron Blake, 53, an artist in Phoenix. “A text message is cold and impersonal… My voice tells a story that a text message can’t convey.”

Mind That Mouth of Yours

Planning to send voice notes? To make sure they don’t alienate or annoy your recipients, heed these tips.

DO: Consider if it must be a voice note

If you’ve got a funny story to tell about a bad date who insisted on speaking in a Transatlantic accent, a voice note might offer the best medium to properly highlight the absurdity. Ham it up! But if you have something important or complicated to say, sending a voice note might be inappropriate, since it makes it harder for your recipient to revisit the information. As a good rule of thumb, don’t send anything via voice message that might need to be reviewed more than once.

DON’T: Make it too long—or too short

Listening to a voice note often requires someone to put whatever else she’s doing on pause. Respect her time by keeping things brief, but not so brief that it could have just been a quick one- or two-sentence text. Under a minute is the sweet spot before things get tedious. This gives you plenty of time to say something that might have been too long to write out over text without making your recipient feel as though you’ve subjected him to a personal podcast.

DO: Think of your audience

Before hitting record, consider how your conversational partner has responded to voice notes in the past. If he or she was hostile, try a call. Remember too that your recipients aren’t likely just sitting around waiting for your messages. They might be running errands or spending time with family. Maybe they’re wearing headphones, but there’s a chance they could be listening to your message within earshot of others. At minimum, be aware that someone else might hear your note. So stay classy!

Loud, crowded locations are not the best places to record voice notes. Even if the microphone on your phone or headphones would be able to record your voice, it’ll probably also pick up everything around you. That would make listening to your voice note a pretty terrible experience. Moreover, any environment where it would be inappropriate to make a call—say, a library—is equally inappropriate for sending a voice message, even if it’s brief.

DO: Text your recipient beforehand

Mediate the etiquette issues of the voice note by simply offering a quick warning to your recipient before sending one. For example, “I’ve got to tell you a story about how I just ended up on stage at a Blue Man Group concert I didn’t even have tickets for,” or “Can I tell you my theory about Shrek’s ancestry via voice message?” Giving a bit of context might make a broadly anti-voice note person feel more open-minded toward the masterpiece you’re about to send her way.

DON’T: Expect one back

Clearly, voice notes aren’t for everyone. Just because they’re your thing and you think they’re the height of communicative convenience doesn’t mean all the people you send one to will feel the same. Or maybe they’re just busy! Regardless, if they wanted to send a voice note, they would. It’s fine for one person to respond via voice message and one to respond via text, but if your recipient gives any indication that the voice messages aren’t currently convenient for him, you should switch to texts, too.

DO: Have some fun with it

The benefit of the voice message is that it’s your voice. If you’re going to use the feature, you might as well make the most of it. Context is key, but use the message as an opportunity to explore the full range of inflections your vocal cords can achieve. Break out into song. Spin your yarns in funny voices. Incorporate background noises into your production. Make the note an experience for both you and your recipient. If you’re going speak in monotone, you might as well just send a text.

A recurring complaint among voice-message detractors is that voice-note fans rarely communicate in any other way, even when their thoughts would be better served by other formats. This can make a recipient feel isolated, especially if your casual, tossed-off recordings don’t fully engage with her texts. Noticing an imbalance between the number of voice messages you’re sending and the number you’re getting back? That’s another sign to choose a new method. Heard of a phone call?

Since When Did Everyone Start Sending Voice Notes? It’s a Tale as Old as Time.