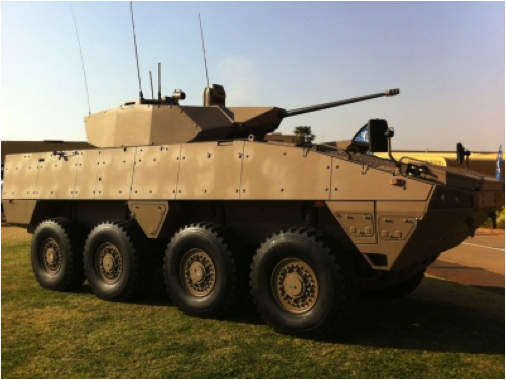 “Defence” is the euphemism politicians use to justify a war machine. A few years ago I had an informal conversation with a since departed cabinet minister. He was doing his best to justifying infamous Arms Deal “investments” and winked when I asked him whether he regarded the increasingly deranged Robert Mugabe as a military threat. I didn’t have the heart to follow up with a question about why submarines were needed to repulse a non-existent Zimbabwean Navy. As he explains in what follows, regular Biznews.com blogger Alexx Zarr is a bit of a military man. So applied his analytical mind at the replacement to the long-serving Ratel ICV. And concludes with key questions: at this stage of its development, can SA afford guns AND butter? And if so, exactly how many guns are appropriate?  – AH

As soon as we think something is simple, we discover it is not.  How annoying.

One of my hobbyhorses is military matters. Military history, military equipment and technology, strategy, the minds behind the slaughter, battles past and possible future ones.  During the past week I came across another media snippet about a final (but maybe not final) decision by the South African National Defence Force (SANDF) to ‘acquire’ (that feels like something other than ‘buy’) 238-odd fourth-generation infantry combat vehicles (ICV).

An ICV (or infantry fighting vehicle – IFV) is a generic name for either a wheeled or tracked armoured vehicle that can fulfil a number of military and/or policing functions.  The generic vehicle frame can be configured to carry soldiers, which makes it a troop carrier.  It can have a turret fitted with a small(ish) calibre cannon, and be used in fire support of disembarked troops and tank formations.  IVCs can also be configured to accommodate indirect fire weapons, such as mortars.  There is the missile-carrier version – either anti-aircraft or anti-armour types.  Lastly, there is also a command and control option.

South Africa’s goody order includes five of these options (it excludes the anti-aircraft variant).  The South African models will be called the Badger.

@alechogg I guess it depends on who's bread is being buttered and for how much?

The plan to replenish the aging stock of Ratel ICVs has been brewing since 1995, when a tender was placed by the SANDF for a new ICV.  The project goes under the name “Hoefyster”.  The winner of the tender was a consortium between primary contractors, Denel Land Systems and Patria AMV of Finland.

The plan and order book have swung around somewhat since the deal was signed.  The plan is to use the existing Patria platform, re-designed and configured for South African requirements.  The media statements have stated that South Africa will enjoy 70% of the value of the program over a ten-year production phase.  The total number of units ranges between 238 and 264, but it seems that the smaller number is the final one.  Let’s not quibble about 26 units.

The foregoing is the simple part, now comes the not so simple part.  Here are the questions that arise, for me.

The enduring question for me is; what enemy are we fighting?

I see poverty, unemployment, poor education, deteriorating infrastructure, hunger, civil riots and anger, insolent politicians and indifferent executives.  I do not have any external enemies on my radar.

In my mind’s eye, I see that simple production function, where we have to choose between two options, guns and butter.  It seems to me, that in South Africa for the next 20 years, it is not guns and butter, but rather butter without the guns.