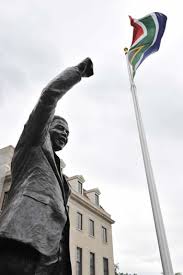 At his funeral on Sunday, the spirit of South Africa’s icon Nelson Mandela will be released through the slaughtering of an ox and other traditional rights of the Xhosa people. The insightful piece below by Sibongile Khumalo offers an inside view of the ceremony. It will be the last but one event in a week of goodbyes for the country’s first democratically elected president. On Monday, the Union Buildings in Pretoria will be renamed the Nelson Mandela Amphitheatre, exactly 100 years since the Sir Herbert Baker-designed Union Buildings in Pretoria became the workplace for bureaucrats and professional politicians. The ceremony will include the unveiling of a 9m high statue (see bottom story). – AH

Traditional Xhosa rites, including the slaughtering of an ox, will accompany Nelson Mandela’s burial in his boyhood home of Qunu on Sunday, clan leaders say. Following a formal state send-off in the capital Pretoria, tradition will take centre stage in a ceremony to be attended by global leaders and specially invited guests. Overseen by male elders of his clan, the burial will take place inside the family’s expansive estate, perched on a hilltop overlooking the rolling plains of the Eastern Cape region.

The slaughtering of an animal — a ritual performed through various milestones of a person’s life — will form a crucial part of the event.

“A funeral is an intricate ceremony that involves communicating with the ancestors and allowing the spirit of the departed person to rest,” said Chief Jonginyaniso Mtirara of the Thembu clan that Mandela hails from. The spilling of animal blood is a very important part of the burial process.”

An ox will be slaughtered in the morning of the burial, to accompany the spirit of the deceased. During the ceremony, Mandela will be referred to as Dalibhunga — the name given to him at the age of 16 after undergoing the initiation to adulthood. Cries of “Aaah! Dalibhunga,” shouted three times, will greet his body as it arrives home, and will be repeated during the ceremony as people pay their last respects.

Xhosa mourners will wear traditional Xhosa regalia, with blue and white beaded head gear and necklaces. Xhosa speakers are divided into several groups, including the Thembu people, of which Mandela is a member.

Although Mandela never publicly declared his religious denomination, his family comes from a Methodist background. His marriage in 1998 to his third wife Graca Machel was conducted by a Methodist Church priest, Mvume Dandala, with blessings by various faith leaders including a rabbi.

The commission of traditional affairs in the Eastern Cape region has told the government to “take a back seat” in the preparation and conduct of the burial ritual. “If the government intervenes, the ancestors will not accept and welcome him, and this will have a detrimental effect on the family members left behind as his spirit will come back to haunt them,” said the head of the commission, Nokuzola Mdenge.

Local people and private contractors have been carefully preparing the family graveyard, shielded from public view by a stone wall and shrubbery. The site is where three of Mandela’s children were reburied in July after their remains were exhumed from Mvezo village, Mandela’s birthplace, after a family dispute. In many rural parts of South Africa, it’s common to keep graveyards within the family compound.

Retired anthropologist and historian Mda Mda said the service would not be elevated to the status of a royal funeral, despite his family connections to Thembu royalty. “He was not a king, his father was not a king as some people would like to believe, he comes from a lower house of the Thembu,” he said.

In July this year’s Mandela’s eldest daughter, Makaziwe, told the national broadcaster SABC that the family did not want to see their father’s grave turned into shrine for pilgrims. As a result it will not be made accessible to the public.

President Jacob Zuma will unveil a nine-metre high bronze statue of former president Nelson Mandela at the Union Buildings, in Pretoria, next week, the government said on Thursday. “The unveiling of the statue on December 16 is intended as acknowledgement of the contribution of the first president of a democratic South Africa, a symbol of national reconciliation and unity,” the arts and culture department said in a statement. “Hopefully, it will become a site of pilgrimage for domestic and international visitors.”

The area around where the statue would be erected at the Union Buildings was cordoned-off on Thursday afternoon, with a fence covered in blue plastic. Workers could be seen welding the feet of the statue as it lay face down on the ground, on the lawn in front of the building. A small construction crane was inside the cordoned-off area. A worker said the statue was expected to be erected on Friday.

Monday, which is the Day of Reconciliation, also marks the commemoration of the centenary of the Union Buildings.

“The installation of Tata Madiba’s statue at the Union Buildings is part of the department’s… ongoing work to develop new symbols and monuments that reflect our collective aspirations as South Africans and the new values we stand for,” the department said.

Mandela died at his home in Houghton, Johannesburg, last Thursday, at the age of 95. An official memorial service was held at FNB stadium, in Soweto, on Tuesday. His body has been lying in state at the Union Buildings since Wednesday. He will be buried at Qunu, in the Eastern Cape, on Sunday. Zuma said at the memorial service on Tuesday that the amphitheatre at the Union Buildings would be renamed the Nelson Mandela Amphitheatre in his honour. – SAPA