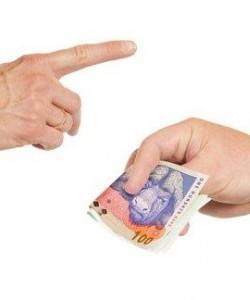 Where does relationship management start and corruption begin? I applied my mind to the subject in a recent column and found the conclusions a lot more complex than first appears. Alexx Zarr shares his lunch date with a customer. After working through the experience, he draws some rational conclusions on the subject of corruption.  We could do with a South African Anna Hazare. And more Alexx Zarrs prodding us to think more deeply about a cancer that is tough to eliminate.  – AH

I took a man to lunch today.  It was a pretty fine lunch too; four star food, five star prices.  Nevertheless, one needs to pay a premium to be seen in the right places too, I am told.  This person is not really a friend, but someone to befriend, in a business way.  My lunch date was a senior person who represents a business I do work for; a person who has material decision-making power regarding which consultants are contracted, or not.  I took him to lunch, to thank him for the business of 2013, and sow the seeds for 2014.  I want him to like me, to feel connected with me, to remember my appreciation and the suggestion of future assignments.  I hope he prefers my lunch to my competitors’ lunches, at least.

Let’s call my date, Mr Rightly – Rolf Rightly, for the sake of the discussion.  During the course of lunch Rolf tells me how much he enjoyed the recent golf tournament held in a bush paradise.  One of Mr Kerzner’s monuments to ‘Bantustan Civilisation’.  Rolf reckons the banks are still flush with money as they even now take a gazillion clients on this junket.  He is sure he gets more back in freebees than he pays in bank fees.  “The ones who do not get invited cross-subsidise us,” Rolf explained, with glee.

I felt better that I was a small-scale incentivisor compared to the jamboree in the bush, or the annual client conferences (wink-wink) that descend on some exotic location.  “Thanks Mr Rightly, for all your business.  Here is a business class trip to a technology conference in Disney Land.”

Am I corrupt?  What is corruption?

It feels to me that there is a malignant cancer in our midst; that it has invaded every cell of our bodies.  It is so widespread that we may not know what normal is any longer.  It has been with us for so long it is now our culture.  The lines are so blurred that we see only the rampaging exceptions, perhaps out of jealousy.  The few who are trying to hold the disease at bay are considered lunatics (“Get with it, or you’re going to miss the train!”).

The greatest sin is to be caught with the fingers in the veritable cookie jar.  That is all.  But, even if caught, another layer of corruption will spin one out of harm’s way, and into the malls or onto the golf course.

As a society South Africa is far down the continuum of responding to the bad news of corruption (refer list of phases below).  As individuals we are all spread over these phases.  Some of us are at the first stage.  The shock of Nkandla got some of these out of their stupor.  Some of us are in denial, others are damn angry and many shrug shoulders and say, c’est la vie

* Bargaining stage: Seeking in vain for a way out

But, am I justified in feeling that we are being swamped by corruption, from the petty stuff to the Nkandlagate variety?  On what basis do we measure the level of corruption?  Before we do that, let me try to describe what it is.

Definitions can be quite restrictive, but we need to start somewhere.  Here are two offerings:

Corruption is the abuse of public resources to enrich or give unfair advantage to individuals, their family or their friends.  Corruption Watch is concerned with any such abuse of power or position by anyone at any level of government or in business.

Corruption is a broad term covering a wide range of misuse of entrusted funds and power for privat(e) gain: Theft, fraud, nepotism, abuse of power etc.  A corrupt act is often – but not necessarily – illegal.  In handling corruption you will often face gra(e)y zones and dilemmas.


I like the quirky second one.  It highlights the ambiguity of the concept.  It is what causes me to wonder whether I have sinned or not, with Mr Rightly.  Where is the line between legitimate business and corruption?  Is it the same for all places and times?  And, why is corruption bad?  On the latter point; it seems to be part of every society, it is merely levels and depth that are different.  For example, “The Corruption Perceptions Index 2013 demonstrates that all countries still face the threat of corruption….” So, if it is a societal dynamic, should we not just let it go?

Let us assume for the exercise, that in a perfect world all business and service relationships need to be based on the principle of efficiency.  Such relationships include both private and public sectors.  In the latter, we pay taxes for the services we have contracted with government to provide.  In economic terms, one would describe the condition as akin to perfect market conditions.  For example, Mr Rightly should contract the consultant that can provide the most suitable service at the best associated price.  The only trade-off should be price and quality.  It should not matter to Mr Rightly even if I were his twin brother, or paid him a share of my fees, or we are both Scotsmen and studied at Oxford.

Like the winner of a footrace, the winner of the contract should be the one who wins an objective and transparent bid.  Anything else is corrupt.  Both parties are corrupted.  Multiple parties suffer disadvantage; the business pays more for less, shareholders lose, other contractors who have played according to the book are undermined, and there is general deadweight loss.  (Deadweight loss can be stated as the loss of total welfare or the social surplus due to reasons like taxes or subsidies, price ceilings or floors, externalities and monopoly pricing.  It is the excess burden created due to loss of benefit to the participants in trade which are individuals as consumers, producers or the government.)

When corruption happens on a grand scale, not at the margins, but as a culture, the deadweight loss is so great that an entire economy can succumb to it.

As a parting shot allow me to provide an illustrative list of what I think are corrupt practices parameters:

£  Giving or taking any personal (or institutional) benefit that may influence contracting parties or their agents to conclude a contract that is not transparent, objective or based on clear quality-performance parameters and price.  And if it were open would clearly be questioned on the basis of efficiency;

£  Providing or accepting any form of personal benefit when representing a third party, whether business, government or other entity;

£  Providing or accepting any form of personal benefit when executing ones responsibility or avoiding sanction;

£  Constructing, implementing, administrating and participating in any system that inherently creates deadweight loss; and

£  Establishing any situation that equates to an unnecessary monopoly condition in order to extract value disproportionate to contribution.

If it is my intention or by accident that I influence Mr Rightly to contract with me, not because of my services and price, but what I can do for him, it is a corrupt act.  While I am sure many folk will disagree with my conclusion, and I may have drawn the line in the wrong place, but without doubt, the big issues arise when we allow the little ones to grow.

There is a saying, perfection is the result of doing many little things well.  If I twist this adage to the current topic, it reads; a culture of corruption results when we participate in many little forms of corruption, and think it is OK.

* Alexx lives in and works from Centurion.  He has degrees in economics, politics and strategic studies.  In the recent past he has been managing director of a mutual fund company, a pseudo banker managing wealth and transactional products and currently runs a specialist research and consulting entity.  Before that he did a stint at National Treasury and at a Constitutional entity, managing its research division. He has travelled extensively, studied offshore and done a stint of work for the IMF.  More than most things he loves to mountain bike, let his dogs walk him and write – just write.