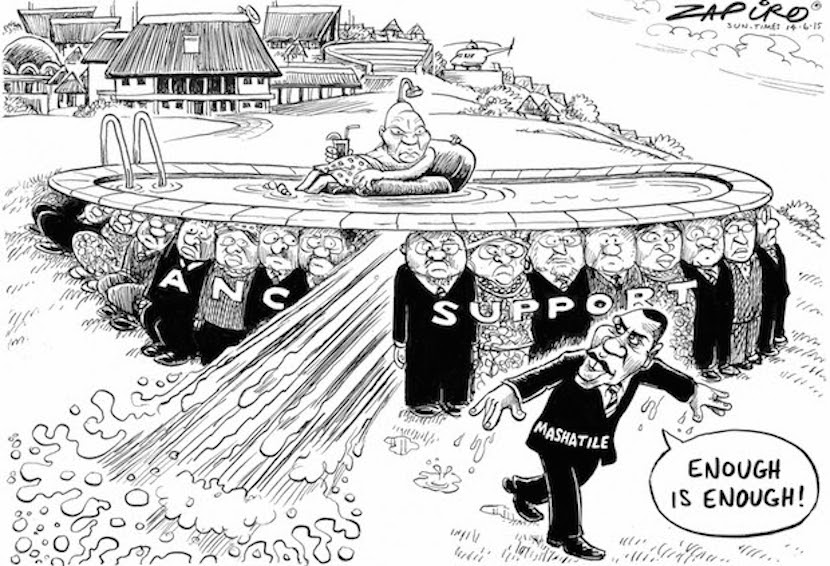 He created a stir. The highest profiled ANC member, who may have caused a leak in President Jacob Zuma’s firepool, to distance himself from police minister Nathi Nhleko’s report on Nkandla. Paul Mashatile, the chair of the ANC in Gauteng, is now targeting the private sector. He sees the private sector’s institutional investors ideally placed to accelerate much needed economic transformation. This is a worrying picture considering private sector expansion slowed to a crawl in May, according to the HSBC purchasing manager’s index, its lowest reading since February. But the reasons for this, primarily power supply shortages and weak export demand. So despite Mashatile calling for private sector involvement, because the government can’t be left alone, there is a fine line between working together and working against one another to fulfill Nelson Mandela’s legacy, 21 years into the democratic era. – Stuart Lowman

Rhetoric will not take SA forward. Instead, we require pragmatic interventions specifically aimed at deracialising our economy and brightening its prospects for sustainable growth. These objectives cannot be achieved unless the triple challenges of unemployment, inequality and poverty are forcefully addressed to promote our society’s stability.

For optimal success, neither policy intervention nor implementation can be left to government alone. Active participation and partnership with the private sector are essential. Key stakeholders are institutional investors which represent the savings, and hence the long-term economic interests, of South Africans as a whole.

These institutions, including pension funds in which millions of South Africans put their money and trust, are ideally positioned to help accelerate the economic transformation urgently needed. As the largest shareholders in corporate SA, they are also the mobilisers and fiduciaries of our people’s savings. Their interests and the national interest are inseparable.

What’s required of them? At one level, it’s to be shareholder activists; to use their voting clout for more representative boardroom demographics, for a demonstrable say on executives’ and workers’ pay, and for guidance on employee practices that can open opportunities for inclusion of the lesser-privileged into the mainstream economy. In short, it’s to be the guardians of corporate social responsibility where lip service and short-termism have no role.

At another level, it’s to accelerate service delivery. There must be an environment in which institutions are allowed, indeed encouraged, to invest directly in economic and social infrastructure. Beneficial consequences will obviously include a significant spur to overall growth for the prosperity of companies shared with their investors, long-term investment returns that are stable and competitive, and a sustainable trajectory of job creation.

In essence, institutional investors can and should play a critical role in the advancement of economic transformation. We must get away from the apartheid legacies that, even 21 years after democracy, continue to keep the majority of black people restricted to the periphery of mainstream economic participation.

We should not blame apartheid for all our challenges of today. We too have made post-1994 policy errors. The lack of investment in energy infrastructure, to deal with growing demand from the economy, is an obvious example.

Yet we have emerged from a deeply divided past into a vibrant democratic state and we have made progress. Our gdp has more than doubled in the past 20 years; many more people have access to basic services; households with electricity connections have increased to 85%; in 2002 there were 56% of households with access to piped water, whereas today the figure is 91%.

At the same time, however, SA has become one of the world’s most unequal societies. The rich (in a minority) are getting richer and the poor (in an overwhelming majority) are getting poorer. We cannot allow the continuation of a trend that is morally wrong and potentially explosive.

One route to reversal can be driven by workers and employees themselves. Their capital, through the pension funds where they’re invested, can powerfully move SA towards a more just and equitable future. Shareholders, the providers of capital, own the means by which profits are produced.

The Association for Savings & Investment SA (ASISA) puts overall SA savings (voluntary and compulsory) at some R7 trillion. About R4 trillion is in retirement funds, the biggest single category of shareholders in the JSE’s top 100 companies.

Although the issue of pension-fund capital being used to drive transformation might be perceived by some as inconsistent with trustees’ fiduciary responsibility, I believe otherwise. In my view, trustees are obliged to concern themselves with the long-term sustainability of their investments. Such concern is linked directly to our political objectives of reduced unemployment, poverty and inequality as part and parcel of better lives for all.

None of this is unprecedented, from the Sullivan Code in the 1970s – sparking a shareholder activism campaign that led to the disinvestment of multinationals from SA in the 1980s – to the UN-sponsored Principles for Responsible Investment launched in 2006, leading to adoption of the Code for Responsible Investment in SA and reflected in pension-fund governance requirements introduced by the Financial Services Board.

It might well be asked how much better off the world would have been were shareholders more alert to goings-on in the global banks prior to the 2008 financial crisis or, closer to home, if African Bank were reined in before it was too late.

The ANC in Gauteng has called for radical economic transformation anchored on shareholder activism through pension funds. We know what we’re up against. Most debates on transformation of our economy – from nationalisation of key sectors to representation on company boards – the voice that ought to be most influential is often absent. This is the voice of the biggest shareholders, the fiduciaries of people’s capital.

As a provincial body, our policy stands. It will be progressed in proposals to ANC national bodies, but not before it has been subjected to stakeholder engagement. Appropriate forums are being set up and important conversations are about to begin.

We shall be attentive listeners, appreciative of contributions intended to enhance the inclusiveness of our democracy.

* @Paul Mashatile is the chairman for the ANC in Gauteng. The first public consultation will be held in the JSE Auditorium on 21 July.