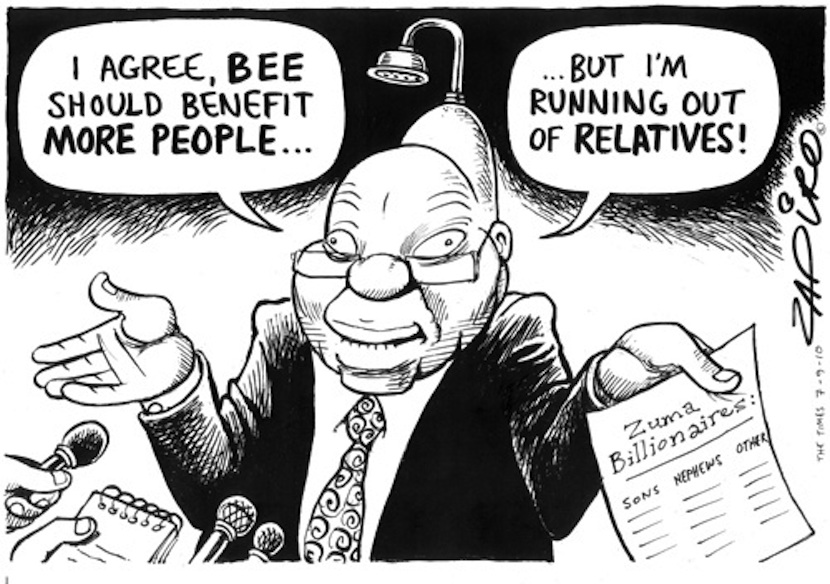 A comprehensive audit of black economic empowerment (BEE) ownership deals since 2001, recently compiled by Intellidex, a consultancy, shows that R317bn, free of debt, has been transferred to black South Africans by the top 100 companies listed on the Johannesburg Stock Exchange (JSE).

The overall value of these deals is, of course, very much higher – and was estimated at some R600bn in 2013. Yet, despite the high costs of what has already been done, the pressure on business for ever more BEE deals is relentless.

The revised BEE generic codes of good practice, which took effect on 1st May 2015, make ownership a “priority” element for companies both large and small. For the first time, qualifying small enterprises or QSEs (those with annual turnover of between R10m and R50m) must also implement such deals, or see their “levels of BEE contribution” reduced by one level.

In the past, QSEs could choose four out of seven BEE elements to implement, which meant they could earn significant points without complying with the ownership rules. Under the revised codes, this flexibility has been removed.

Moreover, the aim of the new codes is not to encourage “broad-based” deals with employees or community trusts, which are to earn only 3 points out of 25. Instead, the emphasis is on narrow deals with the “100 black industrialists” the Government is trying to promote.

In addition, President Jacob Zuma claimed earlier this year that black South Africans own only 3% of listed shares on the JSE. According to the Presidency, only “direct” black ownership counts, while “indirect” black ownership – through the pension funds and other institutions that own the bulk of listed shares – is irrelevant. This means, the Presidency adds, that 22% of the JSE, with a value of some R2.6 trillion, still has to be transferred.

However, this perspective overlooks both the content of the codes and a series of research reports commissioned by the JSE. The latest JSE research (published in February 2015) puts black ownership of the JSE at 23%: 10% direct and 13% indirect.

Moreover, writes BEE expert Jenny Cargill, since black South Africans hold significant stakes in pension funds and the like, the aim should be to “measure black shareholder wealth in its entirety – not just the shareholding directly held by BEE entities”.

In addition, some 40% of JSE shares are owned by foreign investors and are not available for BEE redistribution. If this 40% is left out of account, as logic suggests, then black-owned shares make up 38% of the shares available and the 25% target has been met.

Far from acknowledging this, the Government is now using the revised codes to ratchet up the level of BEE ownership required from 25% to 51%. The pressure here comes not from the ownership element itself, but rather from the new element of “enterprise and supplier development” (ESD), which counts 40 points on the new scorecard.

Then there is the “supplier and enterprise development” sub-element of ESD, for which 15 points can be earned for assisting BEE firms within and outside company supply chains. Under the revised codes, all contributions of this kind must now go to firms with 51% black ownership. Larger enterprises, those with annual turnover above R50m, are expected to contribute 3% of net profit after tax (NPAT) to such firms, while QSEs must put in 2% of NPAT.

No points are earned for contributions to firms with less than 51% black ownership. For larger enterprises, this is also a “priority” element – so failure to achieve 40% of the specified target will result in their levels of BEE contribution being reduced by one level.

Already, the new rules are putting pressure on companies that sell goods and services to larger enterprises to transfer 51% of their equity or assets to black people if they want to retain supply contracts often vital to their viability.

At the same time, Eskom wants the mining companies that supply coal to it to have 51% BEE ownership, even though the mining charter requires only 26%. So coal mining companies wanting to do business with the parastatal at a time of weak export markets are also under pressure to do additional BEE deals to reach this level of black ownership.

In 2013 wealthy Nigerian businessman Aliko Dangote warned against BEE ownership requirements, saying Nigeria used to have similar rules but had shed them because they deterred foreign direct investment (FDI).

In addition, where BEE ownership requirements rise to 51%, this could be seen as indirect expropriation and is likely to become a still more potent barrier to FDI.

However, instead of heeding Dangote’s warning, the ruling party is steadily shifting the goalposts on BEE ownership rules. Its underlying aim is not to provide redress for past injustice but rather to “eliminate” existing property relations in this more “radical” phase of the national democratic revolution (NDR).

It is time to call a halt to BEE, which needs to be replaced by a new focus on “economic empowerment for the disadvantaged” or “EED”. Instead of breaking down property rights in pursuit of a socialist nirvana, EED would emphasise all the right “Es”: from economic growth and excellent education to employment and entrepreneurship.

* Anthea Jeffery, Head of Policy Research at the Institute of Race Relations. Jeffery is also the author of BEE: Helping or Hurting?