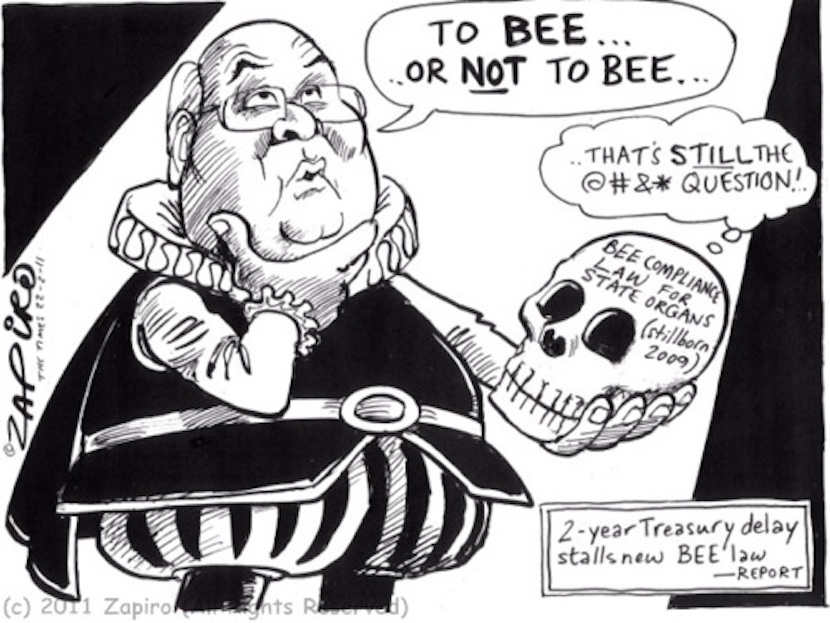 Under draft regulations published last week, the National Treasury is proposing that government tenders up to R10m will in future be evaluated only 50% on price, while the preferential weighting for black economic empowerment (BEE) will also count 50%. This increased BEE weighting will encourage still more inflated prices from BEE “tenderpreneurs” – and yet more firmly subordinate the interests of the poor to the interests of a small elite.

The chief financial officer of the Western Cape provincial administration (at the request of provincial premier Helen Zille) has provided an example of how the proposed rules would work. At present, he says, a BEE bidder could charge 20% more than another firm for a bar of soap and still get the contract. Under the new rules, that BEE bidder could charge 90% more and still win the tender. On this basis, there will, of course, be much less revenue left over for the State to buy the other goods and services on which the poor depend.

BEE price escalation in state tenders has long made for enormous wastefulness in public procurement. Pravin Gordhan, then our finance minister, lamented this in 2010 when he said that the Government was paying more for everything, from pencils to building materials, than a private business would: “R40 million for a school that should have cost R15m, R26 for a loaf of bread that should have cost R7.”

In 2012 Gwede Mantashe, secretary general of the African National Congress (ANC), voiced a similar concern, saying that BEE companies must “stop using the State as their cash cow by providing poor quality goods at inflated prices”. He also criticised officials for “prioritising the enrichment of BEE companies through public contracts at the expense of… quality services at affordable prices”.

Mantashe later warned that the State would be ill advised to continue putting preferential procurement before service delivery. Said the ANC secretary general: “This thing of having a bottle of water that you can get for R7 procured by the Government for R27 because you want to create a middle-class person who must have a business is not on. It must stop.”

The examples cited by Gordhan and Mantashe involve BEE weightings, in practice, of about four times market prices. Yet all these instances arose under the current procurement rules under which the BEE weightings are supposed to be very much smaller.

Under the Preferential Procurement Policy Framework Act of 2000, a 90:10 formula has long applied to tenders worth more than R1m, in which 90 points are allocated on price and 10 points on BEE status. In practice, this has meant that BEE contractors can charge 10% more than others and still be awarded a contract. Under the current rules, a 80:20 formula applies to contracts worth less than R1m, allowing BEE contractors to charge 20% more and still gain such tenders.

One of the factors contributing to BEE price escalation was explained in 2012 by an unnamed BEE contractor who told The Star that BEE businessmen seeking state contracts have little choice but to charge inflated prices to “recoup the costs of paying mandatory kickbacks” to corrupt officials and “regularly donating huge sums” to the ANC and its allies.

Those who failed to make the necessary payments either in cash or “in kind” – by giving sub-contracts to the relatives of public servants and politicians – would find themselves excluded from state contracts worth many millions of rands.

Though few other businessmen have admitted to making payments of this kind, the comment is consistent with what Gordhan and Mantashe have said. It also seems to provide insight into a wider pattern of corruption estimated to cost the State some R30bn a year.

If The Star’s informant is correct, the ANC and the SACP are also already benefiting handsomely from inflated BEE contracts. So too, of course, are a small group of BEE “tenderpreneurs”, some of whom have been pushing for years for the State’s procurement requirements to be ratcheted higher.

Overlooked in this BEE feeding frenzy are the poor who depend on the Government for a host of goods and services; the companies that are effectively barred from winning tenders at market-related prices; and the battered South African economy already limping along at annual growth rates of some 1.5% of GDP.

The draft regulations should immediately be rejected as contrary to the Constitution. Instead, however, they are likely to be adopted in the climate of lawlessness the ANC is busy fostering.

If this occurs, the looting of state resources for the benefit of the ANC/SACP alliance and a small circle of “tenderpreneurs” is likely to accelerate. With growth rates already so low, this will push South Africa ever closer to a fiscal cliff where available tax revenues cannot cover social grants and public service wages – let alone spending on infrastructure, HIV medicines, and other essentials.

*Anthea Jeffery is head of policy research at the Institute for Race Relations. Jeffery is also the author of BEE: Helping or Hurting?