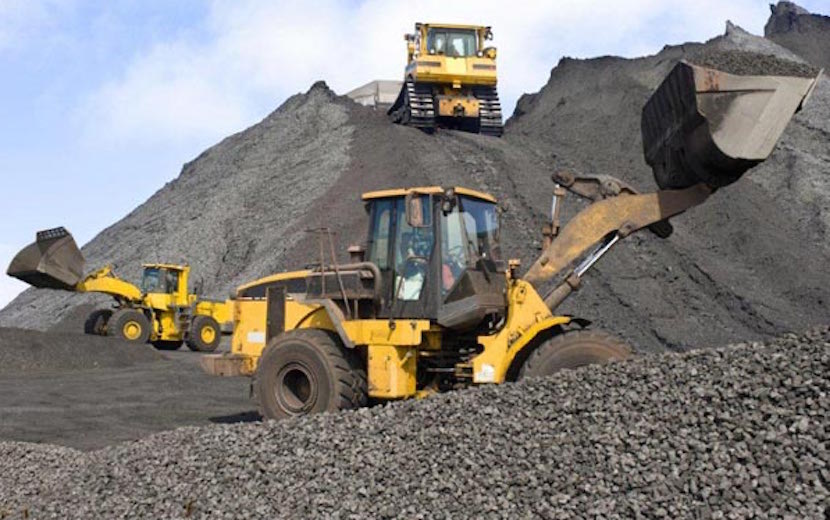 The commodity cycle rout has left none in its wake. The slump in overall stock prices highlight the investor damage, while the job losses are starting to pile up, showing the impact on the shop floor. Riaz Gardee looks at what the current climate means to BEE deals, in particular Exxaro. The miner’s value has declined almost 50% since last year, not helped by the unsuccessful Republic of Congo venture – a R6 billion write off. The current scheme is expected to unwind in 2016, with the miner needing to create a new scheme, one which Gardee says will hopefully have a public participation component, with pricing not helped with the current challenges in the sector. – Stuart Lowman

JSE-listed Exxaro is the largest black-owned mining company in South Africa producing 39 million tons of coal per annum. The recent precipitous drop in commodity prices coupled with a major unsuccessful foray into the Republic of Congo has resulted in a decline in market value of almost 50% in the last year.

The current market capitalisation is hovering around R23.5bn at a share price of R66.

Almost R6bn has been written-off in the income statement on the Mayoko project in the Congo. Many companies have suffered serious consequences of ill-timed and difficult-to-execute acquisitions. Not only does it impact directly on the bottom line but a disproportionate amount of management time is subsequently absorbed in trying to remedy poor acquisitions. Some notable examples have been between Tiger Brands and Dangote Flour, African Bank and Ellerines and Anglo American and Minas Rios.

Exxaro was formed as the result of an empowerment transaction unbundling assets of Kumba Resources in November 2006 to form a pre-eminent black-owned and controlled mining company. Kumba Resources itself was unbundled from initially government owned Iscor, now known as ArcelorMittal, in 2001. The two companies formed as a result were:

The following is in organogram of the shareholding highlighting the 52.09% BEE ownership: 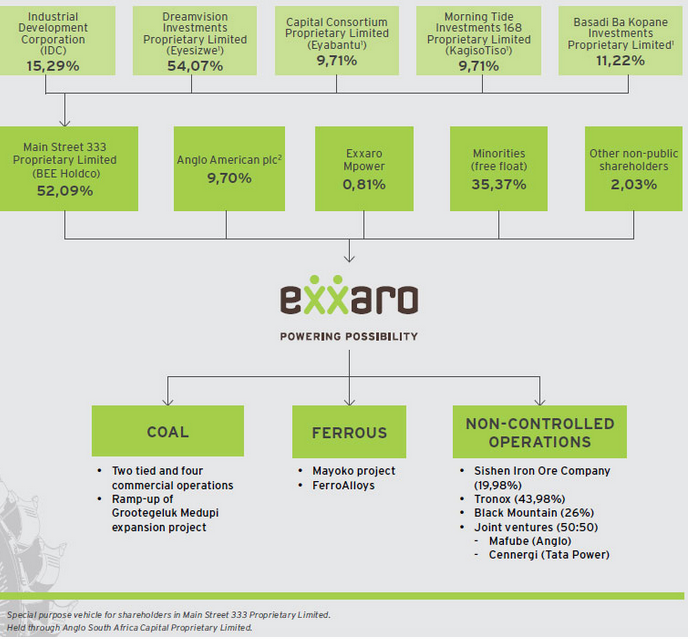 No broad-based public participation component was included in the transaction.

The major components of the value can be split between its carbon and non-controlled operations. The carbon operations generated headline earnings of R1.179bn (332 cents per share) for the 1st half of 2015 at a coal price of $56/ton and average exchange rate of R11.86:$1. Assuming a similar performance in the second half, not even factoring in the weaker exchange rate, the carbon division should generate close to R2.5bn. This also does not include any profitability from its recent acquisition of Total Coal South Africa, which may take time to incorporate, now giving it 11.7% ownership in Richard’s Bay Coal Terminal.

The non-controlled operations are mainly 19.98% in Sishen Iron Ore Company (SIOC) and 43.98% in US-listed titanium products and chemical company Tronox. Both the values of these investments have significantly declined in value from almost R50bn in 2013 to currently under R10bn. The earnings and dividends from these companies are expected to be significantly lower than prior years further adding to the woes of the company. Typically these amounts would be comparable to the capital expenditure spend but since they are much lower it is likely to negatively impact on future dividends.

Read also: Ruan Kemp: Exxaro – To hold or not to hold?

The company has also shown single-digit return on equity ratios which is a combination of low commodity prices and poor returns from non-controlled investments. Fortunately the company is not as highly geared as some of the other miners and has forecast a debt:equity ratio of 12% for December.

Approximately 50% of the current value of the company comprises the non-controlled investments with an implied value of R10.5bn for the existing operations. In essence the price reflects current commodity prices into the foreseeable future with improvement therefore hinging on a recovery of coal and iron ore prices. The recent coal strike will only add to the company’s woes.

Commodity cycles typically reflect these boom and bust cycles with super profits on one end of the spectrum resulting in over capacity and systemic shocks which then sometimes even depress pricing to below the cost of extracting these commodities on the other end. A case of yin and yang. The low-cost producers and those with low gearing are usually the ones who are able to ride out the storm with Exxaro targeting to be in the lowest half of the cost curve.

In November 2013 Main Street 333 (‘MS333’) raised a R3.8bn preference share facility with a consortium of banks to refinance the acquisition debt raised in 2006 on the initial acquisition of the controlling interest in Exxaro. In a July sens announcement the company said that it had loaned MS333 R400m to repay a portion of the debt to ensure compliance of the facility after the steep share price decline and the company wanted to ensure a continued black majority ownership ‘in the best interests of the company and its shareholders’. The announcement indicated R200m would be settled in the near-term after a sale of some shares. Even at current depressed prices the 52.09% BEE shareholding is worth R12bn and after the R3.8bn debt still over R8bn ‘in-the-money’.  However in order to retain its black-owned status Exxaro needs to retain a BEE shareholding of over 50% ruling out disposals to non-BEE participants.

BEE schemes with long-term lock-in mechanisms have shown the ability to create value via gearing as the growth of the company over this period has generally exceeded the debt finance rate.

The company has also announced that it would be unwinding the current BEE deal once it had reached the end of its 10-year term in 2016. It would then create a new BEE scheme, the details of which have not yet been revealed. Investors will be hoping that it includes a public participation component to ensure the widest impact in terms of broad-based empowerment. We will have to wait and see.

*Riaz Gardee is a chartered accountant who specialises in merges and acquisitions and corporate board advisory. He has authored numerous financial articles and columns across various publications.