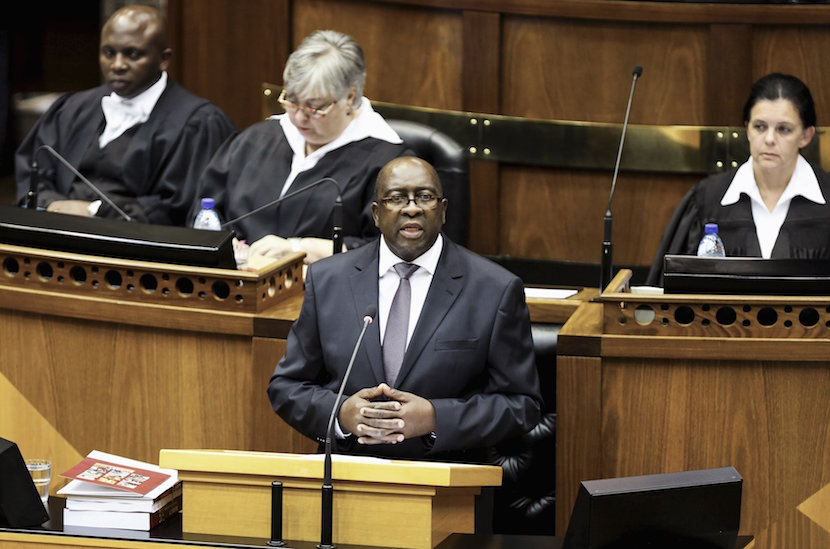 Investment Solutions economist Lesiba Mothata has his say on the sudden departure of Finance Minister Nhlanhla Nene. He says with Nene, so economic sanity followed. His fear is that the South African Reserve Bank is on high alert which may see an emergency meeting of the monetary policy committee to stop the runaway train called the Rand. He shuffles the readers memory with regards to the Russian move last year December, which saw the central bank raise interest rates by 6.5 percent. An interesting little read, unpacking the potential fallout of Nene seeing the door. – Stuart Lowman

Economic sanity had prevailed in SA until Finance Minister Nhlanhla Nene was removed from his post. Now, the country is on a slippery slope as the assault on the rand continues and investor confidence fades. The South African Reserve Bank (SARB) is on high alert and it would not be surprising if an emergency meeting of its monetary policy committee is convened and interest rates increased. As happened in Russia during December last year, when the central bank raised interest rates by 6.5 percentage points in one hit, the SARB might be forced to lift rates as runaway currency-induced inflation ensues.

This outcome has arrived in a situation where investors have already voted with their feet on SA assets as credit-rating downgrades by Fitch and outlook revisions by Standard and Poor’s precipitated the stampede. In the past three months, foreign investors have sold SA equities and bonds to the tune of R33 billion and R7 billion respectively, according to data from the Johannesburg Stock Exchange (JSE). While these figures are not as large as in previous episodes — during former Fed Chairman Ben Bernanke’s 2013 taper tantrum and the 2008 global financial crisis – they have set an uneasy tone for SA as it enters 2016.

The Institute of International Finance has warned that foreign capital flows into emerging-market (EM) economies could fall substantially from the heady inflows experienced in the past two years when over US$1 trillion of private capital found its way into EM assets. Judging by recent history, SA has become more correlated with movements of capital in and out of the broader EMs, with heightened sensitivity and interwoven feedback loops seen. The interaction between capital outflows and the rand has also been re-established. 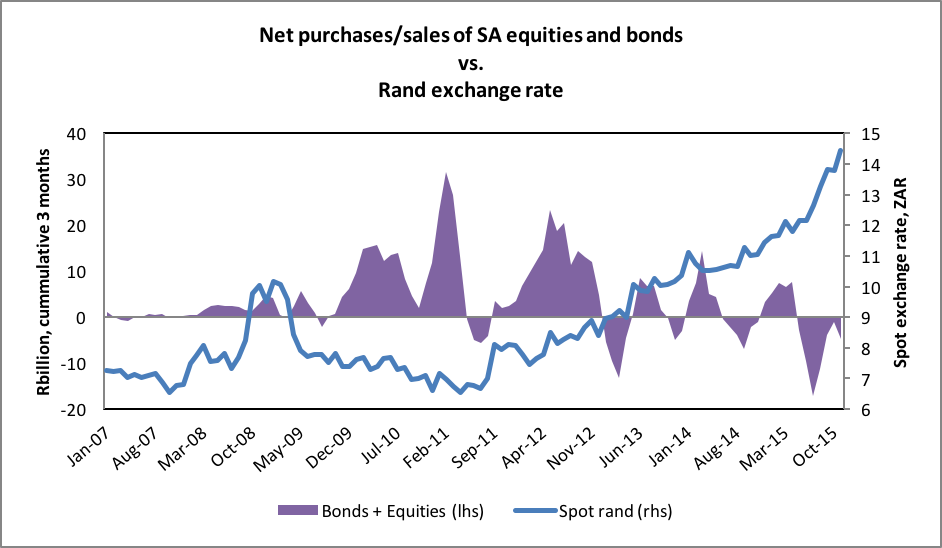 The graph above shows broad inflows into SA equities and bonds since the fourth quarter of 2007 — the positive effects of quantitative easing (QE). The inclusion of SA in the Citi World Global Bond Index (Citi WGBI) in 2012 resulted in additional bond inflows (R87 billion). Since the May 2013 taper tantrum, foreign inflows have been choppy, erratic and volatile. There was some benefit to the rand in the initial stages of QE, but that lost steam as a combination of domestic issues, EM concerns and commodity price declines took centre stage in the rand-exchange market. Lately, the rand seems more sensitive to capital outflows. The correlation between outflows and rand depreciation is more pronounced.

The large current account deficit (now 4.1% of GDP), which has not responded to the sustained rand depreciation, combined with the deteriorating fiscal outlook, has left SA vulnerable. While the base-case scenario is not that of an Armageddon, current conditions leave one wondering whether the seeds of a negative economic outcome have not been sown for a full expression in the ensuing year. Growth will remain weak, interest rates will likely rise and taxes will likely increase.

At the recent G20 meeting in Turkey, although overshadowed by the terrorist attacks in France, the countries committed to implementing corporate tax overhauls aimed at clamping down on tax avoidance by companies. It is expected that worldwide, through these tax measures, governments will earn back $100 billion to $240 billion in lost revenue each year. Given the need to boost government revenue, SA is likely to announce some form of a corporate tax package in the February 2016 budget.

Investors have become concerned about the rapid depreciation of the rand, which is likely to continue to lose ground through 2016. The demand for stocks on the JSE that earn foreign income with costs denominated in offshore currency — the rand-hedge stocks — has surged. Admittedly, the quality and texture of the JSE has changed materially. In the early 2000s, it was mainly dominated by resource stocks, with only a handful defined as pure rand hedges. The current basket of corporations earning a large part of their revenue overseas is diverse, and includes counters in various economic sectors, such as property.

Resource shares have been unloved on the JSE, and the assault on them has been jaw-dropping, particularly in recent months. In its 13th five-year plan, China has laid out its intention to bolster investment in the New Silk Road initiative, which could ignite new demand for commodities. China has committed to spending nearly $1 trillion to bind the surrounding countries in the region more closely through the construction of pipelines, roads, railways and ports. Two initiatives have been set up as a result: the US$50 billion Asian Infrastructure Investment Bank and the US$40 billion Silk Road Fund. If implemented, this could occasion a cyclical rally in resource shares over the medium term.

Investors need to be on the look-out for a potential risk event for SA. While it would take a severely adverse economic situation to push SA into non-investment grade — and the country does have some resilience given its low level of external debt – the danger of downgrades to the bottom end of investment-grade credit quality remains. In fact, the recent outcome of rapid rand depreciation and economic mismanagement emanating from the political front could result in Moody’s downgrading SA’s sovereign credit by two notches, and other agencies following suit. If the capital outflows persist, and the related feedback loop between rand weakness and inflation becomes entrenched, the SARB is likely to call an unscheduled meeting and increase borrowing costs.