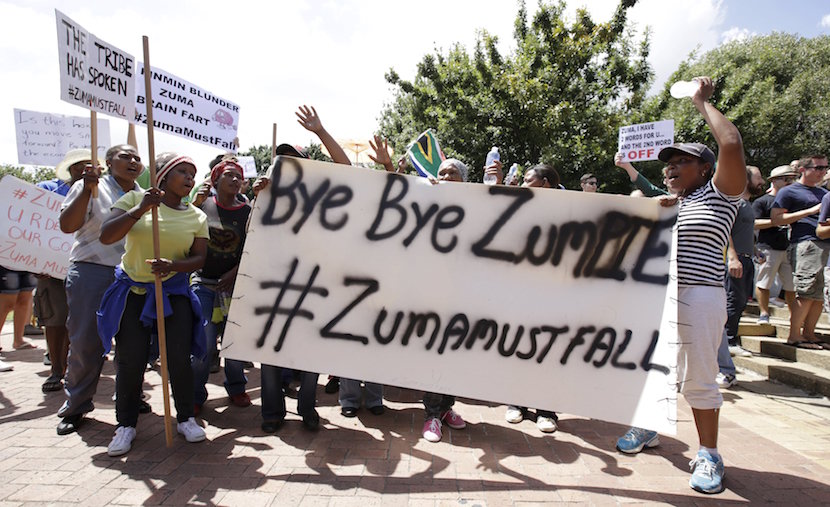 One could be forgiven if you’d forgotten it was still January, given what’s already taken place in South Africa, and that’s without a mention of global concerns. And while many were happy to see the back of 2015, 2016 hasn’t offered the relief many sought. The Institute for Security Studies is an African organisation which aims to enhance human security on the continent. Judith February, a consultant in the Governance Crime and Justice Division looks at racism and the thorny issue of freedom of expression. It’s an interesting read around race, hashtag revolutions and a drought that’s expected to leave 14 million hungry in Southern Africa. If  you thought 2015 was tough, don’t expect 2016 to be any easier. This article was first published in ISS today. – Stuart Lowman

South Africans were happy to see the back of 2015, having had just about enough of fractious politics and on-again-off-again finance ministers. Yet in the midst of the heat wave and New Year’s festivities, we had Penny Sparrow – a hitherto unknown real estate agent from Cape Town – spewing racism. But, enough has been said about Sparrow and her specific form of bigotry.

She is not alone and represents the demons that remain close to the surface in South African society; which we have still not been able to purge more than 20 years after the end of apartheid. That the Sparrows of the world surprise us is probably the greater indicator of our living as though ‘the other’ does not exist, even amid ever-deepening levels of inequality.

How can we balance respect for one another and the outlawing of racist and hate speech, while still protecting freedom of expression? It seems very tricky in an environment where the state has already shown very worrying tendencies to shut down debate and the free flow of information.

Last week, a billboard with the wording ‘Zuma must fall’ appeared in Long Street, Cape Town. The immediate cry from the ruling African National Congress (ANC) was that it was ‘blatantly racist’ against President Jacob Zuma. ANC members subsequently tore down the billboard. It is hard to see how the words ‘Zuma must fall’ can be construed as racist and not the expression of a political viewpoint.

The ANC argued that Zuma was elected by the majority, and that any argument that he should leave office is therefore anti-democratic and racist. That, of course, is disingenuous. Anyone who attended the ANC’s 2007 Polokwane conference saw the visual hand signals, so often used in football, calling for then president Thabo Mbeki to go. These signals were repeated during the conference. Was that racist?

It is this sort of knee-jerk invocation of racism that could have a dampening effect on freedom of expression, particularly around election time. That someone has been democratically elected does not and should not insulate him or her from criticism. A democracy is a cacophony of noise and differing ideas. We should all be bold enough to embrace those. Is the ANC so insecure in power that it cannot brook criticism of its president? Besides, the simple democratic principle is that Zuma governs on behalf of all citizens – not only those who elected him. It’s a curious thing, since the ANC leadership itself is divided over Zuma’s presidency and the damage he has caused to democratic institutions, and our economy specifically, over the past year.

Given this sort of polarised debate, how will we find the balance between the right to freedom of expression and some common ground on what actually constitutes racist or hate speech? Government might legislate, but legislation is a limited response to what is a broader challenge in an unequal society.

Adam Habib, Vice Chancellor at the University of the Witwatersrand, pleaded for thoughtfulness too this week as students continued their #feesmustfall campaign across some campuses. It was in essence a plea for balance in the way we debate and speak to each other.

Expression has come in often-destructive forms, with students barricading campuses and then the inevitable heavy-handed police action. Government’s response, yet again, seemed mixed.

When all else fails, a commission of inquiry into higher education fees must surely be the solution? It will take nearly a year for that work to be completed. What will happen in the meantime? Can we be thoughtful about our resources and demands for free higher education? Can we all listen one to the other, and find that elusive compromise? That remains an open question in a world of absolute demands and student walkouts.

We cannot look to the ANC to lead in the battle for ideas or for balance for that matter. Its 104th birthday celebrations seemed to be lost in the news cycle apart from Marius Fransman’s alleged dalliances. Yet, we did see the ANC trawl out an array of traditional leaders, presumably to shore up support ahead of the 2016 local government elections.

In the real world, Finance Minister Pravin Gordhan is trying to manfully save South African Airways and stave off a recession. And while we are witnessing our superficially stitched societal compromise come undone in so many ways, South Africa is facing one of its worst droughts in decades. We seem mostly to be blissfully unaware of precisely what this will mean for food prices.

The drought is having a devastating effect on farms and small towns across the country. In some areas, children are drinking sewerage water out of sheer desperation while Free State farmers pray for rain. In part, the drought is a result of not taking proper care of infrastructure, not building sufficient dams and a rather slow response to the challenges farmers are facing. Over-grazing and other poor farming practices compound these factors.

What this drought is doing to small towns and farmers, in particular black, small-scale farmers, is nothing short of catastrophic. Those that were profitable before are now in dire straits. Gordhan has said that the drought is an ‘absolute priority’ for government, but is this too little too late – and do we have the money to actually support embattled farmers? Many municipalities have simply been sleeping through the crisis, hoping it will resolve itself.

One would have imagined that Zuma would prioritise this issue during his most recent Parliamentary question time; yet his responses were predictably routine. Farmers across the country seem to be doing their own rescue, and some companies and citizens have assisted by transporting resources and donating money for feed and water. The water crisis makes the electricity crisis seem bearable and even less urgent. Living off the grid and finding alternative energy sources can be explored, but when the taps run dry, pretty much everything stops.

The drought has given rise to some extraordinary acts of generosity between farmers, local communities and those who are simply too poor to buy water. However, it’s been a chastening way to start the year, and if we start importing maize, the effects on the poor will be most severe.

And so, amidst the hashtag revolutions, it’s also easy to forget the inequality and deep suffering in the very heart of the country; where cattle feed and crops grow and where farmers – black and white alike – pray for rain. It is where life is both simple and complex at the same time. In so many ways, one can intuit that 2016 is going to be a very dry season; and what we do with the odd patches of rain will be crucial.