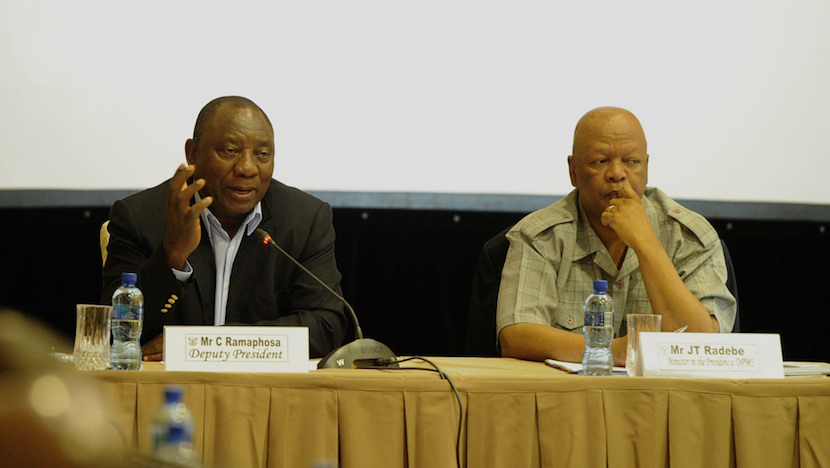 Alec Hogg asked: How do we get Cyril, Jeff to grow a pair?

The context was that many in London think SA is doomed. They see a Mugabe-like President supported by a system that focuses enormous power on his person.

Hogg said, though, that there are still some smart, competent people around Zuma but they need cojones. So does big business.

But there is a solution. Testicles grown in labs – Page 7 was the tantalising sub-heading on the front page of The Times (11 January 2016).

The US military is funding research into “lab-grown” testicles for soldiers whose battle injuries leave them unable to conceive children. This astonishing scientific discovery has wider applications than the US military ever imagined.

South African business urgently needs testicles. The parlous state of the rand may hamper their import, however.

Calls are increasingly being made for business to become much more politically active.

Business’s apolitical stance has long been a source of frustration for civil society. This reticence appears to be based on a combination of naivety, ignorance and fear. Consequently, business has failed to do what is in business’s (and the country’s) best interests.

Business naturally serves its best interests, until politics interferes. Then long term growth becomes a grasp for the short term, because government policy and attitudes make everything uncertain.

One of the great illusions in South African politics is that power resides in Government, Business and Labour. Labour, and specifically Cosatu, only has as much political power as the ANC allows it. Unions can assist or hinder economic development but they do not start businesses, or innovate, or create jobs. Unions exist to serve the employed in existing business.

Zuma’s sacking of Finance Minister Nhlanhla Nene in December 2015 saw an upsurge in business criticism of the government, but hardly howls of outrage.

Binedell, a founding director of GIBS, said that business is always a bit conservative, there’s some vested interest, there’s a conservatism and a tentativeness, but “I do think people will speak out a bit now. This has really shaken a lot of the captains of industry”. (Tentative indeed!)

But Binedell continued that business has got to start thinking differently. There is a lot of business-government dialogue that takes place behind doors, which is relevant and appropriate but it’s time for a more open agenda now. The stakes are much higher now.

In Business needs to speak straight and loud (Business Day, 17 December 2016) Michael Spicer and Antony Ball raised the issue of business courage in the aftermath of ‘Nenegate’.

They said that in a more developed democracy, removing an able, wise and respected finance minister; a deluge of negative economic news; and a ratings agency downgrade and lowering outlook on the country’s debt, would have been received with more surprise than an April Fools’ Day joke.

In their opinion the response of big business was lame. Business Leadership SA had said:

“in this context, the replacement of an effective and trusted finance minister just 18 months into his term of office has raised doubts about our ability to maintain prudent macroeconomic policies.”

This after reminding us of how important and powerful they are (… employ(s) more than a million people, contributes more than 80% of corporate taxes…).

The authors asked what business was doing to make government more accountable for its economic actions, which directly affect business’s ability to do business and contribute towards the upliftment of South African society in the way it should.

Business wasn’t going to earn the respect of government nor yield the results it sought. In their experience there is barely a business leader who has not lost confidence in Zuma, even before he sacked Nene.

Nene bravely fought for fiscal prudence, respect for markets and respect for corporate SA — all critically importance to business, but failed to support him when he was knifed.

Corporate SA has been unable to change the perception of being untransformed, connected to the old SA and unpatriotic. Much of this unfair, but the response to the latest crisis plays directly into this narrative.

“When the heroes of the day are acknowledged, we will find that the major beneficiary of this outcome was missing in action. How convenient. How very sad.” (Not so tentative!)

Nene was fired on the night of Wednesday, 9 December 2015. By five days later the cost to the country had been estimated at more than R200 billion.

Reasons business often give for its relative silence include not wanting to offend the government (ANC) so communication must be behind closed doors; business is not in the business of politics; business doesn’t want to be victimised by government.

Business just takes the snide accusations of being “white monopoly capitalists” without challenging the veracity of the insult or demanding to know what is actually meant by it.

This pusillanimity has been apparent a few times, when a lone CEO or company has criticised government and the rest of the corporate sector has failed to support them. Bullies are not neutralised if they are appeased.

A recent interview on Radio 702 with Whitey Basson, CEO of Shoprite/Checkers, left one in no doubt that Basson did not become one of the highest earning CEOs in South Africa by being a shrinking violet. But in the course of the interview the violet shrank.

When asked for his views on the current political scene, he demurred and said he doesn’t discuss politics.

The problem for Mr. Basson is that everything is politics. We are suffering the worst drought in 30 years. We have to import maize. Mealie meal is an important foodstuff for many of Basson’s customers. The collapse in the rand because of Zuma’s decision, therefore, is directly and negatively going to affect Shoprite/Checkers’ profits.

Business must assert itself. This doesn’t mean attacking government constantly; only when appropriate. Co-operation is often necessary and desirable. But if business thought that pandering to government is always in its best interests, Nenegate should have been the final nail in that coffin.

Promoting business’s interests, serves the interests of employees, shareholders and the unemployed. What is bad for business is usually bad for the citizenry. But if business can’t stand up for us, it must at least stand up for itself.