Return on assets managed is a phenomenon Steve Hanke, an economics professor at Johns Hopkins University, and Ryan Guttridge, a fellow there, named the “Amazon Puzzle.” They say this is the reason Amazon outperforms Google. And the key is hidden in asset turns, or how effective companies are at getting revenue out of their investments. While asset turnover is defined as sales divided by total assets, where a higher number is better. The same concept is used by Ted Black in comparing Apple against the likes of Microsoft. Black looks at how Steve Jobs grew Apple from a $2.5 billion company when he returned to the $750 billion it is today. A fortress circled by a moat of high asset turn, high ROS and high cash ROAM, with no debt and lots of cash. – Stuart Lowman

Steve Jobs became Apple’s CEO again in September 1997. The firm was close to bankruptcy. At the time, Bill Gates said, “What I can’t figure out is why he’s even trying…he knows he can’t win.” Microsoft’s market cap was $250 billion. GE’s was $240 billion. Apple’s was $2.5 billion when Jobs took charge.

If Jobs hadn’t persuaded Gates to invest $150 million in Apple, it would have been even lower. He argued that keeping it afloat, could help Microsoft in its fight with the Justice Department.

At the start of the turnaround in 1997, unlike Welch’s initial approach to GE, Jobs said the cure for Apple wasn’t cost-cutting. It was to innovate its way out of its tight spot.

So what did he do first?

He focused on two things all owners do to innovate – customers and cash – the purpose and lifeblood respectively of any business. In the end he did cut costs but created a different business – not a bloodied, demoralised one – the usual effect of cost pogroms.

He started by cutting back to Apple’s core. He pruned a range of handheld and portable products down to one laptop. He cut fifteen desktop models back to one. He carved out all side-line products like printers. He slashed inventory by 80% and outsourced almost all manufacturing.

He cut development engineers because he already had the best operating system in Next – the company he had started and brought with him. He cut software development and distributors. He cut five of six national retailers but opened a store to sell direct to consumers.

His tough choices redesigned Apple brilliantly. Then, with the firm concentrated and focused for growth, he and his team ran it brilliantly. This chart shows the link of their efforts to asset productivity or Asset Spin as I like to call it. 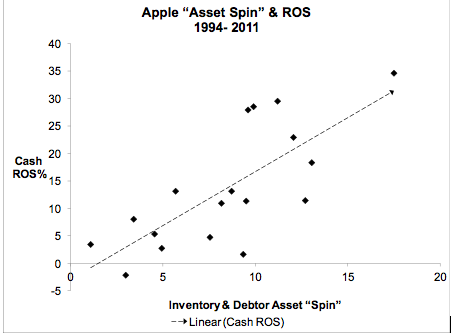 They got combined Inventory and Debtors Spin to a height of 17.5 having started at 3.4 with an 8% Cash ROS. It’s now around 12.0 and their Cash ROS% is consistently above 30%.

Today Apple’s market cap is still bigger than Microsoft and Intel combined – Wintel. For those who still believe ROAM (Return-on-Assets Managed) is an “old economy” measure, look at the link between Cash ROAM and market capitalisation. 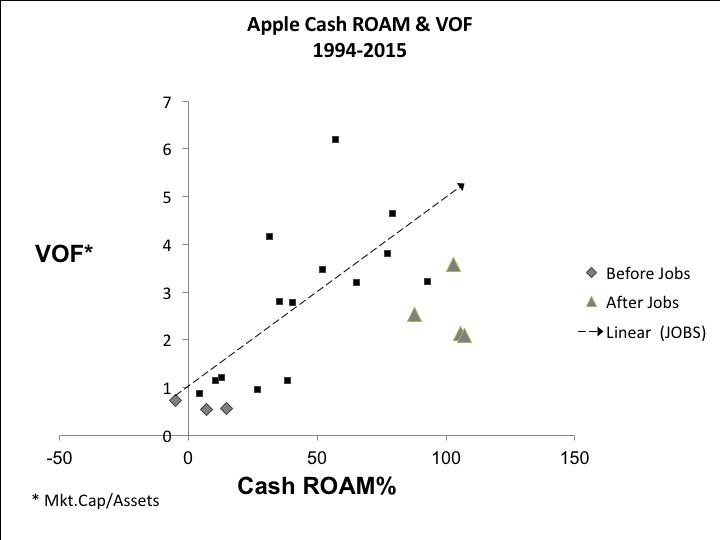 At the end of 2015, Apple’s ROAM on operating assets was 107%. Its asset productivity doubles Microsoft’s and triples most in its sector.

More than 70% of their total asset base is in cash, investments and some intangibles. It’s a big war chest to use to innovate and maximise opportunity.

When asked what strategy he had to compete with Windows and Intel in the PC market – Apple had only 4% of it – Jobs simply smiled and said he’d wait for the next big thing.

The cash war chest he filled up meant he could. High asset productivity generates cash, and buys you time to think. It creates options and opportunity.

Jobs set out to make a “ding in the universe”. He did it by leapfrogging what customers, not competitors, were thinking and created new markets. He made Apple different – the prime strategic move to make – and turned it into a low-risk, high-return business.

Today, it is a fortress circled by a moat of high Asset Turn, high ROS and high Cash ROAM, no debt and lots of cash.

It continues to grow from strength to strength with its customer focus under Tim Cook and his team.

* Ted Black runs workshops, and coaches and mentors using the ROAM model to pinpoint opportunities for measurable, bottom-line, team-driven projects. He is also a freelance writer with several books published. Contact him at [email protected]