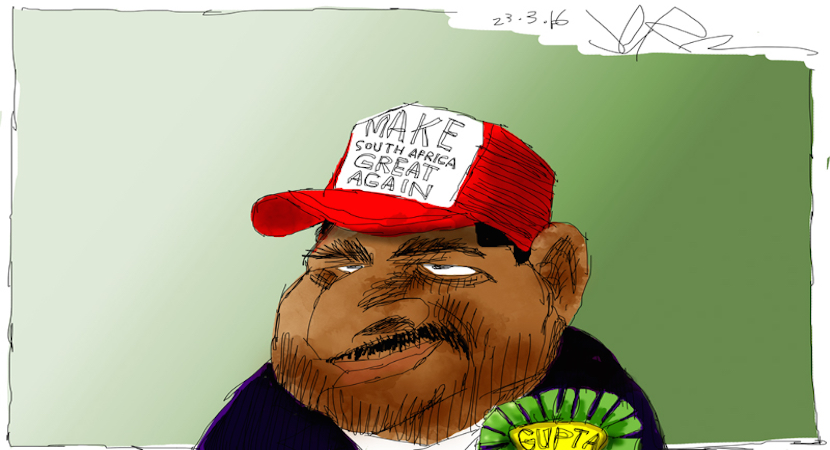 Here’s a brilliant assessment of the implications of the Gupta bombshell for President Jacob Zuma, the ANC and South Africa. Azar Jammine, chief economist of Econometrix, nails it in this analysis of the way the Gupta family influenced Zuma and the forces which will be triggered by their moonlight flit to Dubai. As he points out, the favourable reaction of the Rand shows investment market delight at the development. Money market spreadsheet jockeys in London and New York are now betting from a rapid Presidential exit. Much like what they expect in the wake of the anticipated impeachment of Zuma’s BRICS counterpart, Brazilian Dilma Rousseff. Jammine has produced a must read for anyone wanting to make sense of the noise around the Zupta phenomenon. – Alec Hogg

The political/economic environment in South Africa continues to be subjected to daily shocks of new news related to President Zuma’s refusal to step down as President of the country notwithstanding a host of scandals surrounding his incumbency. Second to accusations about the President not abiding by his oath of office to support the Constitution has been his associations with the notion of “State capture” or as some critics would call it “Presidential capture” through which he has been seen to be granting favours specifically to the Gupta family presumably in return for benefits accruing to himself and his family. In the face of a horrific onslaught on their involvement with the president, the Gupta family announced on Friday that they were resigning from both the boards and management of Oakbay Investments and Oakbay Resources and Energy. Specifically, there has been a suspicion that the Gupta family has tried to secure beneficial deals for Oakbay related to supplying coal to Eskom and supplying uranium for the controversial new nuclear power stations earmarked for building in coming years. What has exacerbated the notion of “State capture” have been statements made by former ministers as well as current Deputy Minister of Finance Mcebisi Jonas, to the effect that they had been offered cabinet promotions or appointments by the Gupta family, presumably in return for favours that might secure lucrative deals for Oakbay.

A week ago a number of key financial institutions announced the termination of their associations with Oakbay, presumably in order not to be tainted themselves with the brush of beneficially helping and being associated with the notion of State capture. Most importantly, Oakbay’s auditor, KPMG, announced that it was ceasing to act as auditor for the company. This was followed by announcements by FNB and Standard Bank as well as Sasfin Bank that they were also unravelling Oakbay’s bank accounts and other financial interests from their organisations. These moves have dramatic implications for the continued existence of Oakbay. In the case of KPMG’s withdrawal, this immediately threatened to have Oakbay’s listing on the JSE terminated, on account of the fact that the stock exchange requires any listed company to have an “accredited auditor”, i.e. an auditor registered with the IRBA, which is the South African audit regulator. Also not having an official bank associated with its business, would further jeopardise Oakbay’s ability to continue running a going concern.

With such an existential threat overhanging the business, the Gupta press release intimated that thousands of jobs were under threat as a result of the inability of the organisation to continue (presumably without having an auditor and associated banker). Oakbay Investments has invested more than R10bn in South Africa and employs more than 4 500 people. If one takes all these employees’ dependants into account, the risk would be that tens of thousands of people’s livelihoods would be at stake. However, there is a more sinister reason as to why it has been necessary for the Gupta family to withdraw. Coupled with their press release, in a separate release, Duduzane Zuma, who is President Zuma’s son, who hitherto has also had significant investments in Oakbay, announced that he was exiting his investments from the companies. It is clear that without an auditor and without bankers, Oakbay’s days as an ongoing concern would be numbered. Both the Gupta family and Duduzane Zuma would stand to lose hundreds of millions of Rands as their investment would be wiped out. It is probably this, more than any other factor, that must have inspired the move to withdraw from direct involvement. Because of the potential losses to the broader Zuma family, there can be no doubt that the move would have had the President’s blessing.

Will It Be That Easy For Oakbay To Get An Auditor And Banker?

In the case of the Gupta’s, there was no information in the press release whether or not they intended selling out of the Oakbay set of companies. Such a possibility is now feasible if one assumes that the company succeeds in securing the services of an accredited auditor, as well as a reputable banker. The question we would like to pose is whether any auditing firm or banker will still be willing to take on overseeing the financial statements and interests of Oakbay given the stigma associated with the relevant companies. The fact that the Gupta family might still have a significant interest in these companies will surely leave a lot of reticence on the part of any interest group to become involved. All one can suggest is that some way out of this quagmire has presented itself to the family and to Duduzane Zuma, to encourage them to make the moves they have.

Stigma Of State Capture For President Zuma Likely To Linger On

Some might argue that the latest moves are directed at lifting some of the pressure on President Zuma to resign in response to his association with the notion of State capture. Unfortunately, the stigma associated with the fact that under his watch ministers were approached for positions by the Gupta family is unlikely to disappear simply because they have withdrawn from the Oakbay group of companies. Suspicions still abound of this being part of the deal through which the President might wish to withdraw investment assets from the country prior to his departure from his role as President. In other words, it is unlikely that tensions surrounding the Presidency and its implications for the ANC’s prospects in the forthcoming local government elections, will dissipate any time soon.

Rand Reacting Favourably To President Being Brought To Book Indirectly

Probably not coincidentally, the Rand recovered some 2% of its value towards the end of last week in response to recent developments. Firstly, the outspoken nature of diehard ANC stalwarts urging President Zuma to step down has reached such a crescendo that the markets are increasingly anticipating that the President will not see through his term of office. Ironically, this has coincided with similar strength in the Brazilian Real on growing hopes that President Dilma Rousseff will be impeached in that country. Secondly, the government managed to raise a $1.25bn 10-year international bond with a coupon of 4.875%, which is 3.35% higher than the rate available on corresponding US 10-year Treasuries. Most importantly, this bond issue was twice oversubscribed. This suggests that international investors are still interested in taking on South African government debt notwithstanding the threat of credit ratings downgrades. It might also indicate that risk appetite for South African government bonds has improved as a result of the perception of judicial independence and respect for institutions and the Constitution as a result of the Constitutional Court ruling on the financing of President Zuma’s homestead in Nkandla. There can be little doubt that a more favourable risk environment towards emerging markets more generally, might be helping to sustain appetite for South African government bonds. A reduction of fear of sharply higher US interest rates has been helping to drive money back out of the Dollar and into emerging market assets, with the yield substantially higher than those available on US instruments. Nonetheless, the development has to be seen also as a statement of relative confidence in the outlook for the South African economy and its management notwithstanding the political turmoil surrounding the Presidency.