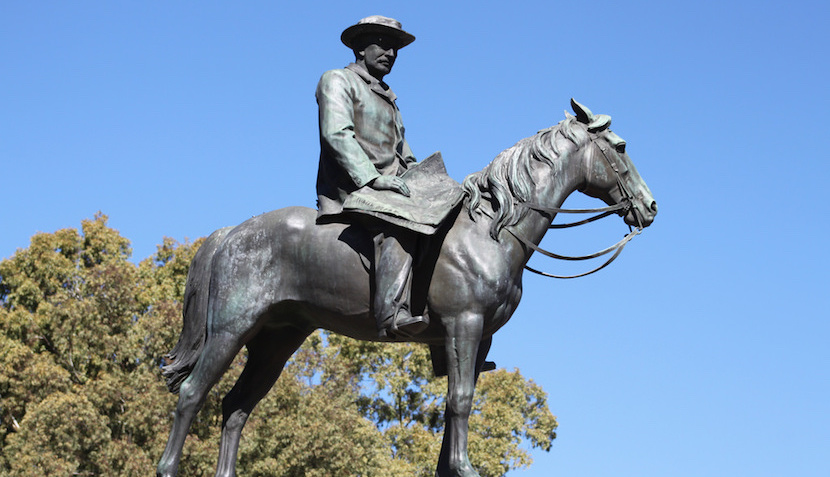 While the Gupta family has all but captured the South African state and so compromised its leadership that it is incapable of effective governance, we may take comfort in the fact that this is not the first time this has happened in Southern Africa.

The French have a saying, plus ça change, plus c’est la même chose (The more things change, the more they stay the same) coined by Jean-Baptiste Alphonse Karr in 1849. This was 40 years before Rhodes corrupted and bamboozled Lobengula and nearly 200 years before the Guptas did the same to Zuma.

128 years ago another band of rapacious foreigners captured the state of an independent African country, eventually taking the whole region.

The parallels between Rhodes and his band of scallywags and the Gupta brothers are remarkably similar.

Both were foreigners to the region, Rhodes and his men from Great Britain and the Gupta brothers from India.

Both hoodwinked, for their own advantage, men of great power and of Zulu origin.

Jacob Gedleyihlekisa (One who laughs while Crushing his Enemies) Zuma and King Lobengula, are both of Zulu ancestry.

Lobengula’s father Mzilikazi, fled the Mfecane (Great Crushing) orchestrated by King Chaka when the two fell out. He took his people, the Matabeli to the lush watershed that lay between the Limpopo and Zambezi rivers.

Here Lobengula formed his own empire by subjugating all the other tribes in the area, the Shona in particular suffered grievously despite being numerically superior. This cruelty would later be avenged in spades when, ninety years later, another rapacious leader, Robert Mugabe snatched the reins of power in that benighted country.

Both new leaders immediately purged their countries’ leadership of all enemies, both real and imagined. Zuma targeting the Xhosa-dominated administration he had inherited and Lobengula any dissenting impis, killing several indunas and their troops before seizing total control.

At both leaders ascension to power, followers vowed to die for them if the need arose. A certain troublesome Julius Malema for Zuma and many indunas for Lobengula. The followers of both leaders would come to eat their words when they eventually realized that their leaders had biblically sold them out for a mess of pottage.

Both leaders are targeted by foreign schemers

Cecil John Rhodes viewed Lobengula’s empire as his only real barrier to total domination of Africa and his dream of a railroad from Cape to Cairo. He saw that by annexing Matabeleland, and the territory the Matabele controlled  called Mashonaland, he would have taken a Great Leap Northward with the countries north of the Zambezi ripe for the plucking.

The Gupta’s on the other hand, saw a leader already severely compromised (Zuma had hundreds of charges of corruption pending against him) and who was also ripe for fleecing.

The Gupta’s had the easier job in that they had a “Cerified Corruptee” in Jacob Zuma. The courts had already found against his original Indian corrupter and therefore against Zuma by association.

Rhodes on the other hand had to deal with a leader as yet uncorrupted. Much more seduction was needed to stimulate greed and avarice in Lobengula in comparison to handling the rather round-heeled Zuma.

Helping the machinations of both Rhodes and the Gupta’s was the functional illiteracy and innumeracy of both Lobengula and Zuma. Neither had any formal schooling, despite nearby missionary schools. Here were two unsophisticated men who were incapable of fully understanding the laws and contracts of their times. Ideal subjects to hoodwink and corrupt. Both men had consolidated their power to such an extent that the truism, absolute power corrupts absolutely applied equally to both of them.

It shouldn’t by now come as much of a surprise that the Corruption of the Two Zulu’s came about through the manipulation of mining rights and the supply of arms.

Rhodes started his capture of the Matabele state by persuading Lobengula to sign a treaty (The Rudd Concession) which, at first sight, seemed only to grant Rhodes the right to prospect and mine anywhere in the Matabele sphere of influence. This Rudd Concession, used in tandem with two other concessions purchased by Rhodes from another pair of foreign opportunists Maund and Leask, would be the instrument that enabled Rhodes to ultimately annex the entire country together with vast territories north of the Zambezi and name them after himself.

In exchange for this, Lobengula was offered a monthly salary in perpetuity of £100, a steamboat on the Zambezi and 1000 Martini-Henry rifles with 100 000 rounds of ammunition.

In true arms-deal style, the supply of rifles and ammunition was to be kept a secret from the British Foreign Office and more importantly from the Boers to the south who Lobengula saw as the main reason he needed rifles.

The reason for secrecy regarding the British was that the Foreign Office frowned on the supply of armaments to any natives in the Empire because they may well be used against British troops in the future as they were in fact used later when the Matabele rebelled against the “stealing of their country” by the new Rhodesian settlers.

The Foreign Office also felt that they would be obliged to supply Chief Khama of Bechuanaland a British protectorate, if the chief found out about the rifles.

When eventually the British government did find out about the rifles, Rhodes told them that the Matabele were much more dangerous with assagais and not at all familiar with firearms.

The Guptas were not involved in the original arms deal that marked Zuma indelibly as a corrupt man, but they were involved in a deal with the state arms company, Denel, the details of which are only now coming to the notice of the public. It seems that Denel may have sold the family silver to Saudi Arabia in a munitions factory deal brokered by the Gupta’s.

Gupta manipulation of mining rights has certainly been apparent, with many under the counter dealings regarding the theft of iron ore mining rights to the manipulation of coal supplies to ESKOM and the purchase of a uranium mine in anticipation of another corrupt deal between Russia and the SA state to supply nuclear power to its long suffering citizens.

Both Zulus throw their loyal followers under the bus or wagon

When Rhodes’ company, The British South African Company began sending hundreds of settlers, miners and policemen into Matabeleland, Lobengula’s faithful indunas began complaining that he had sold the country out to foreigners.

A rebellion against the King was becoming a probability.

Horrified by these rumblings, Lobengula tried to secure his position by deflecting blame.

Faithful Induna Lotshe, who had supported the  granting the Rudd concession, was condemned for having misled his king and executed, together with his extended family and followers, more than 300 men, women and children in total.

This attempt to redirect the blame for his foolish action brought temporary relief to Lobengula, but the infamy of the move was to echo down the centuries when Zuma did a similar thing to his faithful Ministers after the foolish handling of his own Waterloo, the Nkandla saga.

How it played out for the leaders and their countries

Eventually, when the crowds of immigrants became intolerable, and the British settlers interfered in the traditional Matabele molestation of the Shona tribes to the north, the Matabele rebelled.

Lobengula was at last convinced that he had been hoodwinked saying, “the Chartered Company had come not only to dig the gold but to rob me of my people and country as well”

On 13 August 1893, Lobengula refused to accept the salary due to him under the terms of the Rudd Concession, saying “it is the price of my blood”.

The next day, Jameson, Rhodes’ representative, signed a secret agreement with local settlers at Fort Victoria, promising each man 6,000 acres of farmland, 20 gold claims and a share of Lobengula’s cattle in return for service in a war against the Matabele.

Lobengulas recently acquired Martini-Henry rifles proved no match for the settlers Maxim guns and the rebellion was quickly put down.

Lobengula fled north to exile where he soon died , probably from Smallpox and the Matabele nation was left in tatters to await further assaults from the North Korean Battalion under the orders of the previously disadvantaged Robert Mugabe and his disgruntled, grudge-bearing Shonas.

Rhodes, after the war, paid for the education of three of Lobengula’s sons, the start of his philanthropic educational legacy that lives on today as the Rhodes Scholarship. Interestingly, the first beneficiaries were blacks of Zulu descent.

The whole Zupta story has not yet played itself out, but if we are to presume that a similar outcome will result, exile and ill health could follow and the country falling into the hands of scheming foreigners before it is returned to an opposing tribe who will exact retribution for past mistreatment.

Zuma could echo Lobengula’s feelings about the British, replacing “England” with “the Guptas“ when he said “Did you ever see a chameleon catch a fly? The chameleon gets behind the fly and remains motionless for some time, then he advances very slowly and gently, first putting forward one leg and then the other. At last, when well within reach, he darts his tongue and the fly disappears. England is the chameleon and I am that fly.”