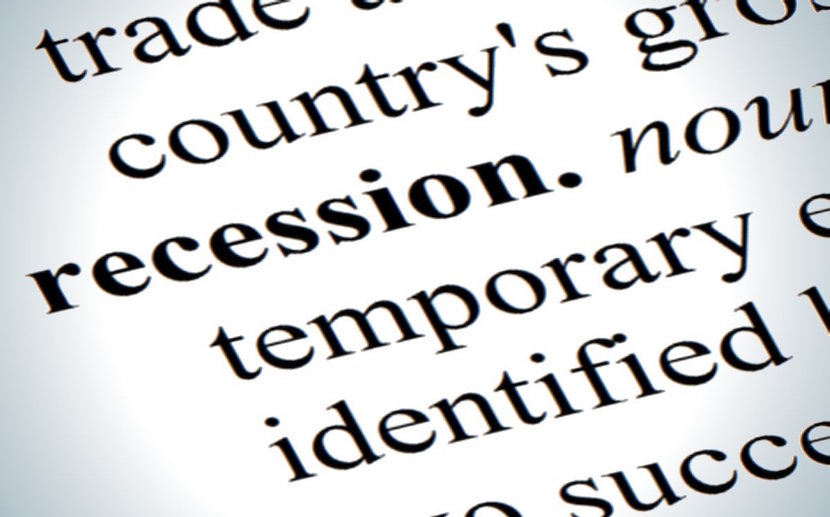 South Africans sighed relief when the ratings agencies offered the country a reprieve but the reality of the task at hand was soon evident, given the negative first quarter growth. The -1.2 percent puts South Africa on the doorstep of an official technical recession but in his analysis below, Dwaine van Vuuren says the country’s already in one. The numbers are scary. The article was first published on Sharenet Views. – Stuart Lowman

As we forecasted in a prior article, SA printed a negative 1.2% quarterly GDP growth for the first quarter of 2016. This is the 6th worst quarter for the SA Economy in 23 years, spanning the entire post-apartheid economic landscape.

This is aptly shown in the first chart below, that displays all 92 quarterly GDP growth prints since 1993 sorted from worst to best: 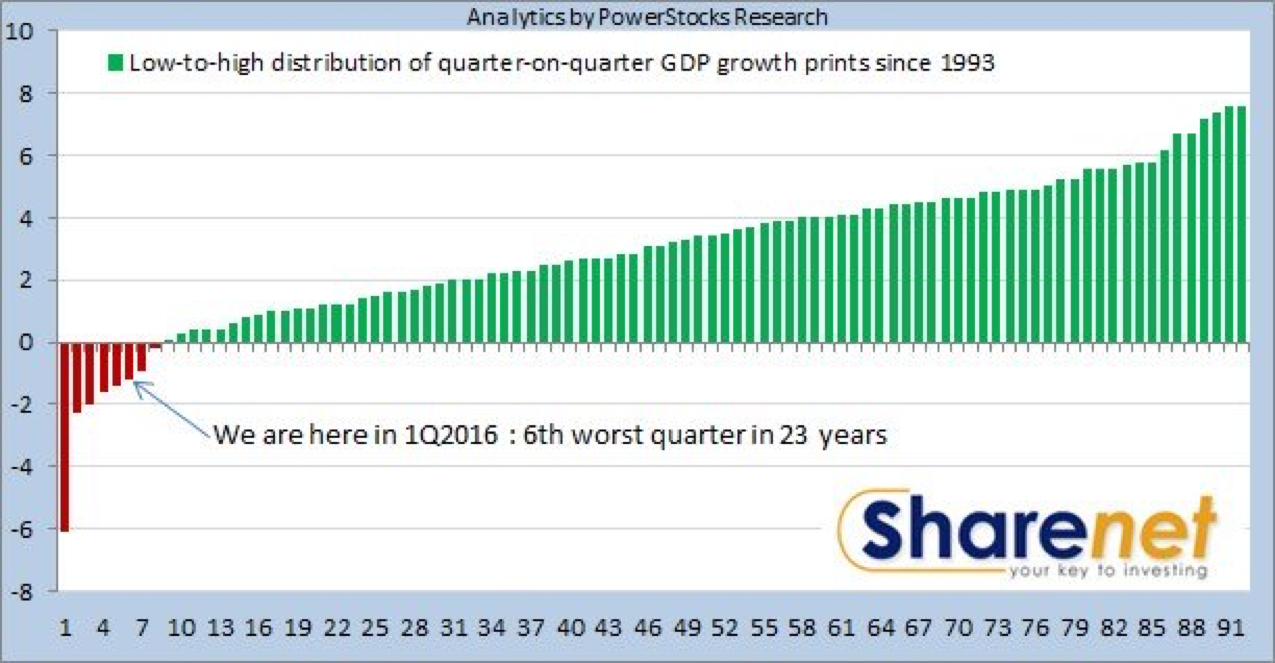 The chart below shows that the present administration under Zuma’s two terms has achieved little to restore economic growth to the peak achieved in 2006 under Mbeki’s commodity boom and recovery from the Great Recession in 2008 never managed to come close to pre-recession averages: 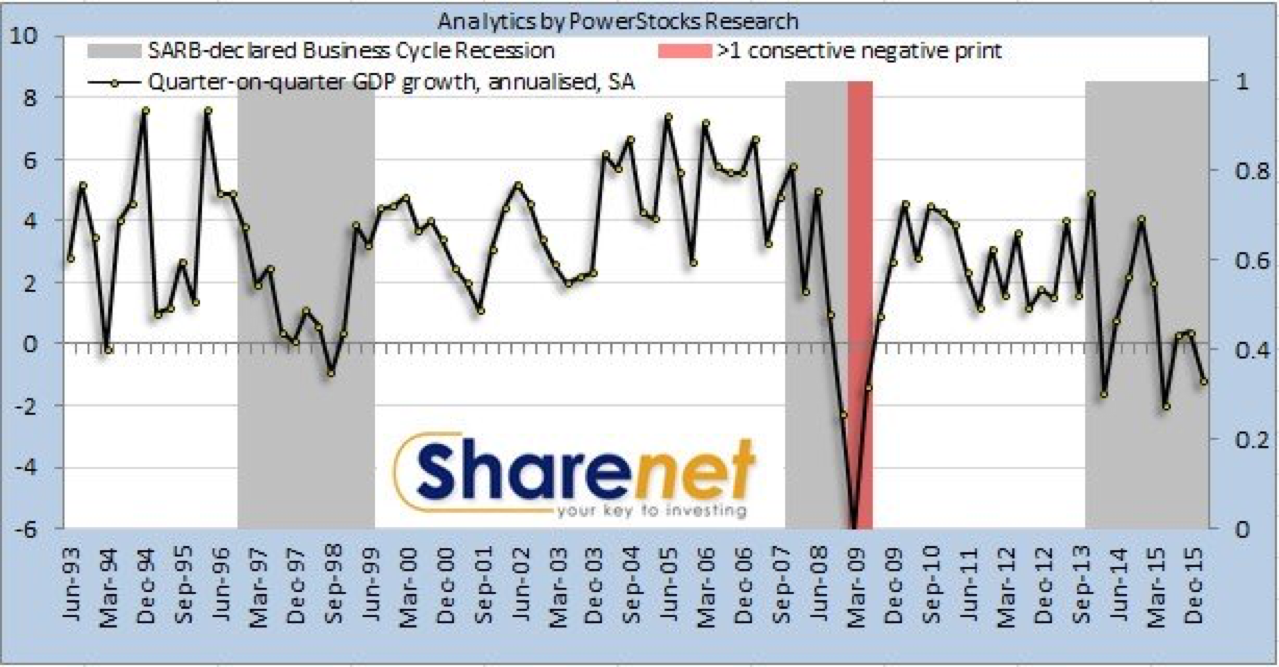 I want to point out something very important here – everyone is focusing on avoiding a “technical recession” defined as two consecutive negative quarterly GDP prints. This is the wrong thing to be looking at. Nobody uses this definition anymore. There has only been one occurrence of this in 23 years, highlighted in the shaded red area above.

What we should all be focusing on is our Business Cycle Growth and its associated recessions. We have had 3 recessions since 1993. The 1997/8 recession that lasted a grueling 33 months only experienced ONE negative quarterly GDP print! The greatest recession in living memory in 2008 only experienced 3 negative GDP quarters, despite the recession spanning over 7 quarters! Similarly, we are currently 28 months into a recession that the Reserve Bank declared has started in November 2013 and we have seen our 3rd negative GDP print. Note how poorly the presence of the first negative GDP print lags the start of the last 3 recessions. It is quite possible we ensure a steep recession now and never even see the elusive 2 consecutive quarters of negative GDP that everyone is looking for. In fact, by the time you see two consecutive negative quarters of GDP growth, the worst is probably over!

No developed country uses two quarters of negative GDP growth to define a recession anymore. The U.S National Bureau of Economic Research (NBER) and the OECD all use the Business Cycle approach to measuring recessions. As we have demonstrated above, quarterly GDP prints can lag the business cycle significantly and the presence of one or two negative quarters cannot be used alone to determine peaks and troughs in the economic cycle. At PowerStocks Research, we maintain a monthly updated Business Cycle Index for the SA economy for our subscribers, that called a top in the business cycle 3 months after it actually occurred. Through the whole of 2014 and 2015 we have been showing >80% probability of recession, sometimes >90% much to the disbelief of most people, even our own clients. The problem with recessions is that by the time everyone acknowledges we are in one its almost over and certainly too late to act upon it. The Business Cycle Index is shown below together with the last 11 business cycle recessions since 1960. We are in the 4th largest business cycle contraction since 1960: 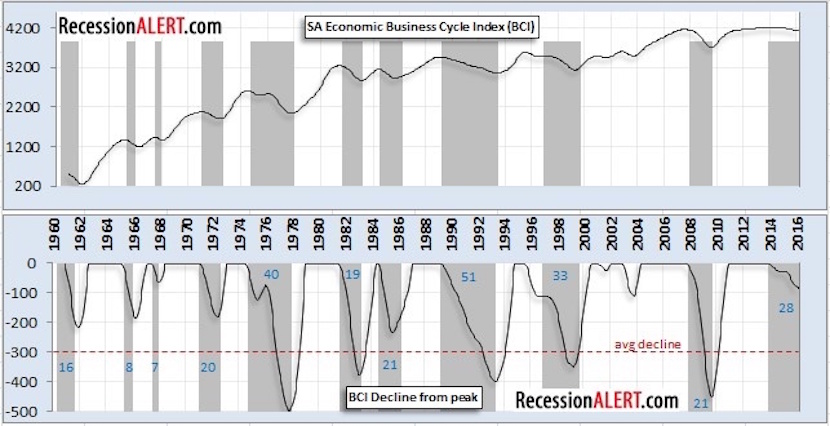 We doubt we will see a negative GDP print for the 2nd quarter of 2016. It will more than likely be mildly positive. But this should not lull us into thinking we are in the clear – there have been many bone-crunching recessions since 1960 without the presence of two consecutive negative quarters of GDP. In all likelihood things are going to get worse before they get any better, with the BCI plumbing to at least -200 before bottoming out.

The irony of all the ratings agencies reviewing us in December 2016 is that our economy is likely to be the worst around that time, just getting ready to make a recovery! One can only hope that Government, Business and Labour can pull their act together before then to allow us to avoid a Junk rating.