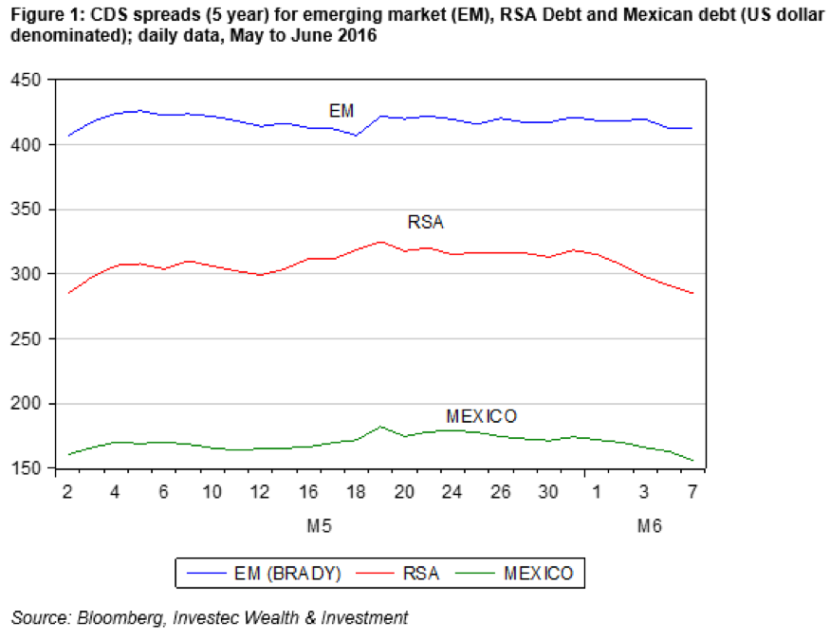 South Africa has cleared the first hurdle. All three rating agencies gave the country a reprieve, which gives 6 months to get the ball rolling in the right direction. Change will take longer, and words, especially those of Pravin Gordhan, saved the country from a cliff, but the next step is action. And hopefully it’ll be an exciting six months for South Africans. Investec’s Brian Kantor looks at the markets reaction post the S&P decision, and asks if there’s more favour to be shown. And there’s plenty room for improvement as Kantor shows how SA’s credit rating in the market and the currency have not regained the status both enjoyed prior to the Zuma intervention in December, when compared with other Emerging Markets. Another insightful piece. – Stuart Lowman

The markets have reacted favourably to the S&P rating decision – is there more favour to be shown?

The markets have reacted favourably to the Standard & Poor’s (S&P) decision to leave SA’s credit rating broadly unchanged that was announced after the SA markets had closed on Friday, 3 June. Clearly the danger of a formal derating of RSA debt was reflected in market yields before the S&P announcement. As we show in figure 1, RSA bond yields and risk spreads have narrowed. The current spread of about 285bp provided by a RSA five year bond over a US Treasury of the same duration now indicates a near investment grade status in the market place. The spread is shown below where it is compared to Credit Default Swaps (CDS) on high yield emerging market (EM) bonds and also on Mexican bonds of the same duration. These spreads represent the cost of insuring the debt against default. 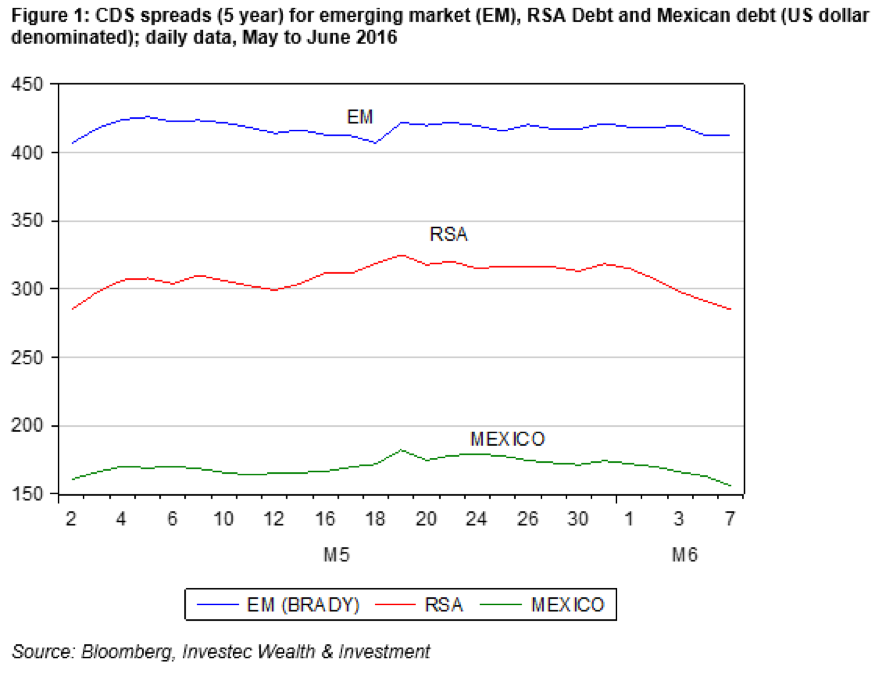 In figure 2, we show how RSA debt has enjoyed something of a re-rating in recent days when compared, as it should be, to other EM debt yields. The yield gap between EM and RSA debt has widened, indicating an improved status for SA, while the extra yield provided by RSA debt compared to Mexican debt has also declined from about 140bp. A longer view of these relationships is also shown in figure 3, which shows that RSA debt has suffered a de-rating in the market place since early 2015, a de-rating magnified by the Zuma intervention in the Ministry of Finance in December 2015. While RSA yields have declined in a relative sense over recent days, SA’s credit rating in the market has not regained the status it enjoyed prior to the Zuma intervention. 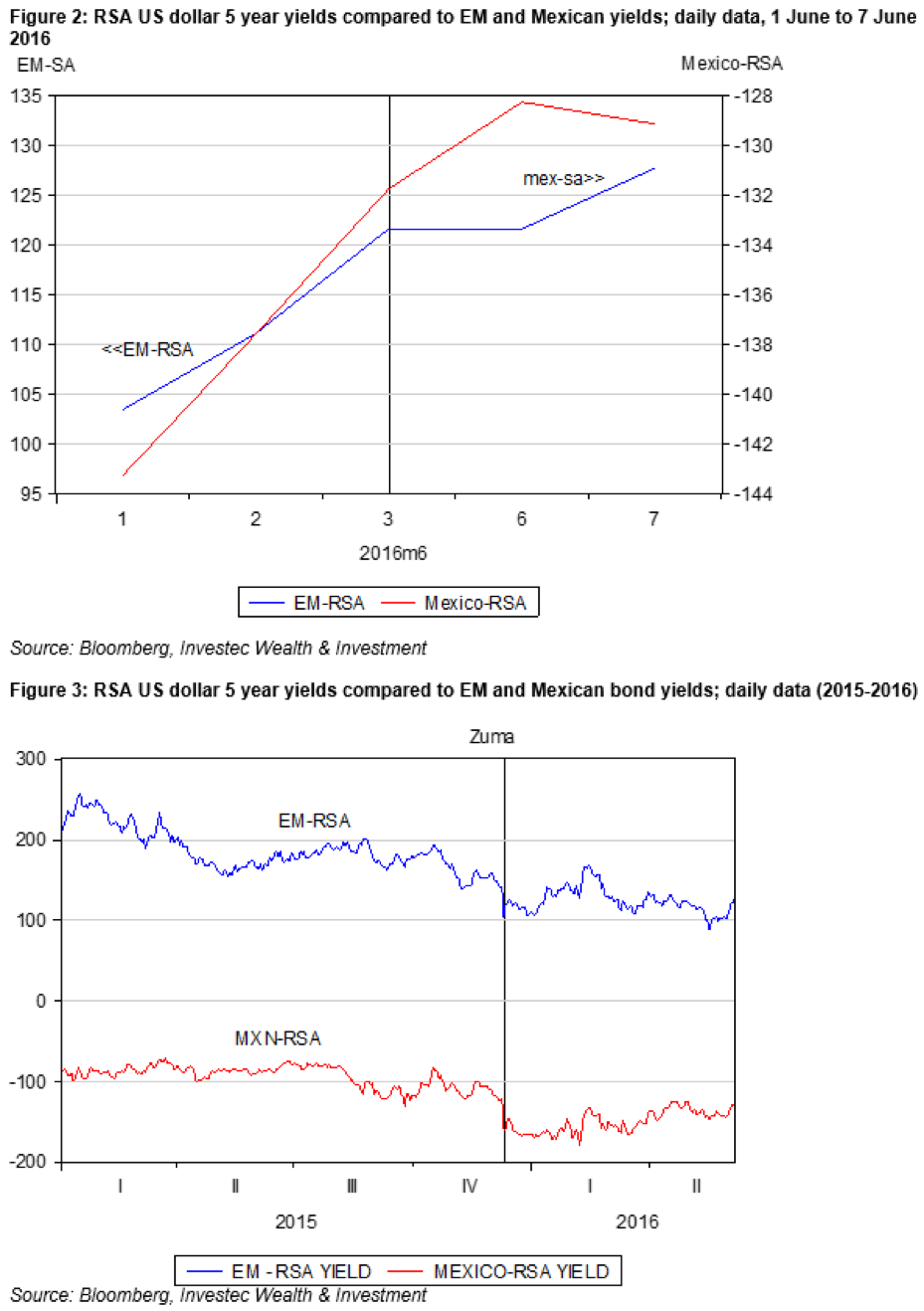 A similar pattern of improved sentiment has been revealed in the foreign exchange markets. The rand has gained value vs the US dollar recently, not only in an absolute sense, but also relative to other EM currencies that might be expected to be influenced by moves in the US dollar vs all currencies. In figure 4, we compare the USD/ZAR rate of exchange to that of an equally weighted basket of nine other EM currencies (Turkey, Russia, Hungary, Brazil, Mexico, Chile, Philippines, India and Malaysia). As Figure 4 shows, the rand and the average EM currencies have gained against the US dollar recently. However the ratio of the rand to the EM currencies (April 2012=1) has improved from 1.32 in late May to about 1.28 on 6 June, an improvement of about 3%. A longer term view of these relationships is shown in figure 5, where it may be seen that the rand, compared to other EM currencies, is still slightly weaker than it was before the Zuma actions in December. 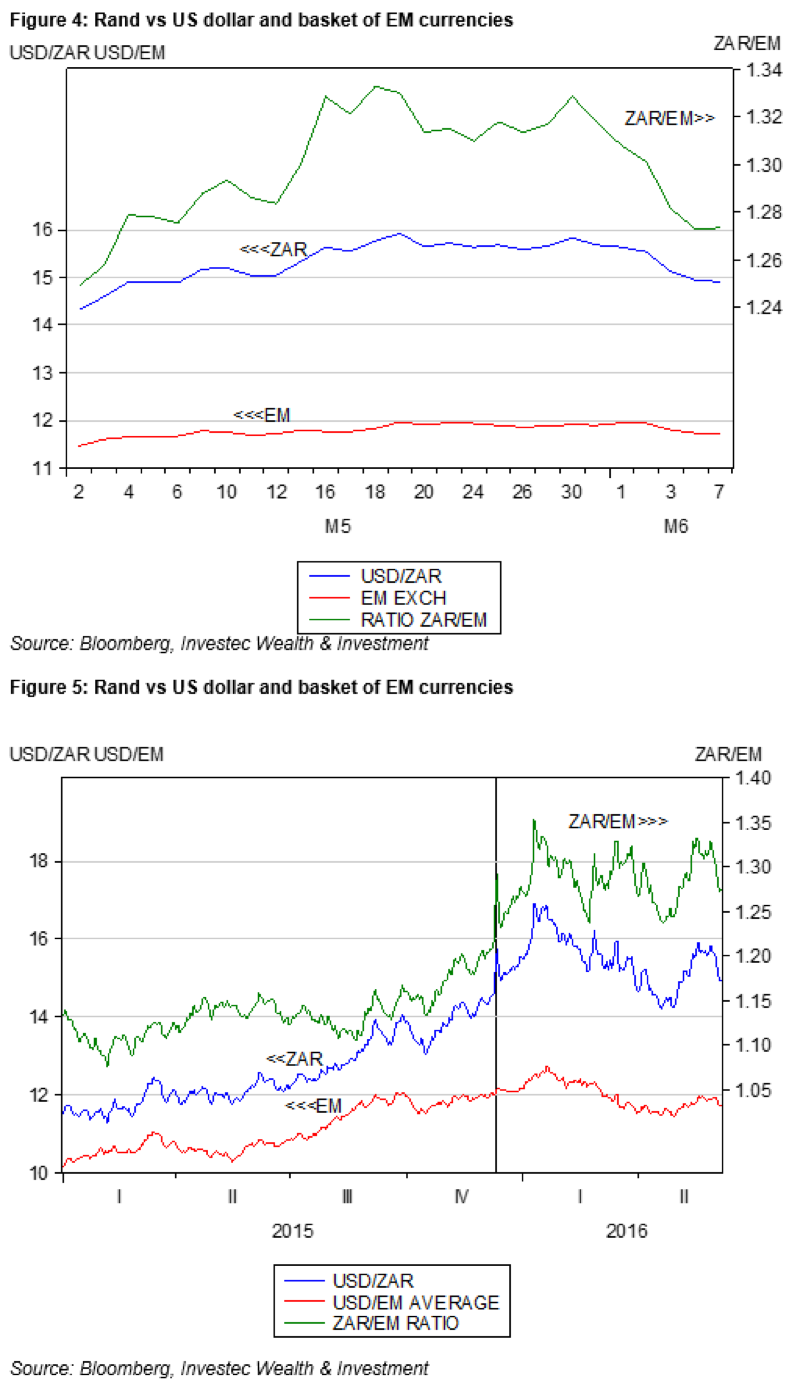 In figure 6, we show the RSA 10 year bond yields since early 2015. We also show the difference between RSA yields in rands with US Treasury bond yields in US dollars. This risk spread may be regarded as the average rate at which the rand is expected to depreciate against the US dollar over the next 10 years. The higher yields compensate investors for the expected exchange rate losses. This risk spread has declined in recent days but remains well above the spreads offered prior to the Zuma shock to the bond and other markets. 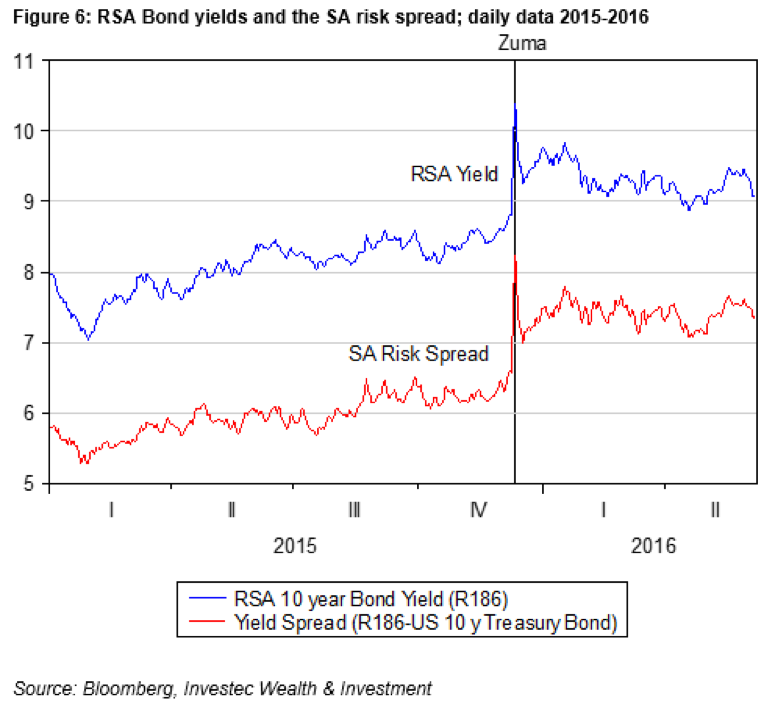 The SA Treasury has been able to convince the rating agencies of its commitment to fiscal conservatism. The Treasury will need to be allowed to get on with the task without interference from the Presidency. The bond and currency markets, given but only a partial recovery, would still appear to regard such interference as a possibility. What the Treasury also needs, as much as it needs the authority to manage SA’s fiscal affairs, is a cyclical recovery and faster growth. Such a recovery would be greatly assisted by further strength in the rand and lower bond yields. US dollar weakness would further help promote such trends, as they have done recently. If such favourable trends were to materialise, the Reserve Bank would surely have to reverse its own damaging interest rate course. A loosening rather than a tightening interest rate cycle is urgently called for. Lower interest rates and lower interest rates expected will make a cyclical recovery all the more likely. SA has enjoyed something of an unexpected reprieve from the rating agencies. A strong follow up in the form of lower interest rates across the yield curve can turn a reprieve into a recovery.