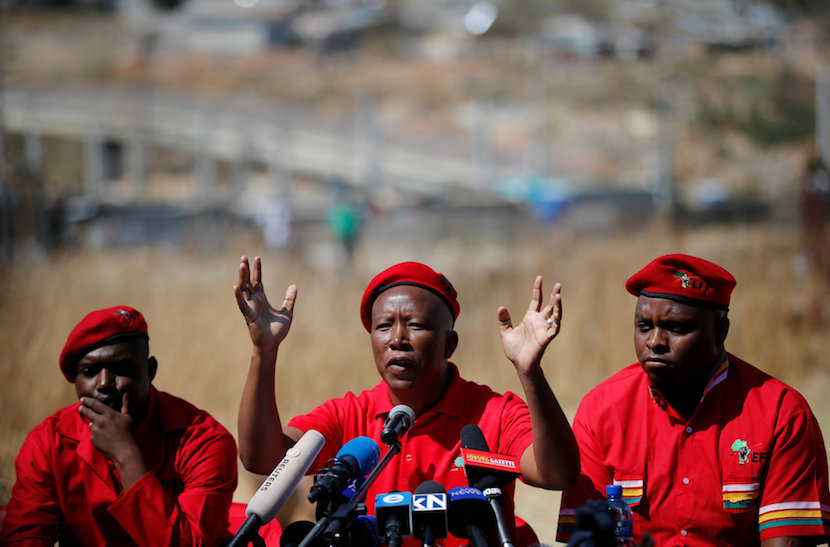 There was a build up of excitement as coalition politics was set to rule South African politics. But it’s all gone rather damp. The challenge now is the big urban areas (Joburg, Tshwane) look set to be run by a minority. And the most likely victim of this are the residents, as decision-making could be split. And while EFF leader Julius Malema has said his party will vote DA, it’s likely to be on a case-by-case basis. The one piece of defence in the DA armour however is Malema won’t side with the ANC as long as leader Jacob Zuma is in power. So while Malema has seemingly lost the kingmaker role, Jacob Zuma may still be the ANC’s trump card, despite them absolving him of any blame for the party’s poor showing in the municipal election. Political analyst Daniel Silke gives his view of how the coalition talk fizzled out, and who’s come out on top. Another thought provoking piece. – Stuart Lowman

The vexed issue of who will control South Africa’s richest and most symbolic Metropolitan Municipalities including Tshwane and Johannesburg became clearer in dual announcements by the major opposition protagonists, the EFF and DA.

Malema attempted to take a moral high ground forswearing the temptation of positions for a more critical and confrontational role on the Opposition benches. Clearly, the twin ‘devils’ of the ANC left him little choice but to opt for a lesser role – although one he sees as being critical to the passing of any budget and associated policy-making.

Malema did, however, confirm the deep personal disdain he has for President Zuma. For all the other unrealistic demands he placed at the front door of the ANC to dangle the carrot of an EFF/ANC partnership, it was the Zuma factor that seems to be the critical stumbling block in restoring the familial links.

This level of animosity is so great, that Malema was willing to accede to broader Opposition growth led by the DA and in so doing, was keen to shut out the ANC from most hung councils – especially in the prized Tshwane, Ekurhuleni and potentially City of Johannesburg.

Malema took full advantage of his announcement. His choice of location – on a dusty field in impoverished Alexandra had an air of fine movie direction to it. And whilst the visuals played to his constituency, so did his message. His characteristic defiance was vintage Malema.

And, his message was crisp. Beyond this, he articulated themes pertinent to the national discourse on land, poverty, corruption and of course, on Jacob Zuma. Malema milked his announcement to the full.

The repetition of his policy platform and wish list – as unrealistic as it was – continued to cement him firmly in our political discourse.

So whilst Malema firmly believes he is in the ‘pound seats’ and that the DA (and ANC) will always come knocking on his door for final approval of budgets and related policy issues, he is also taking some risks.

By excluding himself from the formal process of being part of a coalition government, he gambles that his aggressive and disruptive tactics can further grow his party from the sidelines.

This has worked for him in the past – but the moderate growth for the EFF between 2014 and 2016 suggest that the electorate might need more than just being in Opposition. Voters increasingly want to vote for agents of change who can deliver and have the ability (in government) to do so.

Furthermore, Malema also assumes that his advice will always be sought and his stamp of approval always required. But, what if the DA and ANC find that in their relationship – which will now change as a result of shifting voter dynamics – is enhanced to a point that the EFF is not required as the final arbiter?

Mr. Malema cannot predict the internal dynamics of a broad leadership and policy-related shift in the governing party as it defines a new role for itself.

For the DA, Malema’s decision is perhaps the best possible outcome. If he comes through on generally supporting DA Mayoral candidates without the binding strings that a more formal coalition agreement might impose, the DA gets a crack at governance – albeit ‘minority-style’. And at least, the DA’s white support-base can be safely insulated against calls for expropriation of land and the removal of Die Stem in the national anthem.

Although the DA missed the boat on choreographing a better coalition press conference, it did manage – with the presence of its coalition partners – to present an image of a ‘broad church’.

By integrating the participation of the UDM, COPE and others, the party has also redefined itself beyond its immediate activists and supporters. The DA’s visuals also negated to some degree, the many racial epithets about the party that peppered Malema’s address.

Still, Mmusi Maimane seemed subdued. He lacked a crucial killer political instinct that Malema had only a few hours earlier displayed to hammer home a national discourse – and own it. But then again, it was perhaps not a fitting moment when – unlike Malema – you are prioritizing your coalition partners.

Of course, the real challenge is this rather strange beast called ‘minority government’. If either the DA or ANC take the Mayoral chains without a clear majority, service delivery runs the risk of being beholden unto political horse-trading and extreme bickering. And if paralysis and breakdown occur, Malema can quickly take advantage by virtue of his sidelines tactics.

Alternatively, more like minded individuals across the many party divides can find themselves in the interests of the voters – and work constructively together not only to deliver but to alter a future political landscape. This is uncharted waters in method and execution that will test politicians and bureaucrats alike.

Finally, the EFF and DA owned the day. With a floundering ANC following their NEC meeting last week, the momentum is with the Opposition. Should the ANC really be shut out of the positions of power and lose not only the symbols of office but also their ability to dispense patronage and largesse, Gauteng’s Metro’s could become more a future battleground between the DA and EFF – with national ramifications.

Whilst reports of the demise of the ANC are hugely exaggerated, this election cycle has been all about alternatives to the governing party. And both Malema and Maimane – with very different approaches – rubbed salt in their wounds.