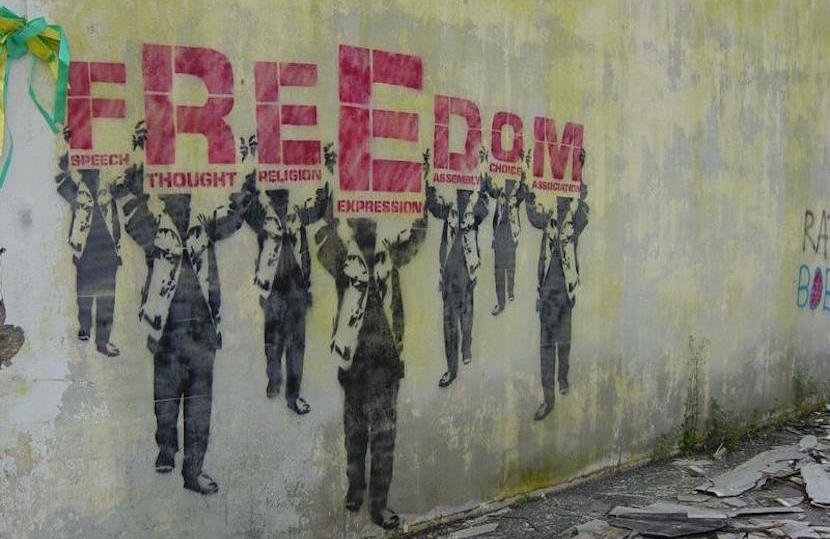 The plummeting rand after yet another manoeuvre by the Hawks to undermine Pravin Gordhan coupled with the President positioning himself to protect State-owned Enterprises against any possible action by Treasury that may impact on the practices of patronage surrounding these entities, further shook already brittle investor confidence.

would have provided Shakespeare with a plot against which Hamlet with all the rottenness in the state of Denmark sounds like a gentle bedtime story.

The intense focus on the tussle between Treasury and (as it often appears to be) “the rest of Cabinet to take sufficient steps to stave off a down-grading by the rating agencies, was diluted by numerous developments since that unique desperate appeal three months ago by the Minister of Finance that South Africans should rally to protect the Treasury: there was Brexit, the turmoil in Tshwane when Thoko Didiza, the local elections leading to the ANC losing its grip on several metros and not least of all Pokémon. But the issue confronting the private sector and the captains of commerce and industry will not go away: Pravin Gordhan with his appeal to the public “to protect the National Treasury staff” and President Zuma with his defiant support for the bankrupt SAA and indicating that he would have preferred Des van Rooyen in the Treasury, have both their supporters in manoeuvres that appear to be an end-game.

In numerous discussions with business people and academics I encountered strong support for Gordhan: “Pravin is our last hope against junk status” and “he understands at least that one cannot spend what you do not have” were some of the comments.

How interesting was it to note that the 22 academics that came out in support of Gordhan after his public appeal for support were all from erstwhile “white universities”? Are they economists of the kind that the #Rhodesmustfall-campaign consider as having a colonial mind-set whilst the economists from the universities of Fort Hare, Walter Sisulu and Zululand are perhaps silently supporting Zuma and embracing an “African economic paradigm”?

Business leaders are sitting tight, most of them whispering wishes that (what they conceive to be) a Ramaphosa-Gordhan dyke would be strong enough to withstand the flood of state capture and corruption. Why is business in this predicament? Why are they pinning their hopes on Ramaphosa who remains silent on the rape of the Constitution by Zuma, but vocal about “we will do it the ANC way”? Which ANC way: The Zuma way? The Luthuli way? The torture camp way? The Parliamentary lapdog-way? Their “Cyril is different and understands business” sounds akin to medieval incantations to rid the settlement of evil spirits.

It is time for business leaders, and academics, and every person who treasures freedom and liberty, to realise the choice in the country is not between “the dark knight of Nkandla” and the “the Gordhanian Guard at Treasury”. Both those forces embrace a collectivist ideology that is anathema to liberty. To demonstrate the impact of the Zuma-Gordhan teamwork, I adjusted a graph used by Kokkie Kooyman of Denker Capital by adding the names of the President and Finance Minister. 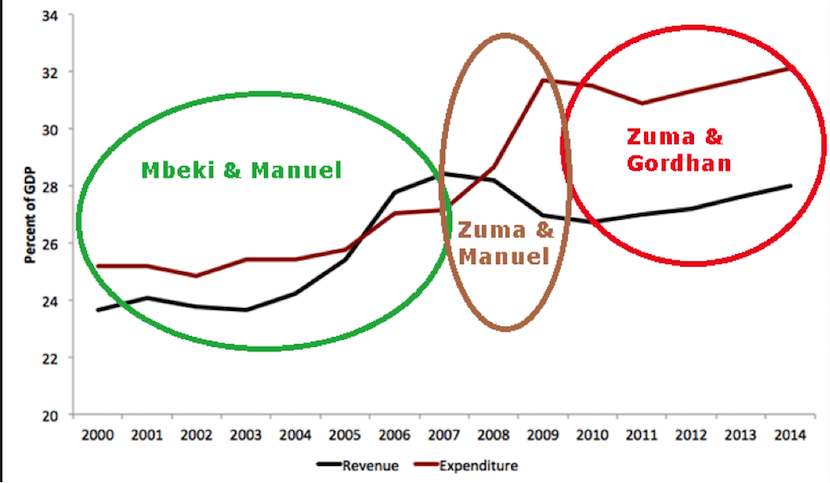 It is obvious that the international financial crisis of 2007-2009 had a major impact on Government Revenue and Expenditure. But the almost parallel lines since 2011 indicate that Gordhan could at best maintain the budget shortfall: there was no closing of the gap. Even in the “golden years” of Mbeki and Manuel the majority of years saw higher expenditure than income (revenue). The widening gap, however, was not only caused by the international financial crisis: it was also caused by an ideological exuberance of government-led growth strategies thereby causing a deterioration of business confidence.

Whilst business leaders in general have far more confidence in Gordhan than in Zuma, it is time for them to go to the dusty bookshelves and look for that old Reader’s Digest of April 1945 that carried the condensed version of Friedrich von Hayek’s The Road to Serfdom. Von Hayek (Economics Nobel Laureate in 1974) showed in that script that collectivist thinking and planning for an equitable and just society with the state taking a central role in planning was the reason why Nazism had triumphed in Germany. The “abandonment of liberalism, whether expressed as socialism in its more radical form or merely as ‘organization’ or ‘planning’ was perfected in Germany, “ wrote Von Hayek. Hitler’s rise was the inevitable outcome of decades of well-intentioned socialism that had buried liberty and individuality. Likewise Stalin with his Gulag was the inevitable outcome of the socialist activists clamouring for the end of Tsarist Russia (a route for libertarian reform of Russia was unfortunately not considered).

Von Hayek argued against the idea that the planning approaches of the Allied WWII strategic rooms should take root in peace time since that would substitute the competitive system. And almost Shakespearean Hamlet-like Von Hayek lamented: “Is there a greater tragedy imaginable than that, in our endeavour consciously to shape our future in accordance with high ideals, we should in fact unwittingly produce the very opposite of what we have been striving for?”

Von Hayek’s arguments indicate clearly why liberty and economic freedom in South Africa has suffered immensely both under the apartheid dogma of the Nationalists and the state-led emancipation dogma of the ANC. Both those approaches embraced social engineering at a massive scale for the “public good” with both creating and protecting centralistic structures that define themselves what the public good would amount to.

In both the NP and ANC ideologies the fundamental libertarian competitiveness was rejected and subdued with the state deciding how freedoms would develop. The Nationalists’ ideology promised equal but separate freedoms in separate statehoods: the practice was quite unequal and unfree. The ANC ideology promises that the state would deliver and guarantee an impressive range of “rights” and “services” with the individuals becoming faceless recipient masses: again the practice is quite different as the 500 non-service protests per annum demonstrate.

Von Hayek’s words of 1945 sound today like a warning against both the National Party and the ANC: “The idea of a political party which embraces all activities of the individual from cradle to grave, which guides his views on everything, was first put into practice by the socialists”. Von Hayek mentioned then that “this collectivism manifested itself even in sport and games”. Is there in principle a difference between the Nationalists (recall B J Vorster denouncing the then MCC for choosing Basil D’Oliveira thus invoking the sport boycott) and the ANC Government with their sport codes and transformation targets (recall Fikile Mbalula preventing certain sport codes from hosting tournaments) deciding who would play whom and where?

Hear Von Hayek’s words: “from the collectivist standpoint intolerance and brutal suppression of dissent, deception and spying, the complete disregard of the life and happiness of the individual are essential and unavoidable… Acts which revolt all our feelings, such as … the killing of the old and the sick are treated as matters of expediency; the compulsory uprooting and transportation of hundreds of thousands becomes an instrument of policy approved by almost everybody except the victims”. Why am I reminded of –

One could almost think Von Hayek had specifically South Africa in mind when one encounters the following comment: “The will of the authority would shape and ‘guide’ our daily lives even more in our position as producers. For most of us the time we spend at our work is a large part of our lives… Hence some freedom in choosing our work is probably even more important for our happiness than freedom to spend our income during our hours of leisure.” Why am I reminded of apartheid’s job reservation policies and the ANC’s policies and legislation enforcing demographics in the workplace?

Von Hayek fulminates against collectivist planning that inevitably have to result in control. His “(n)othing makes conditions more unbearable than the knowledge that no effort of ours can change them. It may be bad to be a cog in a machine, but it is infinitely worse if we are tied to our place and to the superiors who have been chosen for us” recalls the comments of Dr Frank Quint. Quint, a well-known Coloured educationalist in the 60’s to 80’s, when asked whether he was not thankful for the opportunities afforded to him by the apartheid system to scale the ladder, said: “Yes, but when I am at the top of the ladder and look up, I see the foot soles of the lowest white man.” That is the feeling Renate Barnard is experiencing as well.   Freedom in the workplace disappeared because of a collectivistic pursuit for the “common good”.

Von Hayek warned that many economists are content that a planned society will equal the efficiency of a competitive system. “They advocate planning will secure a more equitable distribution of wealth. And it is indisputable that, if we want consciously to divide who is to have what, we must plan the whole economic system.” One can hear these economists time and again on radio shows, like Raymond Parsons pleading that “the very good National Development Plan” should just be implemented.

Von Hayek dreaded the outcome of such approaches: where competition makes way for planning with good intentions, freedom disappears, innovation is squashed, mediocrity trumps talent, progress makes way for decline. For him the only legitimate combination of planning and competition was planning FOR competition, not planning AGAINST competition.

Business leaders and economists would do well to realise the choice in South Africa is not a narrow one between Zuma and Gordhan (collectivists are masters in shunting libertarian choices to side-lines). It is time for them to read again Von Hayek’s clarion call for freedom of choice, freedom to differ, freedom to compete. In pursuing these freedoms the seeds for growth will be sown that will propel society forward. That is the route to not only prevent a downgrade, but ensure an upgrade by the rating agencies.

In less than 24 hours, all the benefits of a rising Rand have been negated by the return of political risk & in #SouthAfrica. #PravinGordhan

That is also the route that will lead to accelerated growth and therefore more businesses, jobs and consumer spending.

The captains of business and industry can observe the current tussle between the good and bad faces of collectivism, and, like Hamlet, lament the air as “a foul and pestilent congregation of vapours”. Or they can open the windows shuttered by both the state-led collectivist ideology of the ANC and the “us-them” apartheid mobilisation of the NP. That would allow in the fresh breeze of individualism that Von Hayek treasured.

The road to serfdom can only be avoided by choosing individualism, since “individualism, in contrast to socialism and all other forms of totalitarianism, is based on the respect of Christianity for the individual man and the belief that it is desirable that men should be free to develop their own individual gifts and bents”.