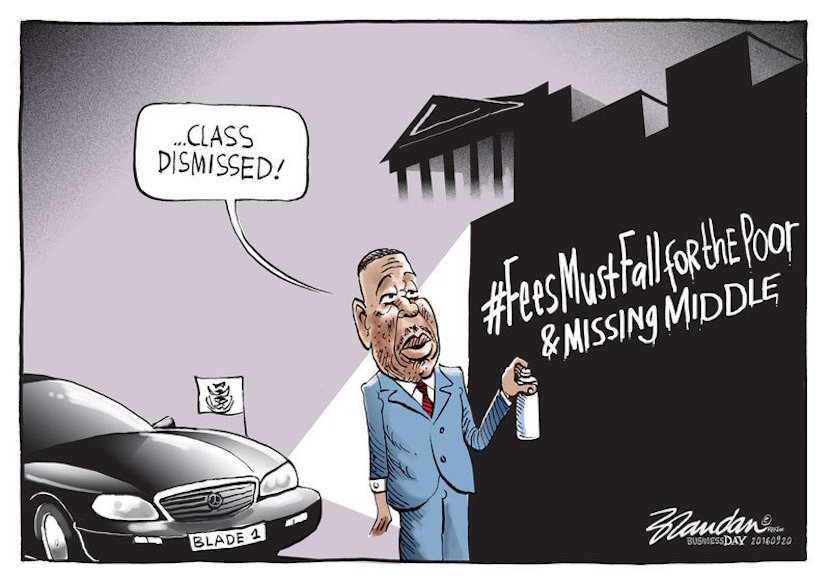 In any debate, for both parties to agree, there is concession. It’s the only way for the two ends to walk away seemingly happy. But when one puts the microscope on the free university debate, the concessions on both sides seem too far apart. Free university comes at a cost. Phumlani Majozi is fairly blunt is his appraisal, saying quality schooling just isn’t free. It goes back to simple economics. And will the debate rages on, thugs destroying the very thing they want and the world looks on, it’s the students who want to learn that feel the most pain. – Stuart Lowman

No doubt it’s been rough in South African universities since the minister of higher education, Blade Nzimande, announced the fee increase cap of 8% for 2017. The shutdown of academic programs at Wits University and the University of Cape Town is testament to the seriousness of the situation. The debate continues on how free education will be funded. Educationists and finance experts are crunching numbers trying to find solutions that will meet the demands of rioting students.

But what disheartens me about this national debate on university fees, is that we are not being honest to ourselves as a nation. We don’t bother asking ourselves about the implications of free education. Those advocating for free education speak of “free and quality” education. But we know, and they should know, that when something is free, it’s usually short of quality.

If the price of a good or service is as low as R0, then it won’t be of high quality; because in a competitive market the price is an indicator of the quality of a good or service. That’s one of the things I learned as an economics student at the university, and it’s something I see every day. There’s a lot of evidence to support that.

For example, compare South Africa’s free hospitals with those that aren’t free. The free hospitals are in deplorable conditions. I don’t think anyone can dispute that. People rather choose to spend their earnings on medical aid schemes for private healthcare when there’s free healthcare in public hospitals. And the reason is simple why people do so; it’s because public healthcare is of low quality, and it’s of low quality because it’s free.

Look at the difference between the free (low fee) public schools and independent schools that charge a price for their education, you’ll find a similar thing.

Over the past fifteen years independent schools that charge a price on education have grown by more than 40%, while free (low fee) public schools continue to decline. Parents are opting for private schools that charge a price instead of free (low fee) public schools. Why? Because they want quality education for their children; and quality always has a price attached to it.

This is true in all business activities we conduct in our lives; it’s economics. When something is free, its quality will be low; because nobody values it; the seller doesn’t value it, and the buyer doesn’t value it. It’s free, why should they?

We should expect a similar thing when rioters have got their free education – our universities will be like free hospitals and free schools. Is that what we want for our children, third class education?

And it’s still unclear to me why education should be free for the poor. Why should we exempt the poor from the financial responsibility of their education? On what basis should they pay nothing for their education? Why can’t someone eager to learn and can’t afford university entrance be loaned the money? To me assisting the poor with loans they will pay back when they work is the least we could do. We could use that repayment to assist the next generation that can’t afford the entry into tertiary education.

But many oppose the idea of loans because of the concerns about student debt – which does not make sense to me. People should take loans for cars and houses but shouldn’t take loans for their education?

Now the notion that taxing the rich more will solve the education fees problem as suggested by Professor Adam Habib, doesn’t make any sense because the rich are already paying a lot in taxes. So they must pay more again? They will leave, they can afford to leave.

Board member Mbali Mkhonto says at some point there will free education but there is a process that needs to be respected. #Fees2017

What worries me is that we’re quick to find solutions on almost all the problems we face. But we tend to be ignorant on the implications of our decisions. In this fees debacle there aren’t solutions there are trade-offs.

Yes there are many things we could do: force other people to subsidize other peoples’ education, or tax the poor through sugar tax and sink the economy, or privatize South African Airways and use that money to finance free education, or tax the rich more of their money. All of this is doable, but expect serious negative consequences on our education when it is all done. Because quality education isn’t free. That is true here in South Africa, and true all over the world.