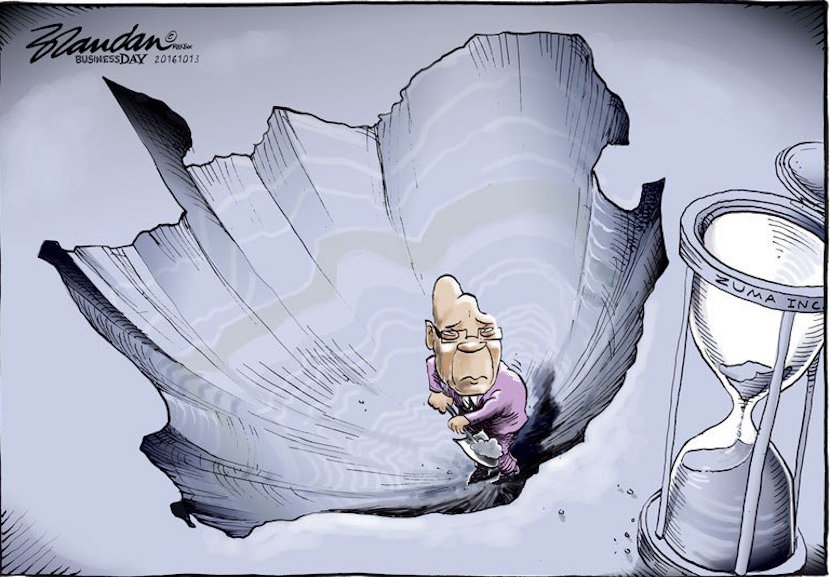 South Africa is in a very precarious situation. The latest affidavit by Finance Minister Pravin Gordhan puts another black mark on the Gupta family, and in turn puts the spotlight back on President Jacob Zuma’s involvement. And off the back of these political shenanigans, which are putting the economy at risk, independent adviser Shawn Hagedorn is assessing the current structures. He’s working on a four part series. The first looked at why a beleaguered president may be a blessing and that he should be given the chance to fix his mess. He then went on to assess the ANC’s policy structure, and how the different interests are largely incompatible, which is blocking any possible reform. In the third instalment, Hagedorn shifts his focus to economics, and how there needs to be a shift away from redistribution towards pro-growth, pro-business. It’s a necessary conversation that needs to filter up especially with the rating agencies set to deliver credit outlooks in December, there’s not much time left to avoid what many are calling an ‘inevitable junk’. – Stuart Lowman

President Zuma is the most powerful person in the country not because he is a visionary or a policy wonk. The pursuit of self interests through coalitions is integral to democracy and capitalism. Thus many people achieve much power in business and politics through managing factions.

Jacob Zuma focuses on behind-the-scenes machinations while those outside his circle awaken to media reports which rarely afford even a glimpse of the background to-ing and fro-ing. It is not realistic to expect desperately needed policy reforms in the next two years without Zuma’s support. His beleaguered status makes such support quite possible.

Zuma’s factional infighting skills have been honed over seven tumultuous decades. How Zuma and his patronage machine become vulnerable, is if the ANC doesn’t achieve a majority in 2019. The risk of this spiked in August from being extraordinarily unlikely to being simply unlikely.

Such risks are now high enough that Zuma and his cronies are seriously motivated to avoid a downward economic and social spiral. Reducing patronage is necessary, yet it ensures nothing. As is obvious to the credit agencies and the IMF, to grow SA’s economy requires profound policy reforms. The interest of the Zuma clan and those of the taxpayers have suddenly become far more aligned.

Such policy shifts could be managed in the absence of Zuma. For instance, the IMF could dictate the changes amid an emergency debt restructuring. Such scenarios would be preceded by a full-blown crisis.

Zuma’s legal pressures could mount to where he is hounded out of office before the 2019 elections. This unlikely outcome would resemble Brazil’s political dramas of the past three years which helped inspire the worst depression in that country’s history.

Having just ousted its president, Brazil faces prolonged economic floundering amid political paralysis. Over half of Brazil’s lawmakers are under indictment or being investigated. What would follow from removing Zuma?

Virtually all of the policies the IMF and credit agencies rally against trace to comrades obsessed with redistribution and opposed to competition. Having such people design economic policies distracted attention thus helping Zuma entrenched his patronage machine.

Given the suddenly real prospect of the ANC being defeated in 2019, Zuma is now seen as being willing to purge policy-designing comrades and to, hesitatingly, rein in cronyism. This, alongside necessarily bold policy shifts, is SA’s best option.

The extent to which SA’s economic policies preclude a healthy future is difficult to overstate. At every turn the comrades show disdain for the fundamentals required for economies to prosper in the 21st century. Rather they fixate on redistribution. There are limits to this approach and they have plumbed them.

The comrades have failed spectacularly. They refuse to accept that redistribution without growth is failing everyone and that it reflects their policy choices.

Excessive reliance on commodity demand should have given way to investing in skills and competitiveness. Instead it was accompanied by over reliance on debt funded consumption by under skilled workers. Thus SA’s growth prospects are now harshly constrained.

If the private sector doesn’t engage Zuma in a pragmatic, solutions-focused dialogue, then a crisis will be necessary to provoke necessary changes. Yet a moderate-sized financial crisis hit two years ago and that opportunity was blundered. Now a slow moving economic and political crisis is gathering momentum and the vague response is mostly to hope Zuma will depart and goodness will prevail.

SA and the world are awash with investment capital. The problem is lack of final demand – more specifically, lack of purchasing power. In SA, this traces to a broad swath of misguided economic policies.

Domestic consumption is going to stagnate in 2017, 2018 and beyond because the money that would have funded growth, must service debt. Follow-the-money-analyses show that various policies redirect taxpayer income to fund low-productivity civil servants and other ineffective redistribution initiatives – with much of such monthly flows then cycling to lenders. This is the opposite of creating a virtuous economic cycle.

That SA has developed much expertise at managing credit would be a positive if the country’s broad economic policies facilitated healthy growth; they don’t. When African Bank’s shocking disclosure in mid 2014 suggested insolvency, SA’s policy making comrades reverted to form and conflated market signals with market failures.

Then, as now, the country needed to reduce household debt. Market forces should have been allowed to play out with regulators overseeing an orderly liquidation. This would have been a windfall to lenders active in the low-income lending space. Thus there was an exceptional opportunity to meaningfully ratchet down maximum permissible interest rates and household debt without damaging the banking sector. Instead African Bank was rescued.

Foreign investors which had lent to African Bank couldn’t believe their luck. To avoid losses to taxpayers, the new African Bank must again market loans which undermine household stability.

The comrades imagined systemic banking risk while ignoring, and then exacerbating, grave macroeconomic risks. SA’s banking system was not at risk. However, it will now take many years to undo the widespread damage to transitioning households of having rescued African Bank.

That the heads of SA’s banks agreed to such a misinformed set of decisions, at an emergency weekend meeting convened by the central bank’s chief comrade, is indicative of how SA’s executives are not inclined to resist policy makers.

The extent to which misguided policies damage the economy is remarkable. For example in the low-income lending space, banning payroll deductions for high cost credit was illogical. It drove costs higher without achieving its objective, constraining the excessive proliferation of such loans.

This policy should have been turned on its head long ago with nearly all such loans being required to be repaid through payroll deduction – capped by a maximum debt deduction percentage. This would reduce loan losses, collection costs, admin costs, banking fees, and over-indebtedness. Reducing the costs and levels of over-indebtedness is, ultimately, in everyone’s interest.

Excessive household debt undermines transition opportunities. Consider current protests against student loans. The risk now is that the nation’s young people will respond ever more violently to the lack of opportunities.

Many grim years could pass before SA has a president as politically well positioned to drive fundamental shifts. Zuma should reshuffle his cabinet to make way for pro-business, pro-growth reformers who will drive necessarily bold policy shifts while overseeing a steady tamping of patronage.

The final essay in this series will sketch paths which would be possible with broad policy reforms.