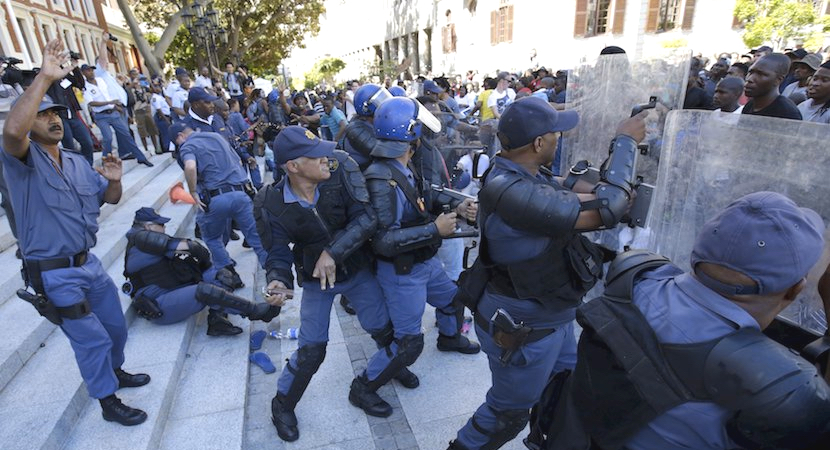 The #FeesMustFall saga has dragged on for well over a year, with no real solution in sight. President Jacob Zuma put together a commission on higher education and training, which in the most recent feedback, did not have much to add, with major concerns that a solution is nowhere near in sight, with 2017 around the corner. The Institute or Race Relations’ Sara Gon critiques an op-ed by Jane Duncan ‘Keep the spies out of snooping on protests‘ looking at policing around the protests. In Duncan’s editorial she asks if the State Security Agency should be involved in monitoring protests, especially violent ones? Gon agrees with some of Duncan’s statements, and says the SAPS is in crisis; under-trained, ill-trained and under-manned, particularly in public order policing, due to the sheer incompetence of Jackie Selebi. A very detailed analysis, with hints of a possible political agenda. – Stuart Lowman

In Op-ed: Keep the spies out of snooping on protests Daily Maverick 17 November 2016 Jane Duncan, Professor of Journalism at the University of Johannesburg raises a number of issues about the protests that are worth repeating and worth challenging.

Duncan’s views may be summarised as follows:

Duncan is largely correct about the state of the SSA and its involvement in intelligence gathering initially. However, despite the supposed inchoate nature of the protests, there may in fact be evidence that some of the protesters represent a threat to national security. The alleged inchoateness of the protests doesn’t, in and of itself, prove or disprove anything.

Intelligence should be gathered by the CID. It should be professional, accountable and free of political interference. However, right now the CID is a disgraced institution. Johan Burger, senior researcher in the Governance, Crime and Justice Division of the Institute for Security Studies says that crime intelligence is crucial if the police are to reduce organised crime.

Burger has described the CID as shambolic due to infighting, poor leadership and maladministration – the consequence of “inappropriate political interference”. There are approximately 8,000 CID officials but they are ineffective against organised crime. The state of the CID can be attributed to large-scale fraud and corruption, and the struggle for political control of it.

Its previous head, Mulangi Mphego resigned in 2009 after being accused of interfering with state witnesses in the corruption case against former National Commissioner Jackie Selebi.

Mphego’s successor, Richard Mdluli, was suspended in 2011 after being arrested on charges of murder, attempted murder, intimidation, kidnapping, assault and defeating the ends of justice. Later in 2011 Mdluli faced additional charges – fraud, corruption, theft and money laundering. However, in 2011/2012 there was an orchestrated attempt to reinstate Mdluli as investigations against him were halted and all the charges were withdrawn as a result of political interference.

Freedom Under Law succeeded in forcing the National Prosecuting Authority to reinstate criminal charges and disciplinary charges against Mdluli. The judge found that the decision to withdraw the charges, despite hard evidence, was unlawful and irrational. This decision led to the disbarring of Advocates Nomgcobo Jiba, the Deputy National Director of Public Prosecutions and Lawrence Mrwebi,Special Director of Public Prosecutions.

Intelligence gathering is severely compromised. Detectives and prosecutors need to investigate the protests thoroughly. But this is where our opinions diverge from Duncan’s.

No one is allowed to escalate a demand through destruction and violence. If protesting doesn’t work, another tactic must be devised. Opposition parties have to of this all the time. University students should have the intellectual resources not to resort to violent protest.

The disruption that occurred prior to the destruction and violence ensured that the demand was heard loud and clear. The protesters didn’t have to resort to criminal behaviour to get a response from the universities.

Violence and destruction began when it became apparent that the demand for free education could not be acceded to by university authorities. For this reason alone the protests were dysfunctional from the moment they began.

Duncan points out that in terms of the Gatherings Act the police have to negotiate with protesters. However, negotiation is a two-way process. The leaders, and in these protests no one has taken responsibility for leadership, have to present themselves to negotiate and then be willing to actually negotiate.

Disruption is usually by its nature unlawful and it requires compliance with rules to become lawful. Street protests in Johannesburg obtain permission to protest and agree with police how the protest will operate, where it will proceed, how many marshals there will be, and who will take responsibility of leadership.

Universities obtained interdicts in light of their experiences of the disruptive and unlawful events that had occurred over the previous 18 months. Legal action did not occur in a vacuum. Given the behaviour universities were trying to deal with, it is disingenuous to say that the terms of the interdicts were “over-broad”. Duncan does not elaborate on the ways in which the interdicts were over-broad and in what ways they inhibited legal protest.

In the absence of evidence there is nothing to substantiate Duncan’s claim that the university protests were over regulated; if anything they appear to have been largely under-regulated.

We’ve seen no evidence that any protests complied with the Gatherings Act. Even though universities are public institutions, the protesters took advantage of the relatively closed spaces to exercise their protests. When behaviour spiralled out of control the police and security were called in, and interdicts were sought. Only a handful of protesters are needed to break the law to see dramatically damaging results.

Some arrests may have been arbitrary, but Duncan blames the police for the behaviour triggered by the protesters. It was the other way round. The police were taunted and bated. Protestors tactically led police into areas where they became trapped. Rock throwing, forcefully disrupting lectures, threatening non-protesters and stealing goods from surrounding shops became standard behaviour. Police are legally obliged to respond to this behaviour.

Duncan says “All these factors harden protester attitudes, create an impression of an inherently unjust state and delegitimise its institutions. They create fertile ground for shifts in tactics away from peaceful ones to more violent ones.” If protesters’ attitudes harden as a result of action triggered by themselves, then they aren’t capable of taking responsibility for their actions. Their response is self-righteous and self-delusional.

Students who did not protest did not cite police behaviour as the reason they didn’t join the protesters. Most were relieved to have the presence of police on campuses as a safeguard against aggressive and threatening protesters.

While there were definitely instances of unprofessional behaviour by police and security, most students didn’t join the protests because the protestors’ behaviour was appalling. They disrupted lectures at a crucial time of the year, and the violence and destruction were repellant.

The bad faith almost entirely lay with the student leaders. Demands kept changing, student representation kept changing and meetings that were agreed to cancelled. These actions are antithetical to good faith negotiation.

Duncan’s view on an armed struggle notwithstanding, the Minister may have evidence of students attending military training. He may have information about academics who may have embarked on illegal action in support of the protests. Some academics may well have incited protestors. If this is the case, then they must be investigated. Academic content is not relevant per se. The same applies to NGOs.

The real problem is the Minister is highly tainted as a foot-soldier of Zuma’s. He doesn’t inspire confidence as competent or as a reliable source of solid intelligence. His alleged link to rhino poachers just exacerbates this situation.

Duncan is correct that the SSA’s excessive secrecy is self-defeating as it makes it impossible for the public to assess the quality of the agency’s intelligence. However, none of this negates the possibility that people are using the movement for political ends that are neither intended to be nor are executed in the interests of democracy.

We know only too well that the SAPS is in crisis; under-trained, ill-trained and under-manned, particularly in public order policing, due to the sheer incompetence of Jackie Selebi. The political manipulation of law enforcement agencies and their decimation as a result is a huge crisis in this country.