The jury is still out on whether or not a company works better under the stewardship of one or two CEOs. The percentage of single CEOs of JSE-listed companies may be a good benchmark. And the same is being said of regulating the financial services industry. It currently falls under one umbrella, the Financial Services Board, but Parliament is reviewing a bill to create a ‘Market Conduct’ and “Prudential” regulator, which was first introduced in 2013. The proposed structure would put the Reserve Bank as the ‘prudential’ regulator. Analysts are concerned this is merely complicating the process, and a cost with conservative estimates as R4.8 billion a year. And what’s the old adage, if it ain’t broke, don’t fix it. – Stuart Lowman

National Treasury recently released its Socio-Economic Impact Assessment (SEIA), a kind of cost-benefit analysis, on the Financial Sector Regulation Bill (FSR), the so-called “Twin Peaks” Bill currently before Parliament. Cabinet and MPs should reject this half-baked attempt outright and insist that it be returned whence it came, before SA has another self-imposed calamity visited upon it.

According to Cabinet policy, an SEIA must be carried out on all new proposed legislation.  This is to enable Parliamentarians and the public to form a proper objective understanding of the net benefits of all intended new legislation.  Few SEIA’s have been carried out in the past.  An exception was the Financial Advisory and Intermediary Services Act 37 of 2002 (FAIS) which was justified almost entirely on the basis of the savings that were meant to be realised from a decline in policy lapses that FAIS was imagined to engender. That decline never occurred. Since the intended net benefits of FAIS have never materialised, the legislation should long ago have been repealed. Instead, FAIS has acquired an enormously expensive life all of its own.  It now imposes direct deadweight costs on consumers conservatively estimated to be at least R600 million pa, to say nothing of the much greater indirect costs they must now bear.

No justification for the new structure provided

The central purpose of the FSR Bill is to rearrange the structure or architecture of South Africa’s financial services regulation. It plans to split the existing single, cohesive, un-fragmented, uncomplicated, easily understood regulatory system into two separate regulators or “Peaks”. Each regulator will not only be inscrutably intertwined with the another, but also with a plethora of other cabinet ministers, policy-setting bodies, councils, forums, committees, government departments and Acts of Parliament. (Try making head or tail of the accompanying illustration!)

Apparently, under Twin Peaks there is to be a “Prudential” regulator and a “Market Conduct” regulator. However, as everyone knows, these two regulatory functions already exist under one regulator, the Financial Services Board (FSB).

The SEIA is expected to demonstrate why the proposed dual regulatory architecture is superior to the existing one and superior to all other alternatives.  It does nothing of the kind. Vague, imprecise references are made to the “2008 global financial crisis”, to the need for “pro-active and intrusive” bureaucratic interventions, and to the need for a “more stable and inclusive” system.  Yet it neither explains why Twin Peaks will provide the answer, nor why the existing simpler, far less costly system is incapable of providing exactly the same outcomes or cures for perceived ills. An SEIA has not really been carried out at all and it looks very much like a repeat of the FAIS fiasco, except this time the failure will be many, many times more costly to the economy.

The second part of this specific justification is even more troubling. What it suggests is that Twin Peaks will give civil servants powers to force the financial sector to provide financial services to the poor. To those who understand that the sub-prime crisis (loans to people who could never be expected to repay them – actively encouraged, aided and abetted by government) caused the 2008 world financial crisis, it is this objective itself that has the potential to cause the next financial crisis.

A stable financial system and a fully inclusive financial system may well be mutually exclusive.  Moreover, it is doubtful whether a “more inclusive” financial sector is even a valid regulatory objective. It is by no means clear that it is prudent to have the financial sector press-ganged into providing services under the guise of “inclusivity” regulation. The financial sector will be damned if it does and damned if it does not.  After having been actively encouraged to grant loans to the poor and to disregard previous credit bureau records, banks are all too frequently condemned for “reckless” lending.   A regulatory objective of this kind could therefore prove destructive to the very “stability” it pretends to seek.

However, notwithstanding the stated intention of Twin Peaks seeking “stability” and “inclusivity”, the SEIA provides absolutely no evidence whatsoever of why Twin Peaks will provide it. The same misguided objectives can just as readily be pursued under the existing unified system.

No more than a cursory analysis is required to appreciate that the existing unified system is far superior to the proposed “twin peaks” dual regulator system. At present South Africa has a single regulator with the insurance and banking markets holistically regulated. This is indicated in the accompanying illustration.

The new system is infinitely more complex. It is immediately evident that the proposed Twin Peaks system is simply unworkable. The system contains a superfluity of committees, forums, councils and boards, some of which are called into being only if and when there is a crisis.  Professor Geoffrey Woods testified to the House of Lords Economic Affairs Committee into what went wrong in 2008 that on the matter of inter-government departmental committees, “On occasion the [tripartite system] functioned with jaw-dropping incompetence and chaos.”  The Twin Peaks system clearly introduces the same plethora of impractical and inept committees.

It is claimed that Twin Peaks is currently recognised as “international best practice”. This is simply not so. Britain and Australia have been experimenting with varying degrees of success. Holland has piloted a different version. Not a single other country has attempted it.

In addition, the SEIA provides no proper cost to benefit analysis as is required. Whilst costs are guessed at and immediately said to be incomplete, benefits have neither been enumerated nor in any way quantified. 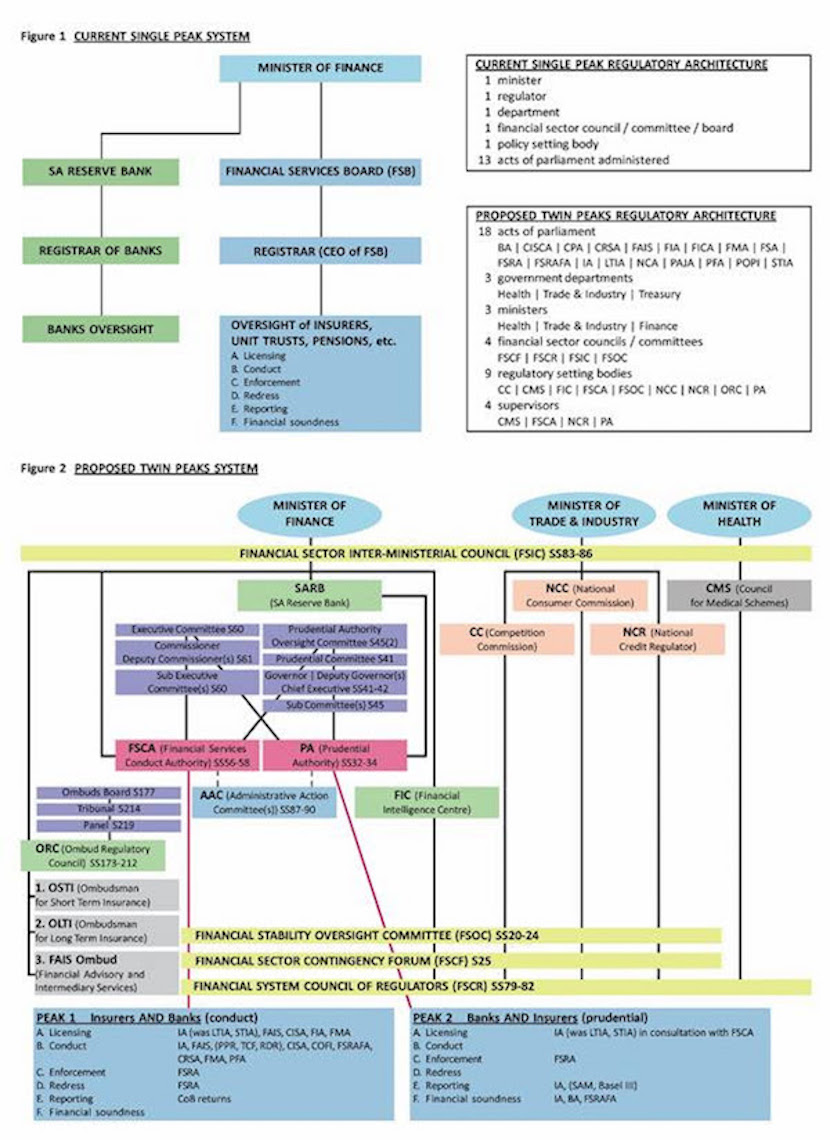 Violation of The Constitution: Rise of a unitary state with the state

Details of how the costly Twin Peaks dual regulator structure is to be funded will only be revealed to Parliament in a Bill that has yet to be placed before it. However, the goal is clear: The massive Twin Peaks bureaucracy will be funded by levies imposed by the bureaucrats themselves. In other words, the FSR Act and the additional Acts that are promised to follow, will empower civil servants to tax by decree without so much as a nod from Parliament. They are to be empowered to raise their own funds through regulatory levies and to pass their own “laws” euphemistically referred to as “legislative instruments”. They will have their own courts, (“Enforcement Committees”) will impose their own fines, and keep and spend the proceeds themselves. They are what have been referred to as a unitary state within the state, violating the Constitutional requirement of a proper separation of powers between legislature, executive and judiciary.

Reserve Bank as a general regulator

The FSR Bill makes the extraordinary proposition that the Reserve Bank should become the general prudential regulator of the entire financial market, including banks, insurers, collective investment schemes and the like. The functions of the South African Reserve Bank are precisely defined in the Constitution. To make the SARB a second general regulator under Twin Peaks would require a change to the Constitution. No such change has been proposed.  The existing system of banks being holistically regulated by the central bank is proven to be infinitely more sensible than lumbering the central bank with the prudential regulation of all non-banks, and then setting the FSB loose on all the banks with their untested “pro-active, pre-emptive, intrusive and inclusive” market conduct powers.

Parliament is well advised to reject the current Twin Peaks SEIA out of hand and to demand that it be properly done before South Africa has yet another government-induced calamity visited upon it.