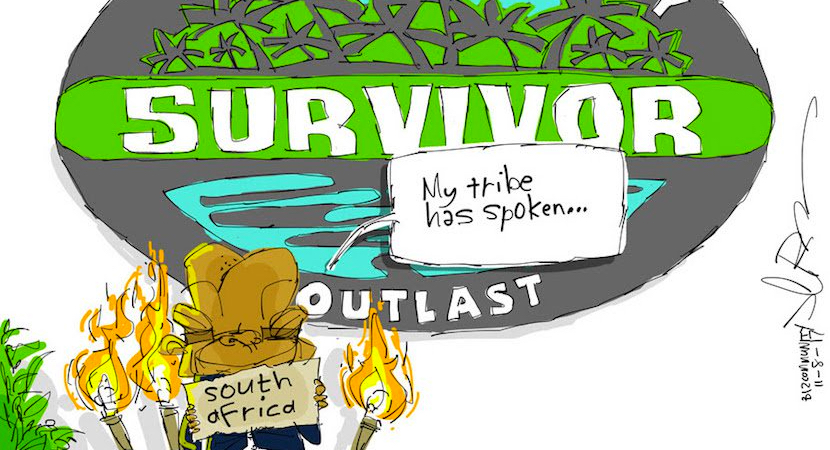 CAPE TOWN — Political analyst and futurist Daniel Silke gives it to us straight – Zuma has no legacy to save; only his skin and a hopefully comfortable future – preferably one in which he can die of natural causes in luxury by ensuring Zuptoids remain at the helm. That’s all it boils down to. Frightening actually. It brings to mind US President Donald Trump arrogantly holding open a card at a public gathering depicting an expletive preceding the words Climate Change. This is no different. You could put the same expletive in front of the words South Africa’s Future. I’d love to hear any academic or analyst providing logic and reason as to why it’s actually not so. Convincing us that Zuma is somehow misunderstood, the victim of circumstance and a media-pack feeding frenzy. He doesn’t look the part somehow. The body language, the wily strategizing, the reliance on populist charisma and racist rhetoric. The devil-take-the-hindmost 12 cabinet reshuffles. Only survival and the wielding of self-protecting post-presidential power remain. He could be remembered as the man who took the ANC down. That might even hurt a bit. – Chris Bateman

Put yourself in Jacob Zuma’s shoes. What would you do? How would you face the prospect of leaving the top job in the country? What can you do now to facilitate a pleasant and relatively stress-free retirement?

Notwithstanding issues surrounding ethics, accountability and testing the legal system, South Africa’s 4th President in the post-Apartheid era faces a very uncertain future. But, when you still hold most of the cards, you better play them. And that’s what JZ is doing.

Firstly, most Presidents would like to be remembered for a positive contribution to their country’s recent history. Most want a legacy. Most try to find just one real success in order to be praised in the history books for future generations. Not so with JZ.

Perhaps as a result of sheer circumstance but largely due to an 8-year struggle with the legal system and numerous scandals, there simply is no presidential legacy at all – unless you cynically count the embarrassments of the Spy Tapes, Rape trial, Nkandla and the Gupta saga as case studies to avoid in leadership generations to come.

The Zuma Presidency has largely contributed nothing to the advancement of South Africa and its peoples. With deficient management, poor (and ever-shifting) cabinet appointees and deep scandal, there’s nothing to look back on. Nothing at all.

For Jacob Zuma, his most positive contribution was as an ANC activist, detained in the 1960’s and later as a reconciler of warring factions in his native Natal Province. But that’s where the positive contributions cease. It’s all historic. Nothing to report as head of state.

So, when the legacy is thread-bare, you have nothing to lose. There’s nothing to preserve. Ultimately, you are left with a few limited options.

Secondly, with your future uncertain in terms of a protracted battle with the law over the ‘reinstated’ 783 corruption charges, you better make sure you have friends in high places – when you leave the highest office in the land.

So, these last few months will all be about encircling yourself with your friends and closest political confidants. For JZ, this process began two years ago with the appointment of Shaun Abrahams as National Director of Public Prosecutions. It continued with the selection of a new Public Protector in 2016. These were key appointments to protect JZ in the years to come.

When you have key friends in place, you can rest just a little better. But, there’s more you can do – there’s always more. With no legacy to protect, you can begin to exact revenge on your political enemies.

Those that are seen to be in your way need to be removed or isolated as best possible. Gordhan, Jonas and now Nzimande epitomise a revengeful President – more set on destabilising his own political party for narrow personal gains rather than acting as reconciler of a teetering Alliance.

Revenge is a very powerful emotion and a political aphrodisiac for those in power. Retribution rather than rapprochement has overtaken the Presidency this year. For JZ, his gambol was to oust those who stand in his way and maintain relationships only with those seen as doing his bidding.

Forget the Alliance, forget the Liberation history, it’s all about survival – and the broader ANC now seems expendable as a result.

Thirdly, with retirement (or ousting) looming, you need security – financial or otherwise. Keeping your friends happy in the pound seats of tenders, nefarious SOE deals and associated patronage-based schemes can bring security when the Union Buildings job is no longer there and the courts are knocking at your door.

Friends in high places will always owe you one. They can help you. They can provide a degree of financial protection for your future. When you have so damaged your brand in office, that may be all that’s left.

Had the legacy been real, a former President can enjoy considerable cachet. He (or she) can take up global positions, be seen on the world or regional stage, do much more than sit at home for the remainder of his days. In JZ’s case, he will need all the friends he can get – and using his Presidential power in the few short months left to him – will be critical to enable this.

So, a last push towards a nuclear power deal that will enrich connected elites (while potentially bankrupting the country) becomes more of a necessity despite its seeming legal obstacles.

Ultimately, for JZ, choosing his favored successor remains critical to his future and the record does show that his former wife gets the nod. But, JZ knows well that he needs a broader network of friends and confidants. He needs to keep the patronage-empire as well stoked-as possible. And, he needs to look at options other than NDZ just in case she fails to light the ANC conference delegates’ fire.

So the next three months are now in riskier political territory than ever before. By choosing to forge a path of pure survival in the post-Presidency era, JZ has risked the unity of his party. He has done this through a series of Zuma style ‘executive orders’ largely around controversial Cabinet placements and re-placements.

Ultimately, JZ wants to write the script and direct the movie entitled ‘The Exit Strategy”. He requires assurances or the use of legal maneuverings to secure his retirement free from persecution and prosecution. And, he seems willing to risk all in this quest.

The clear-and-present dangers therefore now carry a risk of complete disruption should events take a turn that threatens the President’s future. It is now not inconceivable that front-runner Cyril Ramaphosa might be removed from his position as Deputy President – a move designed to weaken his bid and take the wind-out-of-the-sails of those who argue that a Deputy should be the natural successor to the Presidency itself.

Furthermore, the increasingly tenuous legitimacy of the delegate count for December could further either delay or cause legal challenges before or after the event. Indeed, there is a risk that the ANC will face its own internal crisis of legitimacy.

South Africa should therefore brace itself for an extended period of political instability that is likely to stretch beyond December. The better news – if there is any – is that the ANC has a plethora of experienced, ideologically moderate and diplomatically savvy leaders who, working in tandem, can create a sentiment shift.

But, the ANC that emerges might be different from the one today. It might be balkanized and splintered. It might just be that the next 18 months up to and including the 2019 election is the slow realignment of politics that South Africa really needs. But, fasten your seatbelts for this one – it isn’t going be a walk in the park.