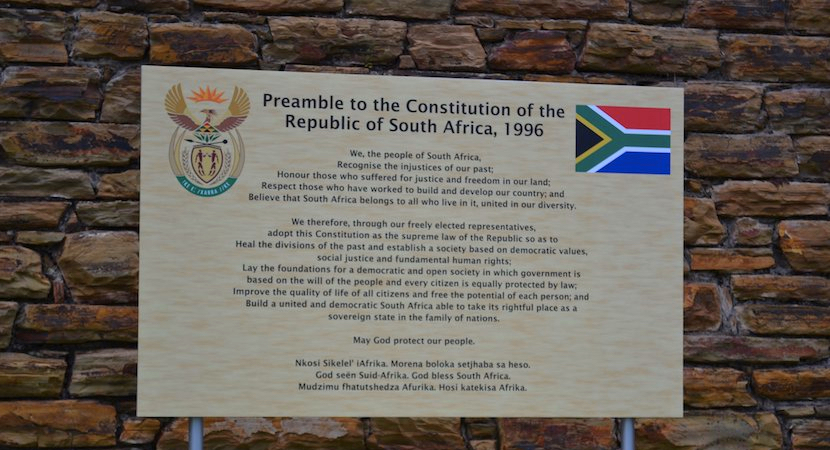 CAPE TOWN — Yes, President Ramaphosa was probably forced to concede the move to amend a Constitutional property clause to appease the Zuma-supporting faction in his party’s NEC. Politically, he had no choice. However, if the change renders the clause less vague, it could actually end up strengthening property rights, with owners – and the courts – having legal certainty. That’s the fascinating – and very rational – argument by the University of Johannesburg’s Political Studies Professor, Steven Friedman. Knowing what the rules are which decide whether one may keep one’s property will actually boost investor confidence, he argues. We’re so easily led to believe there’s a cast-iron guarantee of property rights in Section 25 of our Constitution when it’s actually far more wide-ranging, allowing the state to take measures to redress past racial discrimination while taking several democratic, humanitarian factors into account. This is where it needs tightening up to provide more certainty. Fiddling about drawing up lesser legislation which will in any case end up before the Constitutional Court, currently guided by vague parameters, is unhelpful. Friedman also reminds us just why unlimited rights to property is an ultimately impractical concept. – Chris Bateman

The South African government’s plan to change the constitution to mention land expropriation without compensation could, ironically, end up strengthening the property rights on which investment depends.

Pressure to change the Constitution to allow the government to expropriate land without compensation is currently the country’s most contentious issue. Supporters insist that the measure is essential to end racial land ownership patterns which continue to favour whites a quarter century after the end of apartheid. Critics insist that this will threaten property rights and choke off investment.

President Cyril Ramaphosa has now announced that the governing African National Congress will support a change to the constitution’s property clause. This was greeted with predictable anxiety among pro-business commentators. But their fear that the change will weaken property rights seems misplaced. To see why, we must look at what property rights are, what the constitution says and what Ramaphosa and the ANC leadership may have in mind.

There is no unlimited right to property anywhere. People who own homes cannot use them to make banned substances or to fire missiles at neighbours. People who own factories cannot use them to enslave labourers or to pump poisons into the air and water. If owners ignore these rules, they will be forced to give up some of their property. Some might even lose the property – think of restaurant owners whose businesses are closed down by health authorities to protect consumers.

None of this is inconsistent with a market economy. On the contrary, these rules are essential to markets. A good analogy is a set of traffic lights. They limit what car and truck owners can do with their property, but they are essential to keeping the property safe.

Read also: Steven Friedman: Land debate is about dignity, equality – not the constitution

The property rights of owners are, therefore, strong enough to allow them to invest with confidence when they know what the rules are which decide whether they keep their property.

Certainty is the key – not a blank cheque.

Section 25 of the South African Constitution, which is often held up by friends and foes as a cast-iron guarantee of property rights, is nothing of the sort. It does say the state can expropriate property only if it pays compensation and lists criteria which courts must take into account when deciding compensation. But clause (8) says:

No provision of this section may impede the state from taking legislative and other measures… to redress the results of past racial discrimination.

That’s if it complies with Section 36(1) which says the measure must be: reasonable and justifiable in an open and democratic society based on human dignity, equality and freedom.

So the Section does allow expropriation without compensation – but the wording spelling out when it is allowed is vague. If the government were to test this in court, different judges would inevitably come to different conclusions. This gives owners no certainty and so they don’t know whether their property is safe.

If the constitution is changed to make clear which property may be expropriated without compensation, property rights would be stronger because it would be clear to owners whether their property is safe and what to do to keep it that way.

This is what Ramaphosa and his party say they have in mind. His announcement did not say the constitution should be changed to allow expropriation without compensation – he said that it already does this. The aim, he said, was a clause which “outlines more clearly the conditions under which” land can be expropriated without compensation – in other words, to provide the clarity the current clause lacks.

If he makes good on his promise, the effect will be to strengthen property rights by making it much clearer when the state can take land without compensation. The wording of the clause will be crucial – if it’s too vague and allows the state too much latitude, it will not strengthen property rights. But it’s unlikely that it will seriously threaten these rights because this would place the property of every home-owning ANC voter at risk.

But, whatever the effect of this particular change, a look at why Ramaphosa made the announcement shows that the right to property in South Africa will be challenged until and unless inequality and economic exclusion are tackled far more vigorously than they are now.

His announcement this week sounded reluctant: he said that the current constitutional wording does allow expropriation without compensation and then insisted on the need to change it – there was no logical connection between the two.

This strongly suggests that he was forced to change position. Since the change came after a meeting called by the ANC’s National Executive Committee, it was surely pressure from this body which forced a change. This is confirmed by a report claiming that he shifted because the faction within the National Executive Committee which supports former president Jacob Zuma is using the land issue to embarrass him and his faction.

It’s easy to see why Ramaphosa and his allies had no answer to this. Inequality and economic exclusion remain deeply entrenched – the well-off are no longer all white but the poor are still almost all black.

Many black professionals and business people believe the economy is still controlled by the white minority. Given all this, no politician whose support base is overwhelmingly black can deny the need for change without facing the same ridicule as Congress of the People leader Mosiuoa Lekota, whose opposition to land expropriation has politically isolated him .

South African economic realities mean that rejecting economic change is simply not an option for politicians who seek a large black support base. It will be hard for them to insist on strong safeguards for property when many of their voters do not own any.

The obvious way to change this is to change these realities – to begin to negotiate economic changes which will open the mainstream economy to millions who now languish on its fringes while securing property rights for all.