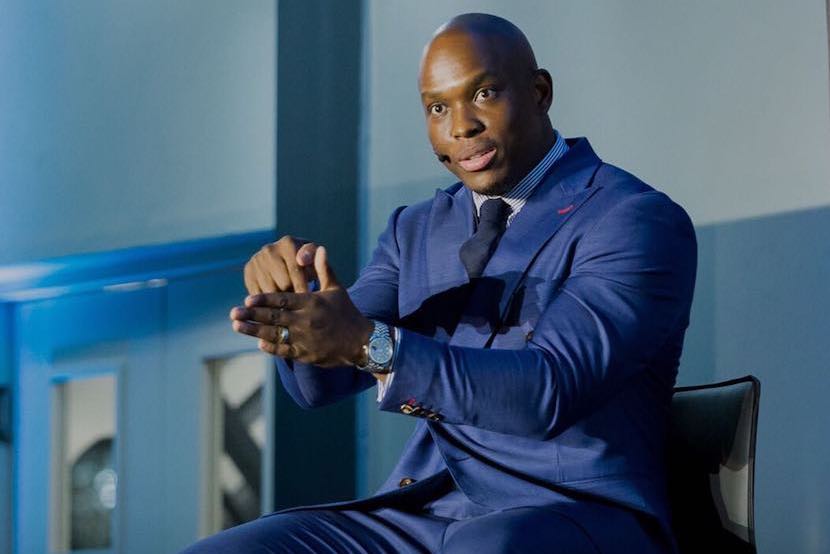 He is not afraid of speaking his mind and, you could say, as a professional public speaker, his mouth is his fortune. Vusi Thembekwayo, who has appeared on TV as a Dragon’s Den SA judge, once told Forbes he will do for talking what Muhammad Ali did for boxing. This past week Thembekwayo put his money where his mouth is and used the real victims of Covid-19 to swing a punch at the government in a colourfully worded Facebook live video that went viral and got #VusiforPresident trending on Twitter. – Fadia Salie

When Vusi Thembekwayo speaks, he usually gets heard. He is widely regarded as one of the most successful young entrepreneurs in Africa – he is a motivational speaker, CEO of Motiv8, founder of My Growth Fund, managing partner at Iconoclast, and well-known for his appearances on Dragon’s Den SA edition and and M-Net’s Shark Tank.

This past week his voice echoed the views of many South Africans when he took on government in a Facebook live video about the demise of small businesses.

Without dismissing that South Africa is clearly in a health crisis, Thembekwayo takes viewers on a tour in an empty office on the third floor in a Sandton office block, highlighting the economic destruction and the impact on people’s lives and livelihoods.

For him Covid-19 wasn’t the cause of death for businesses, Covid-19 was the coffin that businesses are being buried in. “The cause of death was a poorly-led economy, bad economic policy, poorly implemented economic policy, very poor leadership and most importantly funding agencies who have been completely lethargic in their response to small businesses out there looking for help and a banking sector that’s been so risk averse that you’d think it operates in Switzerland and not in South Africa,” he told eNCA.

His rant speaks of hurt, disappointment and anger and he lays the blame for the country’s economic perils squarely at the feet of the politicians. He says we can no longer blame apartheid for South Africa’s woes and just like investors are keeping him accountable for his company’s performance, it’s time for South Africans to keep politicians accountable for the state of the country.

Hey, everybody. So, I wanted to show you guys something, because I think for a lot of people this conversation about the economic impact of Covid is academic, right? Now, I want to show you guys something which I think would help me bring it home to you. Especially those of us who are saying that destroying the economy further is not going to help the health crisis that we’re in. We are clearly in a health crisis – there’s no doubt about that. But I don’t think locking down the economy is going to help us solve that health crisis.

So I want to show you on the third floor of where I have my offices in Sandton. I’m not going to share the company’s name, because I don’t have the authority or the consent to do so. There was a company that was here. Now, when I first moved in here, these guys were already here. They’d been here for years. And I think in here they had about 70 people. OK. I want to show you what their office looks like on the first of June. I am going to switch my camera around and I want you to see this.

These are people’s lives, livelihoods, salaries, incomes, pensions, providing for their families. All of it – gone. So, for the people who are standing on the sidelines of this happening – and this is particularly a message to those dumb people called fucking politicians who annoy the shit out of me. Right? To those people. I want to say to you: this is the economic impact of this thing you guys keep doing called lockdown, and now there are people going: ‘lock the economy down even further, because people are going to die’.

Where are you when these people are having to go home to their kids and tell them they’re not going to be able to take them to school anymore or buy groceries anymore or provide for their families anymore. Where are you now?

You all have been fucking around this country and this economy forever. That’s literally what they were doing. They were pissing it up. If they weren’t doing fucking corrupt deals, they were arguing in parliament about redundant shit that didn’t make any sense for anybody.

Now, look. Where are you know? Where are you now? Look at this view. Look at this. Look at this. All of these: hopes, dreams, ambitions. All of it. Gone. Gone. Millions in salaries. Even more millions in hopes, in dreams. Because what people don’t understand is the economic impact of shit. So, what that means is for every single person who had a job here, there was a home loan. There was a car loan. There was a student loan for kids to go to school. There was a credit card that the bank issued you a credit card for. There was building your home or renovating your home or building a home in the rural areas where your families lived. There were overseas holidays. This is how you build a fucking economy.

So, politicians? Where are you now? Quiet now, huh? Nothing to say now, huh? And all you do is you call conferences and you talk about the economy and people who are dying. This is the impact of your stupidity over the past twenty-six years. You did this! Because if you had built a country that was inclusive with an economy that was growing – we could’ve survived this shit.

Please make sure that you don’t watch this video sitting in front of your kids. I would apologise for my strong language, but you know what? For the first time, I think that strong language is exactly what’s needed. The problem is we live in a world today where – at the end of the day – people want to adjudicate how you say something, not the thing you’re saying. So if you’re worried about my language right now, maybe you’re part of the problem. Let’s forget language for a little bit. Let’s deal with substance, not form. Let’s deal with what things are, not how they look.

This is not racial. The people who worked here that I knew were my skin colour. So, don’t come to me about the white economy.

This is sad. I don’t think I’ve ever been sad to the point where I’m angry. I’m angry. I’m pissed. This is bad. I’ve been here a couple of times, I’ve never seen it this quiet… this dead. Millions in salaries gone. Just look at this. Look at this. Gone.

No public speeches now. No political wrangling now. No debating now. Just gone! If I hear one more person who works in a government department try to tell me that the economy should still be in lockdown, I’m going to slap you through Facebook. You’re saying that because you’re earning your salary. That’s why you’re saying it.

And all these people that work in these big, large corporations: the insurance companies, the banks – stop telling us it’s going to be OK. You’re saying that because you’re getting paid your full salary. You’re working from home on Teams and Slack. This is the real economy: small and medium sized businesses like this that provide for millions of South Africans every single day. And now those people will go without an income. Sooner or later, they’re going to go without food. And I hope that your conscience can sleep with the dumbness of your statements.