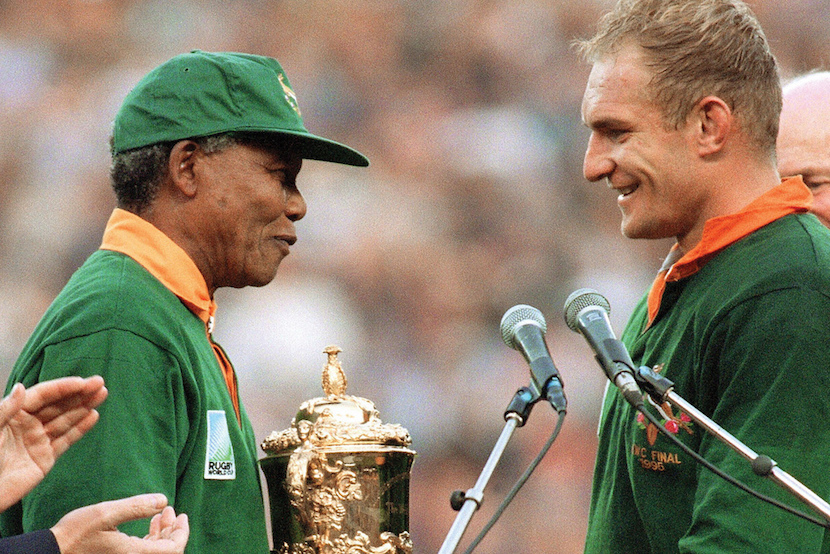 So you’ve just won the Rugby World Cup (literally hours ago) – but you haven’t just won it. You’ve lifted the trophy as captain, alongside the greatest statesman of the modern era, uniting a stadium, a country, a people, in one delighted roar of sporting triumph. How do you celebrate the 80 minutes that will come to define how the world knows you? Quite simple, really: you grab your mate Joel, who’s kicked the most famous drop-goal in rugby history, and you hitchhike to a local bar…

“There wasn’t a car to take us, and we wanted to go to Rattlesnakes, a diner where some of our friends were, so we hitchhiked outside the hotel,” recalls Francois Pienaar, with a smile that shows he’s fully aware just how ludicrous this sounds today. “A guy came past in a Jetta, and he couldn’t believe it when he saw us…”

It’s just one more extraordinary tale from a most extraordinary day. 25 years ago, the World Cup-winning skipper flagged down a passing car and hitched a ride to celebrate with a few mates after the final; contrast that with the 2019 Springboks sharing a beer with Prince Harry, before returning home to a national parade. It’s the (mostly) amateur era versus the professional one, and Pienaar’s time seems almost quaint in comparison – but while rugby players couldn’t retire on what they earnt in 1995, there was still plenty of reward, and important lessons in life beyond the game.

“We were amateurs back then. I had a trading business, so I used to train in the mornings, work in the afternoons, and at the weekend play in front of 50 000 people,” Pienaar explains of an era that prepared players for life after the game. “We had to equip ourselves for business, so the transition to life after rugby wasn’t that difficult. When the game did eventually turn professional, I went over to Saracens, where I was player-coach, and then CEO. So I learnt quite a bit about running a business.”

The skills acquired at the helm of Saracens proved an important platform on which to build his business career, first in banking, and then with his own ventures; but discussion on those adventures is held up temporarily by the allure of Bertus Basson – or more specifically, the food that the Stellenbosch maestro has sent to us both. And as ash butter melts into warm mosbolletjies that are even harder to resist than they are to spell, the World Cup-winning captain appears to have found his happy place.

“Sitting around a table with great food and meaningful conversation is what the Pienaar family is all about,” he says, with those meals together providing both the fulcrum of family engagement, and an unexpected windfall from the ravages of Corona. “My eldest son came back from the UK just before lockdown, and so we were all together. We would never have had this time together as a family ever again.”

Lockdown has meant that both of Pienaar’s sons have had their father’s wisdom to tap into at length, experience that’s traversed highs and lows – both of which have value to Pienaar. “When you win, you don’t always unpack the reasons why,” he explains of his belief that losing teaches you just as much as winning, if not more. “And that applies to business as well. The hardest thing you’ll experience is someone saying a flat no to you. But you have to think about why they said no, understand it, and try to turn that no into a yes.”

And even an iconic World Cup-winning captain knows what negative feedback is like, as he reflects on his biggest business triumph: the creation of the behemoth that is Varsity Cup sports. “There were a lot of naysayers when I first suggested it. But the youth is our future, and we didn’t have a space for them to express their talents on the sports field. Did I think it was going to be as successful as it has become? No! I was hoping it would, but I was so nervous in that first year. The semifinals and finals of the rugby went down to the wire, though, and the final was incredible, and after that, I knew it was going to work.”

The final in question saw my alma mater, the University of Cape Town, lose to Stellenbosch, and a painful sporting memory requires some solace, which is found in another of Basson’s dishes, even as Pienaar cheerfully reminds me that the food we’re eating comes from Stellenbosch. The dish in question is another example of a chef who thrives on simple ingredients and flavours coming together: light, elegant gnocchi (rather than the leaden bullets lesser chefs might inflict upon you), gently truffled, and sparingly dressed with an equally light cheese sauce that doesn’t drown out the lead ingredient. Add in some charcuterie from Richard Bosman, whose artisanal meats have gained cult status in South Africa, and the food is more than enough to sweep away the memory of rugby disappointment – and it gives my dining companion the opportunity to reflect on what this complex, maddening, wonderful country of ours means to him.

“We’ve travelled, we’ve been very fortunate, you and me. But whenever you come back, you’re reminded that the cuisine in our country is world class. The wines are world class. It’s just an amazing place. We’re innovative, we’re resilient. Our artists are world renowned. If you look at our business leaders, and the talent that’s gone out into the world, we’re a country that’s delivering some unique stuff.”

That delivery extends to the young leaders produced by his Make A Difference Leadership Foundation – “starting it is the best thing I think I’ve done in my life,” which sums up just how much the charity means to him – but despite his belief in both South Africa’s people and their attributes, and the potential of young leaders such as those he supports, the optimism that bubbles throughout time with Pienaar does check ever so slightly as he eyes up the future.

“We are frustrated with government at this moment in time. There are serious issues we need to tackle, and the corruption is unacceptable. You can’t imagine that in these times people are stealing when it comes to helping the poor. Those responsible need to be taken to book, because if there’s no consequence, why would they stop doing it? I am optimistic, but I would like to see some action on that front.

“Next year will be a tough year,” he adds. “I think the re-set will be in 2022. Things will start to normalise then, and the engines will start running again.”

If that is the case, there’s still a long, tough stretch ahead; some final inspiration from Francois Pienaar? “It’s about your intention, your attitude: is it to build, or to break?” It’s a simple but loaded question, for you know exactly what the skipper wants your intention to be – and just the sort of bon mot you’d expect from a man who’s led his team and country to a World Cup victory. Advice noted, captain – building South Africa back up it will be.