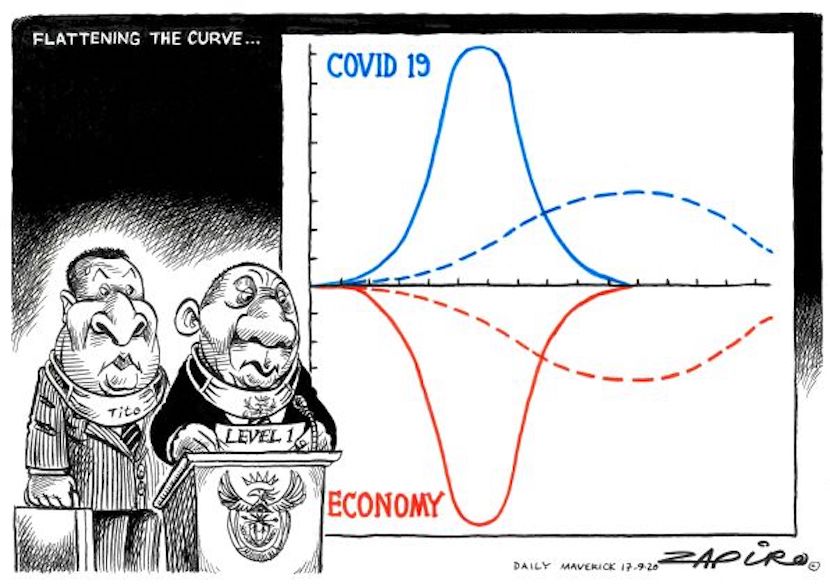 BizNews community members have been reminded in a number of hard-hitting interviews this week that the South African economy is in a dark place, with little confidence the ‘New Deal’ style economic recovery plan will change that. At the Rational Radio webinar on Monday, mining expert Peter Major told BizNews founder Alec Hogg that South Africa is the least attractive country for investors, although its vast mineral resources should make it highly appealing. Major cited red tape and other disincentives. On Tuesday, analyst Chris Hart signalled his pessimism about SA in an in-depth interview on The Alec Hogg Show, though he has no intention of emigrating. Today, senior journalist Jonathan Katzenellenbogen sets out the reasons why it seems unlikely the New Deal can fix SA, although the plan boosted the US economy after the Great Depression. His in-dept analysis was first published on the IRR’s Daily Friend website. – Jackie Cameron

Ramaphosa’s plan is big and bold, and, like the New Deal, aims at relief and recovery mainly through a new infrastructure-building programme. Like the New Deal, there is also a massive public employment component to the recovery plan in sectors ranging from public works and education to the arts.

Unlike with the New Deal, there is little of real substance in the plan about reform. As an official from the credit rating agency, Standard and Poor’s, told Business Day: ‘It seems to be more of a spending plan than a reform plan.’

And, unlike the New Deal, the Recovery Plan is about big spending that risks catapulting the country deeper into a debt trap and financial crisis. The New Deal barely raised US debt as a percentage of GDP and would have lost political support had it not been fiscally conservative.

Key parts of the New Deal were reforms to reduce the chances of bank failures and to better regulate stock trading, and new forms of protection for labour. There is nothing in the big African National Congress (ANC) plan about the sort of growth-enhancing reforms that the IMF and credit rating agencies would like to see. There are no reforms to change South Africa’s inflexible job-killing labour market or for privatisation or liquidation of state-owned enterprises (which require endless bailouts) or a restoration of fiscal discipline.

The Reconstruction and Recovery Plan is an attempt to dance around the need for reforms with state-led investment and job creation to stimulate growth. It avoids politically tough decisions on policy changes that are key to growth but would mean the ANC would run up against its union allies.

Speeding up of SA’s economic woes

And that is the reason it is likely to lead to a speeding-up of South Africa’s economic woes. How the plan’s financing requirements can be accommodated in view of the Treasury’s aim to peak public debt at 87 percent of GDP in the 2023/4 fiscal year is the mystery that must be answered next week. That is when Finance Minister Tito Mboweni will deliver the Medium-Term Budget Policy Statement and outline plans for the next three years. This was delayed by a week, probably to allow the Treasury to try to solve the insoluble puzzle thrown up by the big plan.

In addition to the R500bn Covid-19 emergency package, there are now the big new stimulus plans from the Reconstruction and Recovery Plan. That includes R100bn over ten years to finance the Infrastructure Fund, another R100bn over the next three years to provide public and social employment, R6bn for a three-month extension of the Covid-19 grant, and a further R10.4bn bailout for SAA.

While the IMF and World Bank have said it is best for governments to boost spending to deal with the Covid-19 nightmare, South Africa is simply not in a position to follow this advice. Besides, the IMF has said the country must deal with its profligate spending in the short term. As a percentage of GDP, South Africa spends almost as much as advanced industrial countries like the US and Canada.

Under the plan, the country will aim to spend R1 trillion in total in infrastructure spending over 10 years. With the years of neglect in roads, railways and bridges, South Africa certainly needs new infrastructure. Massive infrastructure-building programmes tend to develop common problems. First, there are inevitably project management problems, something that has been experienced by Eskom at its mega coal-fired plants of Kusile and Medupi, which were meant to be fully on stream some years ago. Skills shortages make for delays and cost escalation and, over time, the marginal return on projects declines, often due to poor project selection.

Then there is the problem of financing. South Africa has long experienced the problem of users not wanting or willing to pay for water and electricity. That means these projects are unlikely to be self-financing. And then there is the issue of maintenance of infrastructure. Ultimately it all depends on management and the political environment whether projects turn out to be growth-enhancing, or white elephants.

There is a definite role for expanded public works programmes in the depressed Covid-19 environment. Mass employment for civil and public works could offer immediate relief for many, but a public works programme is limited by state resources. If the private sector were able to pay the minimum wage rate of R11.42 an hour, as paid by the Expanded Public Works Programme, many more sustainable jobs could be created without a burden to the taxpayer.

The R100bn jobs programme under the Ramaphosa plan only lasts for three years, which raises the question of what happens to the 800,000 jobs after this period. As a political force might well have been created by those benefiting from this mass employment initiative, it is likely that the state may have to ultimately make an open-ended financial commitment to the programme. But the ANC would prefer a limited public works programme to allowing the private sector to pay what the government pays.

Part of the reason for the success of the New Deal in the 1930s was that it did not drive the country off a fiscal cliff and worsen the hardships of the Depression.

One of the first measures of the New Deal was the Economy Act which aimed to gain the support of many key southern Democrats who had a strong belief in balanced budgets. The Economy Act brought in cuts of 15 percent to the salaries of civil servants and the pensions of war veterans. This was all before John Maynard Keynes’ General Theory, which introduced the idea of government spending to promote growth.

In 1929, the year of the stock market crash, the US deficit was 3 percent of GDP and, despite a three-fold rise in government spending, it averaged 3.7 percent of GDP from 1933 to 1939. It was only with America’s entry into the Second World War that the deficit as a share of GDP sharply rose, reaching 40 percent of GDP in 1944.  In light of many South Africa private sector workers enduring layoffs or pay cuts, this is a lesson that the recovery plan may well have overlooked.

There is much debate to this day over the extent to which the New Deal helped the US to emerge from the Depression. It was only America’s entry into the Second World War that allowed full employment, due to war production raising the demand for workers and the exit of others for military service. Had the US been running unsustainable deficits in the early 1930s, there would have been no scope for a New Deal, and indeed the later war effort would have been hampered.

The lessons from the New Deal for South Africa in its current predicament are not so obvious.