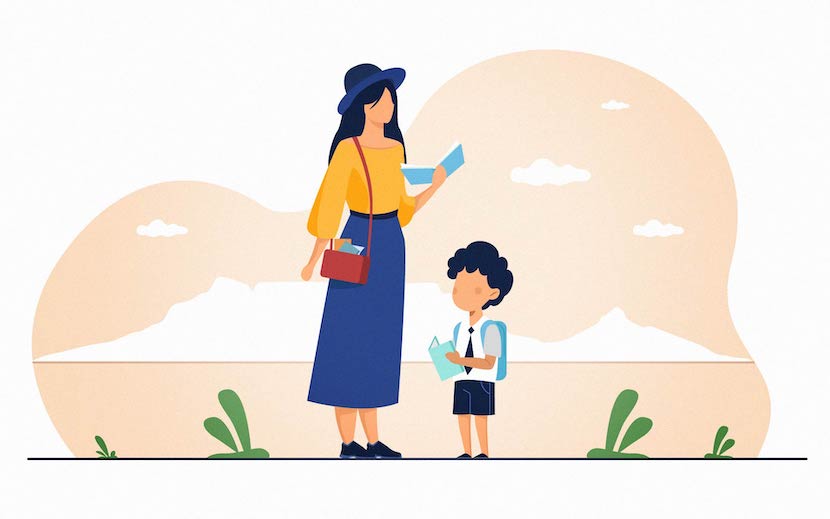 Being a step-mother, or smom, as the cool kids call it, means having to adapt quickly to change and chaos.

My stepson moved to Cape Town last year, in March. Nobody saw it coming.

We had decided that the school holiday was too short to warrant flying him down from Johannesburg.

Not to mention, his dad runs a conference every March and would be popping up country during that week.

For reasons not relevant to this story, nor mine to share, C arrived in Cape Town with two days’ notice. Initially, I don’t think anyone wanted to acknowledge that this was not a quick visit.

We knew that it was a permanent move, but still, we hung in a type of limbo.

I’ve never dated a dad before. Already, in my role as “dad’s girlfriend”, I’d had to face up to my own insecurities, jealousy, and lack of patience.

I wish I could say I slid into the role of full-time stepmom gracefully, but obviously I did not. Don’t get me wrong, I loved this child fiercely from the moment I laid eyes on him, accidentally, in Woolworths.

I am a woman who struggles to share chocolate, and now I can’t even sit next to my boyfriend at the movies?

Even if this was a short visit, we had not arranged leave from work, holiday activities, or a child minder. Cue my parents being pulled in to help.

My poor dad, newly retired after 40 years in education, was thrust head-first into the world of Fortnite.

It quickly became apparent that C was moving in with us, at least till the end of the year. We urgently needed to get him into a local school.

This was no small feat, given that it was school holidays, and we were one term into the school year. I contacted pretty much every school within a reasonable distance.

Unsurprisingly all the government schools were full, and we didn’t have time to be on a waiting list. We found three private schools that could take on a pupil at short notice.

Fortunately, the less expensive option was convenient and well-established. C was invited to attend classes for two days to check that school and pupil were a good fit. Awesome, everyone was happy.

He was set to start full-time classes after the Easter weekend.

Read also: The pandemic ruined my wedding plans, but it was just the jolt I needed

In the meantime, I was finding it near impossible to balance my new role as a parent and a full-time job.

My partner was in the middle of running a conference in two cities. He had an overseas work trip planned within weeks of the move.

I’d been questioning my career choice for a while and now faced a drastic change in my priorities. As a family, we decided we could manage on one salary. I gave my notice for the end of April. This was a big deal for me, having given 15 years of my life to the company.

Just for good measure, my partner proposed on the Good Friday. C also went down on one knee and asked me to be his “smom” – the cooler version of step-mother.

Later that same day I sat and covered a mountain of school books. All the while stealing glances at my new ring and muttering about this all being worth it.

That same weekend we went off to get C his school uniform. Because no stage of this process could be without stress, it turned out that the school was on the cusp of changing to a new uniform.

It was not possible for us to acquire the correct uniform in a retail store. So he started at his new school in a plain golfer and the wrong shoes.

He didn’t know a stitch of Afrikaans. Because we’d joined the school in the second term, no one put us on the weekly email that is the holy grail for parents. We discovered this months later.

I made friends with a mom from C’s class and I muddled along.

As I’ve mentioned, I’m no saint when it comes to patience and sharing. My need to control everyone and everything was laughable.

In those first few months I joked about being on maternity leave. It wasn’t far from the truth. I needed the time to adapt and learn.

I’m fortunate that I could step away from full time work. I reached out to other moms as I navigated my way into parenthood.

They assured me that my frustrations were normal for a new mom – the difference being that my “baby” was capable of storming off and slamming doors when I got it wrong.

We thought we had got into a groove this year. No longer the “new parents”, we were getting all the emails and schedules. Then the pandemic happened. All I can say is I’m glad that home-schooling has come to an end in our house.

Being asked to step-up to a parental role is not something I take lightly. I’ve come to realise that all the good things in life come with their own level of mess, be it grass-stains, melted ice-cream, or sandy toes.

If chaos and change equals getting to hang out with the best tween in the world every day, sign me up.