Energy expert Ted Blom has a view of Eskom which few of us will ever see. He was hired to rebuild Eskom’s coal roadmap. During his research Blom noted that Eskom was facing what the Fossil Fuel Foundation called a ‘coal cliff’. In a 2018 interview with BizNews, Blom said Eskom had, once upon a time, announced that it would open 40 new coal mines. That didn’t happen and instead the state owned power utility decided to open three new power stations. Medupi and Kusile have been plagued by breakdowns due to lapses in maintenance at the plants. Neither facility currently functions at full capacity. As for the abandoned coal mining plan, those chickens have also come home to roost. Eskom says breakdowns at its major units coincide with a lack of fuel at open cycle gas turbine and pumped fuel stations. MyBroadBand speaks to Ted Blom about the true extent of Eskom’s power generation shortfall and what it means for load shedding in 2021. – Melani Nathan

South Africans should brace themselves for the worst year of load-shedding yet in 2021, with Stage 8 being a possibility before the end of winter.

This is the view of power and mining expert Ted Blom, who spoke to the Free Market Foundation’s Chris Hattingh during the latest episode of the Free Marketeers podcast.

Blom’s warning comes after  Eskom announced on Sunday it would have to continue with Stage 2 load-shedding. Blom subsequently provided his analysis of the utility’s situation and a prognosis for load-shedding in the next year.

Blom claimed that Eskom was understating the amount of power it was actually shedding from the national grid.

This, he said, is because Eskom already interrupts 2,000MW of supply to its big customers when it announces load-shedding for the general public.

“When Eskom says we are having Stage 1 load-shedding or shedding 1,000MW, to the economy it is in fact a 3,000MW shortage,” Blom said.

While Eskom has over the past week said it is shedding at Stage 2, Blom said it has consistently been over 2,000MW short, which technically means Stage 3 is in effect.

“So in actual fact, if you add the numbers together, it’s the 2,000MW from the interruptible chaps, plus 2,000MW from the public, plus the residual for which they are over 2,000MW,” Blom stated.

“That in fact makes it about Stage 5 load-shedding if Eskom was more transparent and honest in its dealings with the public,” he said.

Blom said that Eskom is capable of handling about 11,000MW of shortages before having to implement load-shedding.

However, the utility’s outlook for the next three months in its latest system status report showed a near-consistent unavailability of 20,000MW or more when taking both planned maintenance work and unplanned outages into account.

This would mean that the deficit over the next three months would hover around 9,000MW.

“Therefore I feel quite comfortable saying that I will not be surprised that between now and the end of winter we will experience Stage 6 load-shedding, pretty much for certain, and even Stage 8 or above is a possibility.”

Based on Eskom’s own forecasts, 2021 is going to be the worst year of load-shedding on record, Blom stated.

“The outlook on Eskom’s own data is worse than last year. If it materialises it will be the worst in the history of Eskom,” Blom said.

This would follow load-shedding increasing both in terms of the number of days and MWh shed over the last few years – reaching 52 days and over 1,260,000MWh in 2020.

What happens at Stage 8

Stage 8 load-shedding is implemented when 8,000MW needs to be shed from the national grid in order to prevent a total collapse of the system.

During stage 8, consumers can expect much more frequent power cuts, to be without electricity for 48 hours over four days, or 50% of the time.

The worst level of load-shedding previously experienced in South Africa was Stage 6, which was implemented in December 2019 after a technical problem at Medupi Power Station.

At the time, Eskom needed to shed 6,000MW, which meant that around 40% of its capacity had been unavailable.

The infographic below provides more details regarding Eskom’s load-shedding stages. 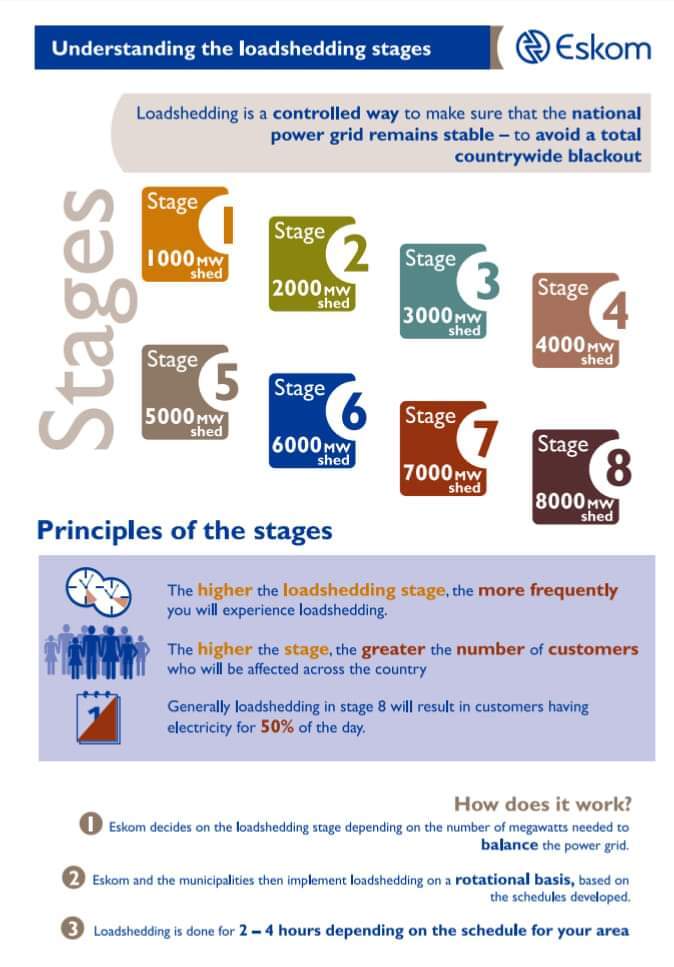 Eskom has told MyBroadband that while it endeavours to only load shed at Stage 4 or below and only when truly necessary, higher stages of load shedding could be required.

This would be the case if there are numerous, simultaneous breakdowns of generating units and depleted fuel levels at the OCGT (open cycle gas turbines) and pumped storage power stations.

“In the planning scenarios considered, at an unplanned unavailability of up to 14,000 MW of capacity, up to Stage 3 load-shedding is possible,” Eskom said.

“However, if this coincides with depleted fuel at pumped storage and OCGT power stations, higher stages of load-shedding are possible,” it added.