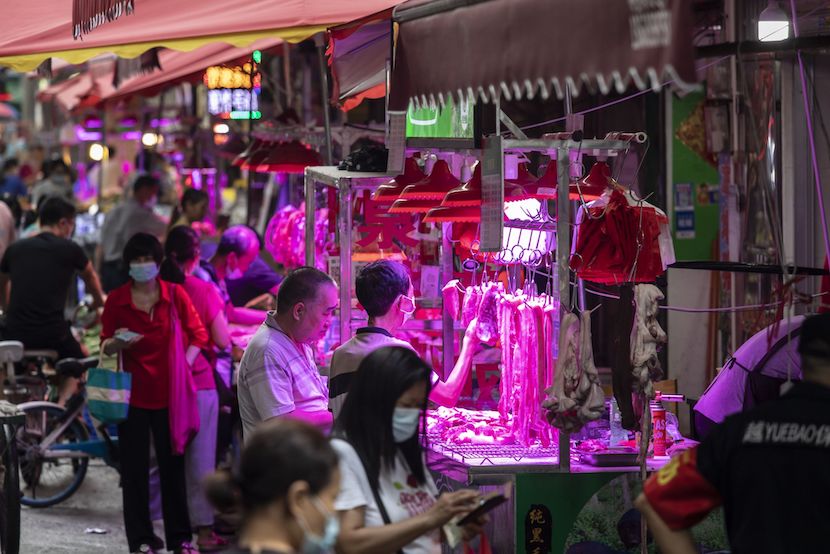 A new study has provided critical evidence that Covid-19 may have spread naturally, from animals to humans. The Wall Street Journal reports that the study, which has been published in the Scientific Reports journal, has showed that nearly 50,000 wild animals were sold in Wuhan in “the two and a half years before the first confirmed Covid-19 cluster was found there.” All sorts of wild animals (including 31 protected species) were killed on site and stored in unhygienic conditions – perfect for the virus to hop species. The study also sheds light on the highly illegal wildlife trade in Wuhan, with no checks conducted on the health or origins of the animals. Chinese officials didn’t comment on the report. In recent weeks, health officials from China have suggested that Covid-19 did not originate from China “and urged the WHO to investigate potential early cases in other countries.” The study’s release comes in the middle of further investigation into another hypothesis on the origins of Covid-19, that it may have been leaked from a lab in Wuhan. This theory has also been denied by China. – Jarryd Neves

More than 47,000 wild animals were sold in the Chinese city of Wuhan in the two and a half years before the first confirmed Covid-19 cluster was found there, a new study showed, providing critical new evidence that the coronavirus could have spread naturally from animals to humans.

The study, published in the open-access journal Scientific Reports, revealed that the wild animals, including 31 protected species, were often butchered on site in markets, and stored in the kinds of cramped, unhygienic conditions that can allow viruses to hop species.

Those animals included at least four species that scientists say can carry the Covid-19 virus—civets, mink, badgers and raccoon dogs—according to the study by researchers from the China West Normal University, the University of Oxford and Canada’s University of British Columbia.

The study published on Monday also shows, for the first time, that much of the wildlife trade in Wuhan was illegal, with no enforcement of mandatory checks on the health and origins of animals sold.

“Almost all animals were sold alive, caged, stacked and in poor condition,” the paper said. “Most stores offered butchering services, done on site, with considerable implications for food hygiene and animal welfare.”

Such is the extent of the findings that some scientists, including the head of a World Health Organization-led team investigating Covid-19’s origins, questioned why the data—which was gathered between May 2017 and November 2019—hadn’t been shared earlier.

Two of the authors told The Wall Street Journal they had been unable to share their findings with the WHO-led team because the paper had been undergoing peer review for several months. One said it had been rejected by several other journals, suggesting that it was seen as a “hot potato.”

The WHO-led team visited Wuhan early this year and inspected places including the Huanan food market, around which many of the earliest Covid-19 cases were found in December 2019, prompting Chinese authorities to announce that the likely source was wild meat sold there.

The team said in March it had found no proof of live mammals being sold at that market—though it noted some reports they had been—and quoted market authorities saying all wildlife traded there was legal. It also visited Wuhan’s Baishazhou market and said it found no evidence of wildlife being sold there.

It was based on a survey of 17 shops at four different markets in Wuhan—including Huanan and Baishazhou—conducted as part of a study on the spread of a tick-borne disease among animals.

It covered seven vendors at Huanan—featuring photos from there of live bamboo rats, hedgehogs, marmots, raccoon dogs and hog badgers—as well as two shops in Baishazhou, which supplies goods to many vendors in Wuhan, including at Huanan.

The 17 shops sold a combined total of 47,381 wild animals from 38 different species, all but seven of which are protected under Chinese law, the paper said. But none sold bats or pangolins—scaly ant-eating mammals that the WHO-led team has identified as potential intermediate hosts.

China’s National Health Commission and Wuhan city government didn’t respond to requests for comment. Chinese authorities have in recent weeks suggested the virus didn’t originate in China and urged the WHO to investigate potential early cases in other countries.

The new paper “confirms what was suspected,” said Peter Ben Embarek, a food safety specialist heading the WHO-led team. “Not only farmed wild animals products were on sale but also live animals.”

Importantly, however, it didn’t show whether such animals were still present in November 2019 when a spillover likely occurred, he added, or contain granular details about the animals in each market. “Would be nice to see the figures by month but I am sure the authors have the info,” he said. “I don’t know why the info was not shared before.”

Zhao-min Zhou, a researcher at China West Normal University who co-wrote the paper, said that it wasn’t shared with the WHO-led team earlier because it was still waiting to be peer reviewed.

“We were unwilling to disclose it to any other parties” until peer reviewers considered it ready, he said.

“This seemed like a globally important data set and I thought someone would want to snap it up and make it available,” Dr. Newman said.

“I kept getting these rejection letters—they all said it’s very niche, nobody would see global relevance to this data. None of them were very keen at all. I don’t know if they saw it as a hot potato maybe.” He said his Chinese co-authors weren’t permitted to publish on a preprint server—which doesn’t require peer review.

A spokeswoman for Scientific Reports said, “The time between the submission of a paper to its acceptance can vary significantly, as it incorporates editorial evaluation, securing peer reviewers and one or more rounds of peer review and author revisions, which can be a lengthy process. Once the process was complete and the paper accepted by the journal for publication, the article was published within two weeks.”

The paper’s release comes amid escalating calls for a fuller examination of an alternative hypothesis on the origins of the virus—repeatedly denied by China—that it might have spilled from a laboratory in Wuhan that was experimenting with coronaviruses found in bats.

Although most scientists still consider it more likely that the virus spread naturally from animals to humans, none have been able so far to find an ancestor to the virus or identify the species that might have acted as an intermediary host.

The paper provides among the strongest clues yet.

“It is an actual smoking gun,” said Robert Garry, a virologist at Tulane University School of Medicine, in New Orleans, who wasn’t involved in the study but is among scientists who have consistently rejected the lab hypothesis.

“This report clearly places [SARS-CoV-2]-susceptible animals smack in the middle of Wuhan,” he said, describing a list of mammals included in the study as a “virtual Who’s Who” of creatures that can carry the Covid-19 virus.

He also suggested that the data wasn’t included in the WHO-led team’s report because the study found that the 17 shops were selling wildlife illegally. Other scientists questioned why data that helped buttress the case for a live animal spillover in a market wasn’t shared far earlier.

“Seeing that these animals were definitely there and these conditions is useful with respect to establishing that plausibility,” said Aris Katzourakis, an Oxford University professor of viral evolution. “I don’t see why statements of fact about the presence of particular animals in the market should have to wait for peer review. There may well be politics going on here though.”

China has long banned the trade in certain wildlife, such as endangered species, but permitted the licensed breeding and trade of other wild animals that are used as food or in traditional medicine, as long as sanitary checks are passed.

The paper said that 13 of the stores surveyed posted the necessary permits from the Wuhan Forestry Bureau allowing them to sell wild animals, such as pheasant, Siamese crocodile, Indian peafowl and Amur hedgehogs.

However, none of them posted the requisite certificates indicating the origin of the animals or that they had been quarantined to ensure that they were free of disease, the paper added.

“So all wildlife trade was fundamentally illegal,” it said.

Approximately 30% of animals from six species inspected had suffered wounds from gunshots or traps, implying they were caught illegally, the Scientific Reports paper said. Those species included badgers and raccoon dogs, both of which can carry the Covid-19 virus.

“The WHO reports that market authorities claimed all live and frozen animals sold in the Huanan market were acquired from farms officially licensed for breeding and quarantine, and as such no illegal wildlife trade was identified,” the paper said.

“In reality, however, because China has no regulatory authority regulating animal trading conducted by small-scale vendors or individuals it is impossible to make this determination.”

It praised Chinese authorities for measures including a permanent ban in February last year on trading most terrestrial wild animals and consuming them as food.

But it said further measures were needed to clarify which species couldn’t be traded legally and to change attitudes among consumers of wildlife products in China.

“Adopting these more responsible practices has the potential to save countless lives in the future,” it said.

Appeared in the June 9, 2021, print edition as ‘Wildlife Sold in Wuhan Before Covid.’