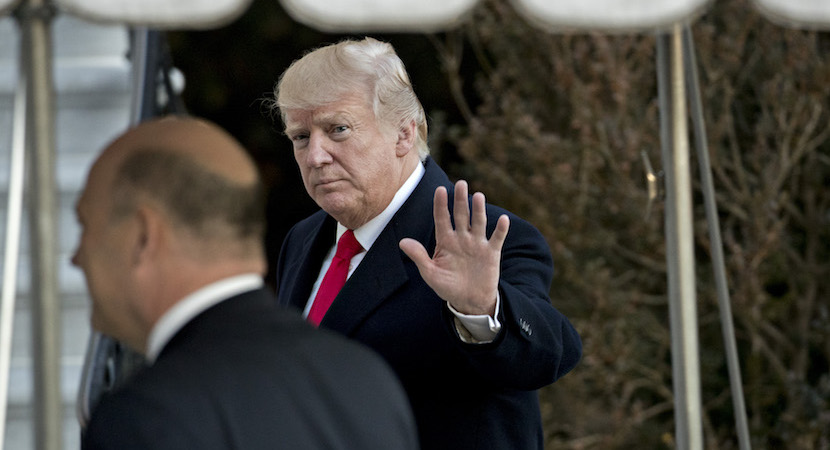 Former President of the United States recently wrote a piece published in The Wall Street Journal explaining why he has decided to take ‘Big Tech’ to court. Earlier in the year, Twitter banned Trump from its platform “due to the risk of further incitement of violence” from his account. His reasoning behind the lawsuit is that, in his view, these companies are “manipulating” or “controlling” political debate. “This flagrant attack on free speech is doing terrible damage to our country. That is why in conjunction with the America First Policy Institute, I filed class-action lawsuits to force Big Tech to stop censoring the American people,” wrote the 45th president of the United States. Below, Vivek Ramaswamy says that Donald Trump can possibly win his lawsuit against Big Tech, noting that these companies do, in fact, censor on behalf of government. “Mr. Trump’s complaint omits important precedents, facts and claims for relief, but there’s a strong case to be made that social-media censorship violates the Constitution. If his lawyers do better in court than in their initial filing, Mr. Trump can win.” Ramaswamy goes on to cite legal precedent “for calling it state action.” – Jarryd Neves

Trump Can Win His Case Against Tech Giants

The companies censor on the government’s behalf. There’s ample precedent for calling it state action.

By Vivek Ramaswamy of The Wall Street Journal

The media has panned Donald Trump’s First Amendment lawsuits against Facebook, Twitter and YouTube: “sure to fail,” “as stupid as you’d think,” “ridiculous.” Mr. Trump’s complaint omits important precedents, facts and claims for relief, but there’s a strong case to be made that social-media censorship violates the Constitution. If his lawyers do better in court than in their initial filing, Mr. Trump can win.

It’s true that the First Amendment ordinarily applies to the government rather than private companies. But the central claim in Mr. Trump’s class-action lawsuit—that the defendants should be treated as state actors and are bound by the First Amendment when they engage in selective political censorship—has precedent to back it up. Their censorship constitutes state action because the government granted them immunity from legal liability, threatened to punish them if they allow disfavored speech, and colluded with them in choosing targets for censorship.

The Supreme Court held in Norwood v. Harrison (1973) that the government “may not induce, encourage, or promote private persons to accomplish what it is constitutionally forbidden to accomplish.” As Jed Rubenfeld and I argued in these pages in January, that’s what Congress did by passing Section 230(c)(2) of the 1996 Communications Decency Act, which permits tech companies to censor constitutionally protected speech and immunizes them from state liability if they do so.

Prominent congressional Democrats have also issued severe, explicit and repeated threats to retaliate against social-media giants if they fail to remove “hate speech” and “misinformation” that the government can’t directly censor under the Constitution. These threats have worked.

In an October 2020 hearing, as Mr. Trump’s lawsuits note, Sen. Richard Blumenthal of Connecticut told CEOs Jack Dorsey of Twitter and Mark Zuckerberg of Facebook: “The president has used this microphone to spread vicious falsehoods and apparent attempt to overturn the will of the voters.” In the same hearing, he threatened “a breakup of the tech giants” and “Section 230 reform,” including “possible repeal.” Mr. Zuckerberg has called such regulations an “existential threat” to Facebook. In January both sites banned Mr. Trump.

The Supreme Court held in Bantam Books v. Sullivan (1963) that the First Amendment was violated when a private bookstore stopped selling works after officials deemed them “objectionable” and threatened prosecution. In Carlin Communications v. Mountain States Telephone & Telegraph Co. (1987), the Ninth Circuit Court of Appeals found that a telephone company was acting as a state agent when it acceded to government threats to stop carrying offensive content on paid dial-in lines.

Even if Messrs. Zuckerberg and Dorsey didn’t fear these government threats, the Second Circuit held in Hammerhead Enterprises v. Brezenoff (1983) that if government officials’ comments “can be reasonably interpreted as intimating that some form of punishment or adverse regulatory action will follow the failure to accede to the official’s request,” that’s enough to constitute state action. The Ninth Circuit has held that it doesn’t matter if the threats were the “real motivating force” behind the private party’s conduct.

A growing body of evidence suggests that social media companies have voluntarily worked with Democratic officials to censor content the latter disfavor. In Brentwood Academy v. Tennessee Secondary School Athletic Association (2001), the high court held that state action exists if the private party’s conduct results from “significant encouragement, either overt or covert,” or if the private party is a “willful participant in joint activity with the State or its agents.”

According to allegations in other pending lawsuits, Twitter formed “trusted partner” relationships with state officials to remove content identified by the officials as election misinformation—when in reality the content was simply critical of state policies.

In September 2020 Mr. Zuckerberg acknowledged that Facebook “works with” the Centers for Disease Control and Prevention to remove Covid-related content. The company’s official policy states that it is “advised” by public-health authorities about what Covid content should be blocked. For months, while officials including Anthony Fauci proclaimed that the Wuhan lab-leak theory was “debunked” and a “conspiracy theory,” Facebook blocked any mention of that theory as “misinformation.”

But after Dr. Fauci and the administration retreated from this position, Facebook almost immediately lifted its ban. Recently published email exchanges between Mr. Zuckerberg and Dr. Fauci reveal no evidence of direct instruction from the government on this point but make a case for Facebook’s willful participation in a joint activity with the government.

Mr. Trump’s lawsuits don’t go as far as they could have in establishing a pattern of willful participation, but their discovery phase will almost surely reveal additional examples. Social-media companies are privately owned, but when they collude with officials to block disfavored content, they are serving as the government’s censorship bureau and must answer to the First Amendment.

Mr. Trump has another path to legal victory even if he loses on the state-action claim. State legislatures, most recently in Florida, have begun to impose nondiscrimination and common-carrier requirements on Big Tech platforms. Opponents say these laws violate the companies’ First Amendment rights. But if so, how could similar nondiscrimination laws have been imposed for decades on telephone companies? Opponents also say these laws are pre-empted by Section 230. But as Justice Clarence Thomas observed in his concurrence in Biden v. Knight First Amendment Institute, Section 230 is arguably unconstitutional if interpreted to pre-empt state laws against viewpoint discrimination. Mr. Trump failed to assert this claim under Florida law, though he could amend his complaint before trial to do so.

Mr. Trump’s critics are mistaken to think the claims he raises are completely novel. But the case is unprecedented in another way—the staggering scale of Big Tech’s power to restrict speech. No company in U.S. history has so comprehensively silenced elected officials or prevented them from communicating with citizens. Worse, they did so at the behest of, and in careful coordination with, government leaders in the ascendant opposition party as it gained power.

In 1924 Commerce Secretary Herbert Hoover warned against the concentration of corporate power in the radio industry: “We cannot allow any single person or group to place themselves in a position where they can censor the material which shall be broadcasted to the public.” Almost a century later, the danger he foretold has been realized. Mr. Trump’s case provides an opportunity to address it.