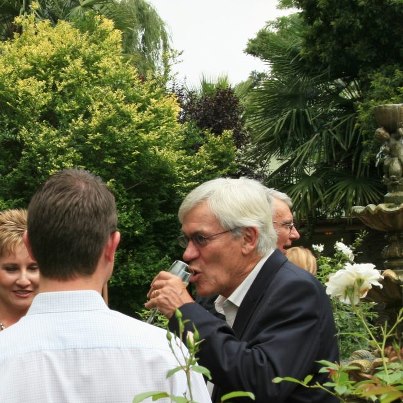 I wrote this tribute on Thursday, 1 November 2012, shortly after hearing the news that my friend and long-time colleague David Carte had passed away in the early hours that morning. He was 67. – AH

David Carte phoned me on Sunday. Neither suggested this would be the last time we spoke. But somehow we both knew.

This giant of financial journalism passed away last night. Finally succumbing to the rare lung disease about which he shared so openly and battled so valiantly. It has silenced the keyboard of the ultimate Good Guy. A man anyone would be proud to call friend. As was my privilege.

A year back, The Media magazine asked me to answer 20 questions for its back page feature. That prompted deep introspection. Leading to the surprise conclusion that my ultimate ambition was not to be a billionaire. Nor to become President. It was, rather, to die peacefully. And everything which goes with it.

David Carte, who referred to me as “my dear boy” even though there’s barely a decade between us, has achieved this.

I know, because of our Sunday morning chat. We shared stories. Laughed. Brought each other up to date. Me with the loss of Moneyweb. He on a reluctance to give in to his family’s wishes that he fight harder; that he agree for the extended clan to spend the millions needed to get him to America and a new lung. A transplant that could extend his life by years, perhaps even get him whizzing down those supersonic serves on the tennis court. But David said he was tired. Not prepared to go through months of recuperation. He’d had enough. I knew, then, he was saying farewell. David was ready to meet his Maker.

David and I were colleagues on four different occasions. First was back in 1980 when I arrived at the Rand Daily Mail as a wet-eared university dropout who’d shown enough at The Citizen to be poached by the country’s premier newspaper. A “lighty” from Newcastle who propped up the foodchain. He, infinitely more important, was the RDM’s Deputy Financial Editor. But ever humble. Anyone listening to the banter would never had guessed the difference in our station.

Classically handsome, very happily married, integrity so deep it seeped through every action, a strong work ethic but perfect life balance, respected by everybody he met. David taught us journalism was the most honourable profession available to man. He was the perfect role model for any young reporter. He became mine.

We linked up again a couple years later at Finance Week and then, when he was appointed to the top job in financial journalism at Business Times, he invited me to become his deputy. Taking a chance on a job-hopping, brash and rather wild young man. Teaching by example. As he did with many others, including his employment later of the eccentric, brilliant legal graduate Barry Sergeant.

Despite his intimate knowledge of the business world, David never did fathom out corporate politics. His principles always seemed to get in the way. Like a famous car-park shouting match with Stephen Mulholland; and head-butting with the intellectual but economically naïve Ken Owen. Between them, the then MD and new Sunday Times editor sidelined Carte to a non-job. That pushed him over to the “dark side” of public relations with the irrepressible Aubrey Sussens.

At my umpteenth request, David agreed to return to his first love when we joined forces again at Moneyweb in October 2005. Away from much better paying corporate advocacy, this most honourable of human beings thrived in our growing business for his final seven years. He was, once again, helping to change the world. Probing business icons. Asking difficult questions. And, as he has always done, providing the shining example for the rest of us. He did that right to the end. Writing another great piece last week. Dying with his boots on.

But if there is one thing David will be remembered for, it was his eternal optimism. Perhaps that came from family roots in the Drakensberg. Or his years at Maritzburg College, a school of which he always spoke so highly. Or the love of his “Dutch Darling” Monique, his beautiful daughters and the extended family they produced to his enormous delight. I’d like to think, though, that it was David’s faith that gave him the half-full perspective. A knowledge that God really is in control. That everything is somehow part of a Master Plan.

On Sunday we spoke quite a bit about death. I reminded him of the eulogy which Steve Jobs’ sister Mona Simpson wrote in the New York Times. Surrounded by his wife and children, Jobs spoke six words before closing his eyes for the last time. As he was slipping to the other side, he said….”OH WOW, OH WOW, OH WOW.” I have no idea what David saw on his final journey. But do know that he, too, was surrounded by love. And died peacefully. The ultimate achievement, surely, for a life well lived.

* There is a wonderful tribute to David on Moneyweb by his favourite colleague, Monique Vanek.