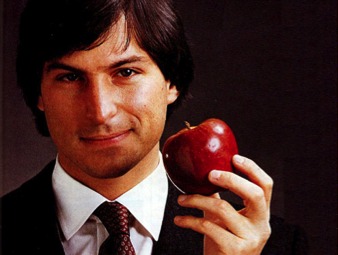 Baruch Lurie was spot on. In a comment posted beneath my first review he said the Steve Jobs book started slowly. But from page 150 he was “totally engulfed.” Ditto for me.

If those first few chapters were a titbit, the next couple hundred pages have been like Sunday’s roast after a long walk and no breakfast. Hard to keep myself in check.

The deeper I delved, though, the more Isaacson’s work reminding me of The Snowball, Alice Schroeder’s biography about Warren Buffett.

In her case, Alice explained up-front that Buffett provided an open door to himself, close friends and family. His only proviso was should versions of a story differ, Alice be honour-bound to use the less flattering one. It came back to bite Buffett, with family skeletons clattering out of long closed cupboards. His relationship with Schroeder cooled after the book was published.

Jobs offered the same access to his chosen biographer, Walter Isaacson. With a similar result. The author has gone overboard in highlighting Jobs’ character defects by allowing greater weight to comments from those alienated rather than the Jobs loyalists.

Perhaps Isaacson erred in his desire to avoid being seen to be too close to the technology genius. After devouring half the book, he can safely scratch that danger.

Indeed, the slant has been so severe that one starts to wonder how Jobs managed to get anyone to work for him. Until age 30 at least – which is where I am now – Isaacson has painted him as a whimperer (adept at turning on the water works, especially in meetings when he wasn’t getting his own way), self-absorbed and a downright nasty young man. The author has surely overdone it. There’s no way someone that dysfunctional could energised colleagues to achieve the Apple-driven revolution in the computer/movie/telecoms/music worlds.

So I started thinking about another recent biography that attacks an icon – Naifeh and Smith’s tome on Vincent van Gogh. And then it struck me. Jobs regarded himself first and foremost as an artist. Like Van Gogh, he strived for perfection, pushing himself to extremes, demanding the same from those he worked with. And from what they created. To him, making “insanely great” products mattered far more than the bottom line.

Over the decades, that approach built to a legion of Apple devotees. But it sits uncomfortably with contemporary business thinking. Most occupying executive suites nowadays, especially trained accountants, are programmed to extract the maximum margin while keeping the cash register ringing. So to read Jobs being portrayed as an eccentric with wild mood swings by business school trained competitors (most famously IBM and Microsoft) is hardly a surprise.

But for those who shared Jobs’ obsession for excellence, those well-documented foibles were a small price to pay. Those rare birds, those equally driven human beings were attracted to Jobs like bees to the honeypot. The 90-hour a week, soda-swilling, pizza-consuming brigade who, like Jobs, wanted to change the world. And did. And while doing so, claim to have had the best time of their lives.

Isaacson also refers often to Jobs’s “reality distortion field”. Jobs, we read, created his own version of the truth, ignoring known facts and creating in his mind – and those who fell under his spell – something other than reality. At times this pushed Apple staffers well past what they believed were their own limits. But sometimes it makes Jobs look like a cheap conman, a self-serving Baron Munchausen railing against level heads trying to bring him back to reality. And yet… on another page we read how Jobs loved people who stood up to him, who challenged his instructions, applauding those who ignored him and proved him wrong.

Whatever your own assessment of this complex argument, there’s no doubt that Jobs struggled throughout to overcome the dark side of his company’s growth. As they get bigger, corporations require ever-greater compliance with systems and structures. That makes them uncomfortable places for non-conformists, a sub-set for whom Jobs carried the standard. Left to their natural devices, all large organisations – Corporations, State Departments, Governments – tend to celebrate mediocrity rather than brilliance. They promote comfort zones, not stretch.

That truism is emphasised in the vast differences between Jobs and man he brought in as Apple’s CEO, former PepsiCo chief John Sculley. During the honeymoon first year, we read how Sculley bragged of how similar they were. Claiming the younger man was an earlier version of Sculley himself. Isaacson shatters this delusion, providing many examples of their vast differences: Sculley is shown to be a conservative marketer (he voted against the risky but brilliant ‘1984’ Ad that launched the Mac); was disinterested and hence clueless about Apple’s products; a suit rather than an innovator; and worst of all in Jobs’ world, a conformist rather than a rule breaker.

The chunk reviewed here covers the late 20s early 30s stage of Jobs’ life; his firing from Apple; a lengthy affair with 14 years older folk singing legend Joan Baez; his investment in the seemingly bottomless pit called Pixar; a friendship that turned very sour with Microsoft founder Bill Gates; the litany of errors with his NeXT Computers. It moves from one fascinating point to the next. And is riveting reading.

For me, the most provoking part of these couple hundred pages was Jobs’ laser-like focus, his unbelievable self-discipline and self-belief and, most impressively, his attention to detail. For instance, Jobs learnt from his father that the stuff you don’t see in a product needs to look just as good as that which is exposed. Accountants would call that unnecessary wastage. Jobs believed it was critical for the product to be totally brilliant, right down to the quality of screws hidden deep inside the casing.

On reflection, this attention to detail is a quality shared by many great entrepreneurs. Hotelier Sol Kerzner was known to get the construction companies to rebuild an entire wing because something looked unbalanced. Insurance tzar Donald Gordon was fanatical about knowing each detail of the life policies Liberty underwrote. Industrialist Brian Joffe knows where every cent in the now massive Bidvest is generated.

Steve Jobs was just like them, right down to changing menus, seating arrangements, adverts, even keystrokes if they didn’t work just right. Knowing how everything worked, getting the details perfect, was a critical part of his success. A timely lesson in an era where we’re encouraged to delegate and outsource, to not sweat the small stuff.

And left wondering why it’s the small stuff that trips up so many of the big ideas.

To read the final part of Alec Hogg’s review of Walter Isaacson’s book on Apple’s founder, click on the link below.

Part Three: Who you marry makes a huge difference