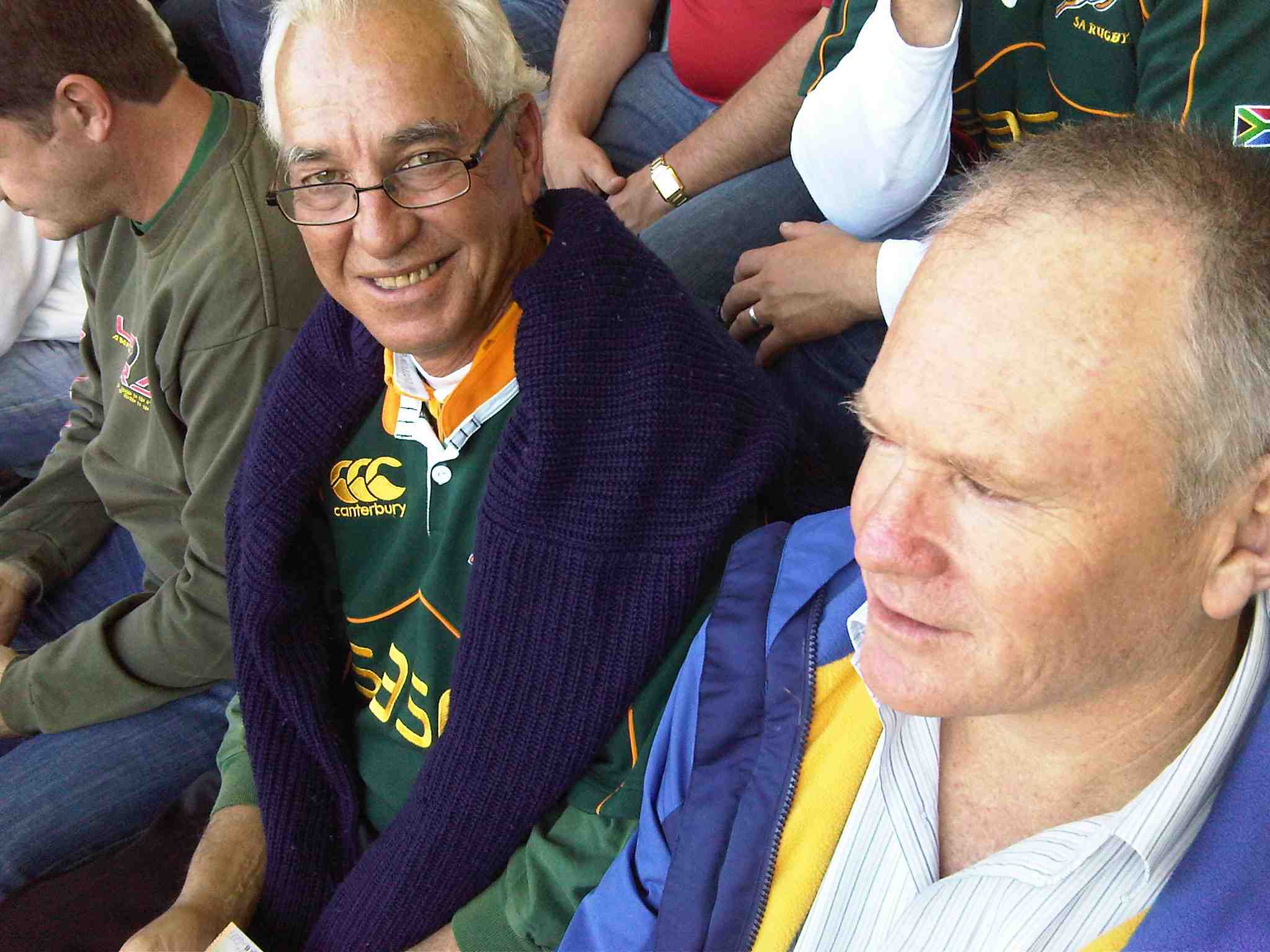 In October 2009, we buried my dear friend Flip Meyer (pictured with glasses). He was one life’s great characters, a widely respected and admired financial journalist and a man with a huge, generous heart that touched everyone he met. His wife Koekie honoured me by asking me to give a eulogy at Flip’s funeral. I return to it from time to time as a reminder of mankind’s mortality, that we are all heading for the same destination so it is best to live every day like it’s your last – and of lessons Flip taught me in both life and death.

Here is the full text:

Every year during winter and early spring, the golfing Mecca of Fancourt runs a special offer, which it calls, appropriately, Tee Off in Paradise. Together with my two closest pals, Flip Meyer and Edwin Jay, we discovered it about a decade back and in many of the subsequent years travelled to George for a long weekend of golf, banter and, of course, the usual deep philosophical discussions over dinner.

The year Fancourt opened its exclusive course, The Links, the three of us managed to delude ourselves we were playing in America so coughed the equivalent of a couple hundred dollar green fee. That became some of the best hours of Flip’s life. As Edwin and I like to give the golf ball a good whack, we were easy meat for this devil of a course. Flip’s more sedate golf game was far better suited to the conditions – as a result he annihilated us. And from that day forth, he dubbed himself “The Links course specialist”, his way of reminding us that no matter how poorly he might have done in the hundreds of other golf games we played Sunday mornings or on our quarterly get-aways, nothing would erase fond memories of how he destroyed us at The Links.

Yesterday it was exactly a month ago that Flip the golf nut played his last game. The venue, appropriately, was The Links. It was as though God knew this was to be a special occasion. The sun shone only as it can in Africa. The golf course – more forgiving than that first time – had been manicured to perfection. And the three of us bantered our way through five hours of sheer pleasure as only really good, old friends are able to. We were scheduled to play at a different course the next day, the last of the weekend. But it was as if the Great Decider had another idea, so sent the rain clouds so our memory of that last game together was left unspoilt.

During that weekend, Jeanette and I took a drive to the Cango Caves, one of those geological miracles we South Africans often take for granted. While waiting to join our group, we wandered around an exhibition designed to stimulate interest in our natural heritage. On one wall was a large clock showing that in 24 hours of the earth’s time, human beings have only been around for the last few seconds of the last minute. That picture has stayed in my mind. As did the stalagmites and stalactites inside the caves, perfect columns which take thousands of years to grow a metre. They tend to put time into perspective. Reminding us that our stay on this planet is brief. Gone in less than a blink of God’s eye.

Flip appreciated this reality better than most.

He was also the man of a hundred nicknames, mostly given by himself to himself, like “Die Masjien” and “The Natural” which were created on those rare days when his golf was in a groove; or “Flights” which he used for himself when teasing a couple of drunk Selous Scouts he was cleaning up at darts; or “Meyer die Leier” while he was leading our quarterly golf competitions. Looking back on Flip’s life, the one he missed which might have been the best of them all would have been “Volhard” Meyer. Because everything he did was with 100% effort.

When Flip watched cricket, he camped in front of the television set. That included every ball of those five day tests while our Proteas were playing in Australia. He dropped everything when a guy I met at lunch gave me three tickets to the opening game of the 1998 Soccer World Cup where Bafana Bafana was playing France. Like any sensible person, we thought the game was in Paris, so hadn’t prepared for a two day drive from London to the Olympic Stadium in Marseilles. But with Flip, that drive across France became an adventure. And another of the many great memories he left to so many of us.

A friend of mine who is 81 says that looking back on his life he’s realized that memories are our real treasures. And on that score, Flip gave me many gifts. Including some cigarette holes in my big South African flag, made as we waited for Joel Stransky to drop that goal in the 1995 World Cup Final. The most special of all these days, though, was exactly four months ago today, June 27th. We celebrated Flip’s 60th birthday at Loftus watching one of his beloved Blue Bulls, Morne Steyn, landing that last minute penalty to end the 27-year wait by his equally adored Springboks to beat the British Lions.

To say sport gave Flip pleasure would be an under-statement. Even his black and white dog was called Sharky. Well, not really his dog, more Koekie’s actually, but he liked to think it was. And told me story of how, in his normal mischievous way, he decided to play a trick on Koekie when she was away a few weeks ago and called him every day to remind him to feed the dog and spend some time playing with it. So Flip made it a mission to win over Sharky’s affection, spending hours throwing the ball for the dog. And, giving his wife the surprise of her life when they arrived home and Sharky ran up to his new friend, completely ignoring Koekie. The teasing clearly wasn’t just for his pals!

Flip and I were both drawn to financial journalism. We’ve been good friends since 1982 when we spent two weeks together attending the IMF meetings in Toronto. He loved his job and contributed hugely to the development of Afrikaans financial journalism in South Africa, mainly through the consolidation of the business sections in the Naspers group into Sake. Flip also took his job very seriously and might not have disagreed if you’d described the pre-retirement Mr Meyer as a workaholic.

He did find time for fun, though. Especially in the early years of our friendship when we got up to the nonsense you’d expect from drinking buddies. Thankfully we both realized around the same time that some people do better without alcohol, so thanks to Divine Intervention, both of us put the plug in the jug around 20 years ago. Had we not, today’s event, and mine for that matter, would have happened many years ago and surely under very different circumstances.

As one can imagine, his daughter Liezel’s death had a profound influence on Flip. It drew him and Koekie a lot closer together: he never complained quite as much when she forgot to pack his golf shoes for our regular trips. His and my bond deepened when he was forced to relive that pain, and those lessons, when sharing his experiences after my son Travis died in May last year.

One of the discoveries he shared was how we often learn more from the death of loved ones than we did from them while they were alive. After Liezel passed on, Flip became an even better example of someone who wore the world like a loose cloak; one who realized how true it is that we are all spiritual beings having a human experience.

He unleashed his adventurous spirit, and thought nothing of travelling alone to faraway places like Scottsdale, Arizona; Porto Banus in Marbella; or Bucharest in Romania. And coming back to entertain us with stories of what he had seen, the fascinating people he had met – and with a smile, absorbing the inevitable teasing about how he was rapidly on his way to becoming a sneaky East European estate agent or a spin doctor for a crazy fortune teller.

I know with absolute certainty that Flip has moved on to a better place. What I don’t know, but fervently hope, is that it’s also a place where he has been able to give Liezel a bear hug and tell her how much he loved “the kid” as he called his only child. I also hope it’s a place where he will get to know a father who died too young; where he’ll engage again with another of our friends Deon Basson; where he and Robbie Armitage will tee up every morning for 18 holes on the golf course in the sky. I also hope he sees Travis again and tells him how much his father misses him.

Philosophers through the ages have suggested that it is vain to grieve for those whom we will quickly follow. They have a point. Before we know it, we’ll be met by Flip’s firm handshake, his naughty hazel eyes and that deep voice. But as we all suffer from the human condition where grief is part of our coping mechanisms, there will be more tears shed before we finally release our friend.

But when we do reflect rationally on Flip’s life, as we all shall at some point, I’m sure we’ll realize he taught us much. Re-affirming, perhaps, that life is short and fragile. That we just can’t take for granted that we, or our loved ones, will be here tomorrow. His message to me is live every 24 hours as though it is your last; give yourself the freedom to dream – and then make those dreams happen by taking the uncomfortable decisions. I can hear him saying, again, don’t keep putting off what you really want out of life.

Stephen Covey, a Mormon from Utah whose writings have changed the way millions of people think about their lives, said it best when he explained that it’s incredibly easy to get caught up in an activity trap, in the busy-ness of life; to work harder and harder at climbing the ladder of success. Only, he says, to discover the ladder is leaning against the wrong wall.

Flip’s life, and now his death, is a reminder to those of us who knew him to check which wall our ladders are leaning against. And if we find it’s the wrong wall, not to hesitate, but to pick it up and move it.

Post script; The first colt born during our time at Graceland Farm was named The Flipster in my late friend’s honour. We’re hoping that he sprints as Flip the human was a dynamite 100m runner. He is likely to make his racecourse debut in 2013.