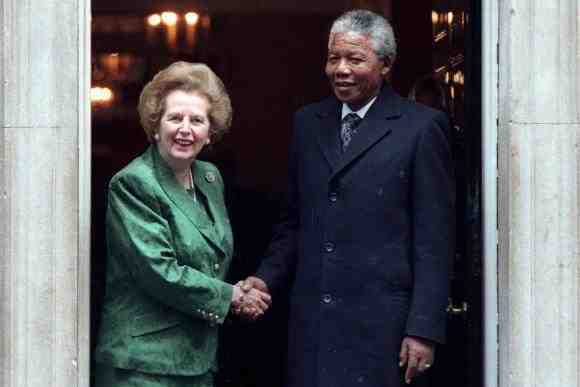 South African President Jacob Zuma was among the first heads of state to offer his nation’s “heartfelt” condolences after news broke today that Maggie Thatcher (87) has died. His action spoke volumes. Confirming the reputational rehabilitation of a woman once reviled within the ranks of those fighting to end Apartheid.

Because of last year’s movie starring Meryl Streep, the world now knows all about the mental challenges faced by the former UK Prime Minister during her dusk. But judging by the first published excerpts of a new book by Sir Robin Renwick, once they get to know her through these pages, many who held a different opinions are sure to warm to the Iron Lady. Not least because of the affection which our own Madiba had for Mrs T. Appropriately, our pic (from the London Sunday Times) shows them smiling for the media after meeting for the first time in 1990.

I had the privilege of meeting diplomat-director-author Robin Renwick only once. It was for a radio interview while he was a non-executive director of SABMiller. He came across as warm, humble and authentic. Even though he left here almost two decades back, Renwick maintained a close relationship with South Africa by serving on the boards of the beer brewer, miner BHPBilliton and Harmony Gold, and although now 75, is still a director of Richemont.

But the author of the well-timed A Journey with Margaret Thatcher, is best remembered here as the UK’s Ambassador to SA during the country’s critical years from 1987 to 1991. Renwick left Pretoria to take up the highest post open to him, Ambassador to the USA, from whence he retired from the diplomatic service in 1995.

Yesterday (April 7) The Sunday Times of London published a lengthy extract from Renwick’s book which is sure to find a ready market after its release on April 23. The article is especially relevant for South Africans as the excerpt focuses on his time in this country.

The newspaper’s online edition is only available to subscribers. So I cannot open the article for you in the link to the piece. Neither can I republish it in full. But given how relevant and timeous it is for South Africans, I’m sure neither Lord Renwick nor the newspaper would object to the sharing of a few paragraphs.

Beginning with Renwick’s description of the Groot Krokodil: “Neither I nor anyone I knew warmed to President PW Botha of South Africa. His domed head and tinted glasses gave him the appearance of a B-movie villain. He was in the habit of receiving me, the British ambassador, in a study lit only by his desk lamp, conjuring up images of what it must have been like calling on Hitler in his bunker.”

He has much kinder words for the often under-appreciated man who dragged his Apartheid Government to the negotiating table. A man who understood even while PW ruled that a different route was needed. Renwick writes: “One of the first senior government ministers I met on arriving (as ambassador in 1987) was the supposedly deeply conservative FW de Klerk. At the end of a long and friendly conversation he said to me: “I want you to know that, if I have anything to do with it, we will not make the same mistake they made in Rhodesia.” What was the mistake, I asked. “Leaving it much too late to negotiate with the real black leaders,” said de Klerk — recognition of how badly Rhodesia’s white government had played its hand in trying to prevent black majority rule a decade earlier.” Click here to read FW’s statement on Mrs Thatcher’s passing.

Most of the newspaper’s excerpt is devoted to Thatcher’s engagement with Nelson Mandela. What Renwick shares is illuminating: “He (Mandela) was about to leave on his first visit to the United States, to be followed by a meeting in London with Thatcher (their first). I told him that we were extremely worried about his schedule in America, where he was expected to visit seven cities in 10 days. If he allowed this, his US hosts would end up killing him.

“As I feared, after his visit to America, Mandela arrived back in London suffering from a chest infection and utterly exhausted. I saw Thatcher before the meeting. Mandela, I told her, was no Marxist, and it was the regime that had forced him to threaten violence. His own activities in that regard had been limited to trying to blow up a few electricity pylons. He was, I told her, very different in character from any other political leader I had ever encountered.

“Asked if he bore any resemblance to Mugabe, I was able to assure her that I had never met two political leaders who bore less resemblance to each other than Nelson Mandela and Robert Mugabe. I reminded her that he had waited 27 years for the chance to tell her and other heads of government his story. “You mean I mustn’t interrupt him?” she inquired.

“The meeting lasted three hours. The prime minister was very concerned about Mandela’s state of health and attempted to revive him with a small glass of port. As he put it, “She chided me like a schoolmarm for not taking her advice and cutting down on my schedule”. Displaying, for once, exemplary patience, she listened, asking no more than a couple of questions, for more than an hour as he explained to her the history of the ANC and the difficulties he was facing in negotiations. He thanked her for the support he was receiving from us, but made no headway with a half-hearted plea for more sanctions.

“Over lunch there was an intense discussion of the sort of constitution that ought to emerge and that we could support. She found him “supremely courteous, with a genuine nobility of bearing” and — to her amazement as well as that of others — devoid of any trace of bitterness. But she also found him very outdated in his attitudes, “stuck in a kind of socialist time warp” — hardly surprising, she acknowledged, given the three decades he had spent in prison. Her attempts to correct this resulted in a hilarious exchange on basic economics…….

“……During Thatcher’s visit to South Africa and on subsequent occasions Mandela stated publicly that “we have much to thank her for”, despite her disagreements with the ANC about sanctions. Though she was no friend of liberation movements, no head of government had tried harder to secure his release.

“When Mandela made his state visit to Britain as president of the new South Africa, he insisted on meeting her to thank her again for her assistance in helping to secure his release from prison. On several of his subsequent visits to London he took time out to keep in touch with her. Whenever I have seen him, he has always asked me to pass his regards to Margaret Thatcher.”

* Extracts are from A Journey with Margaret Thatcher by Robin Renwick, to be published by Biteback on April 23 at £20. Copies can be ordered for £16, including postage, from The (London) Sunday Times Bookshop on 0845 271 2135