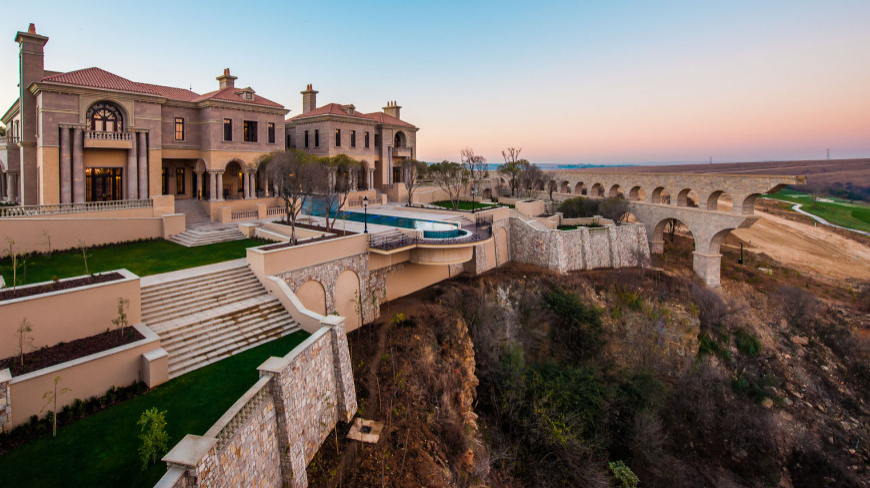 Must admit I’m a bit behind the curve on this one. You may be too, because the spectacular Steyn City has been played down as it is only due to launch to the public next year. But given all the gloom and doom going around SA right now, it never hurts to highlight successful visionaries swimming against the tide like insurance entrepreneur Douw Steyn whose new home, Palazzo Steyn, is the country’s most expensive residence – even beating Nkandla’s taxpayer-funded Zumaville. – AH

Insurance entrepreneur Douw Steyn’s vision of an 800 hectare estate between Johannesburg and Pretoria is rapidly taking shape. The low profile billionaire’s own home, the R250m Palazzo Steyn, is the centrepiece of Steyn City, which launches to the public next year. The house, South Africa’s most expensive, has 3 000 square metres under roof in a two and a half hectare enclave.

Sixty-two-year-old Steyn, who was schooled in Linden, Johannesburg and went to university in Potchefstroom, was only 33 when he launched the disruptive Auto & General Insurance in 1985. Seven years later he replicated his model in the UK with Budget Insurance.

Steyn owns the up-market Saxon Hotel in Johannesburg and the Shambala private game reserve in Limpopo. But his biggest investment by far is Steyn City which will have swallowed R6bn in infrastructural costs by the time it is launched to the public next year. Close to the mushrooming Lanseria Airport, it is more than double the size of neighbouring Dainfern Estate and has been in development since 2008.

He describes the the project as a reflection of his confidence in the future of South Africa: “Unfortunately, many successful South African business people, who built their fortunes here, went on to disinvest in the economy. I see things differently.”

Typically, the painfully low profile Steyn chose to talk about the project through a question and answer interview published on the project’s website.  In it Steyn explains that the project “began with a tract of land that the director of Steyn City Properties, Giuseppe Plumari, first acquired, bordering Dainfern and privately-owned land to the north. I acquired the remaining portions to make up the current 2 000 acres of the estate.

“Giuseppe and I share the same vision – to create a lifestyle estate unlike any other in South Africa built on the foundation of quality of life. A country estate offering country living, but with all amenities conveniently within reach. Too much time is wasted in cities sitting in traffic and commuting between home, work, schools and the shops. We want to bring all these elements of daily life into one estate and give residents back the precious commodity of time, in a secure, upmarket environment.”

“I’ve always wanted to invest further in my country. The spirit of ubuntu is unique and unparalleled anywhere else in the world that I’ve lived or visited.

“I could have invested in a luxury residence in Europe or in the States, but instead I chose to invest in South Africa. This is indicative of the confidence I have in our country and the success of Steyn City.

“I also long for the quality of life that we are creating for future residents and it therefore made sense for me to be a part of it. I don’t know of many investors that live on the lifestyle estates that they have developed. My wife and I are looking forward to entertaining our friends and business partners from all over the world at our new residence, while also exposing them to our magnificent country.”

Steyn City is planned to host 11 000 residences. It will also have a private hospital, two private schools and a number of office parks. Half the estate will be wooded parkland through which there will be a 42km running track.

Here are some more of his responses from the Q&A with the project’s website. You’ve got to love the last one:

Is it true your residence has a garage for 33 cars?

DS: My home has a basement area that will house my car collection of sport and vintage models. This is one of my hobbies and the architects were briefed to design a showroom where the cars can be easily displayed and manoeuvred.

Are you also an investor in Steyn City Properties?

DS: Yes I am. Steyn City Properties is spearheading the development of the estate.

@ButterBirdie @alechogg & your point being? I think his argument would be that he is creating thousands of jobs for the people of Diepsloot

Is it true that Steyn City has cost R6 billion so far?   DS: No. R6 billion is what the infrastructure phase will have cost at the time of launch to market in the summer of 2015. This phase includes the internal and external utilities beyond our boundary walls, such as water, sewerage and roads that will benefit stakeholders in the area. We have also partnered with government to fast-track the completion of major routes, including the William Nicol and Erling interchange, with the result that this commuter belt will be transformed.

Why have you named the estate after your family name?

DS: This question always makes me chuckle. Did anyone ever ask Donald Trump why he called his building in New York City Trump Tower? You will notice that our family crest forms an integral part of Steyn City’s corporate identity and this project was the ideal opportunity for me to honour my heritage by leaving a legacy of my family name in the country of my birth.

UPDATE: This story evoked considerable reaction on my Facebook page. Here are some of the comments: 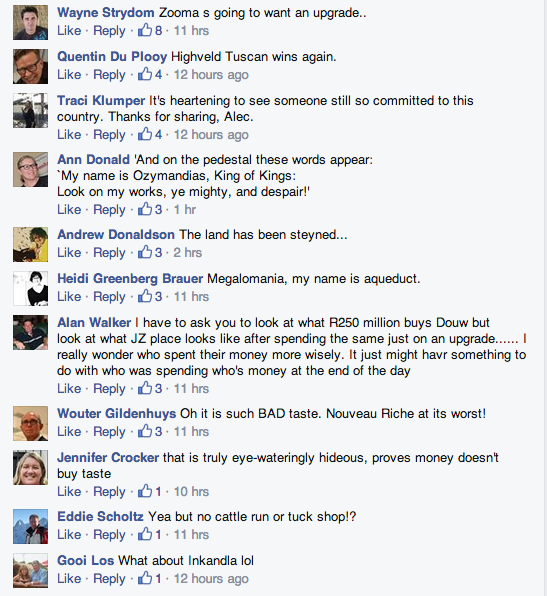