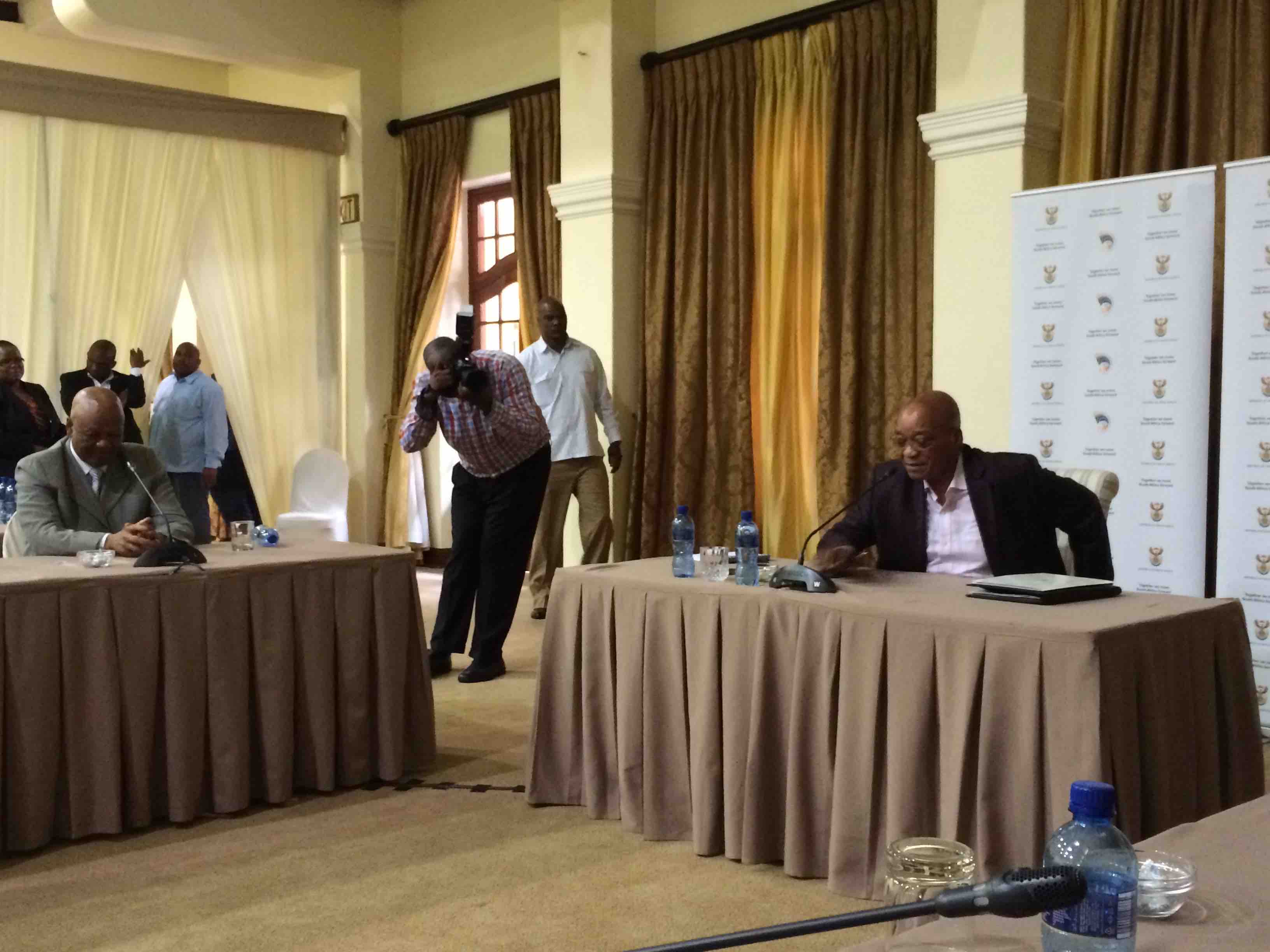 Yesterday was my third meal at the Presidential Guest House, a couple decades after the first two. The food was similar (substantial, no frills), the spacious grounds and buildings well maintained. A soccer field with netted goalposts has taken over a golf fairway and the policemen seemed more relaxed. The biggest difference, though, was the incumbent who charmed, joked and engaged with his traditional enemy, the media. We saw Jacob Zuma at his most relaxed. In his castle. Here are the highlights of an hour and a half of Zuma sharing his thoughts and opinions. – AH

We are all products of our environments. Including, or perhaps especially, South Africa’s 72-year-old President Jacob Zuma. We can learn a great deal listening, observing. Particularly when the subject is relaxed, in their own comfort zone. Zuma was in that space yesterday, freely expressing opinions and answering questions – some pointed – for an hour and a half.

Zuma has strong views on Eskom: “We were told in 1994 that SA we had an oversupply of electricity. That was not correct. With the economy growing and rolling out services to more people we realised that historically we never had enough power. We have added access to 11m, but many millions of South Africans still do not have electricity. We are now dealing with it. We are building huge power stations. We will be using nuclear. This is addressing the past.”

Zuma wants his critics to apologise. He maintains Parliament has followed due process and cleared him. The President switched to the third person when offering his perspective: “When the matter of Nkandla was raised the view was Zuma squandered R250m. Zuma never decided the security upgrade was needed. Zuma did not eat the money. The media said I am corrupt and that because it starts at the top the country is corrupt. But why does nobody apologise? It is not a small matter than my name was raised. There is something fishy in this.” Zuma said he pays a bond on his own house at Nkandla. And referred to the “struggling economically” George Airport which was built as part of the security requirement for a previous President (PW Botha). Why, he asks, does nobody questions that?

Repeating a recurring theme, Zuma maintains SA’s economic problems are “basically historic – as a Government we are doing our best to deal with the problem.” He has full confidence in the cabinet’s economic cluster and says Thursday’s State of the Nation Address will provide details of some of their successes.

In Davos, Zuma and his team met with leaders of global mining groups who he said are very optimistic about SA’s mining sector: “they have confidence that the accords we struck will prevent long strikes in future….they are feeling very optimistic.” The issue of beneficiation remains key to his view on how to develop the mining sector, creating jobs from SA’s mineral wealth: “Some of us believe we have to discuss the whole matter of beneficiation more frankly.”

This issue was discussed at length in Davos but no solutions were offered to counter the trend of growing income disparity. Zuma has some novel suggestions: “Should we not be considering making some sectors labour intensive all around the world?” His views are clearly shaped by early experiences as a trade unionist: “As a young fellow I saw how many lost jobs because the machines came. There were long lines of people packing tea. And then the machines came and replaced them.” A modern day Ned Ludd?

Zuma: “The monopolisation of economies is at an extreme. Big companies are swallowing smaller ones, restructuring and putting more people out of work. The growing gap between rich and poor is a global issue not just a South African one. Are we not approaching a tension which will develop into a real problem?”

Julius Malema and his red clad cohorts are disrespecting hard working miners and demeaning domestic workers by wearing their uniforms to Parliament says Zuma. He believes everyone who voted EFF must be sorry today: “The EFF told us they would come to Parliament to misbehave. We will use the rules of Parliament to make them behave. They will come right.”

His frequent references to Jesus Christ:

Zuma: “Why should I not be allowed to refer to Jesus? I am a Christian and I believe that Jesus will return and come to fetch us. Every Christian talks about Jesus.“

Zuma is out of step with most of world leaders regarding global polecat, Russian President Vladimir Putin. I asked him where SA stands on Ukraine and was provided with his view of history (“Ukraine was part of the Soviet Union…) supporting his sympathetic perspective. Zuma says SA follows the official BRICS line that the matter could have been handled differently but there is no need for war. Nothing was said about Russia breaking the Minsk Memorandum and capturing an additional 550 sq km since its signing four months ago; or the Russian missile which hit a bus carrying 28 Ukrainian children; the missile which downed Malaysia Air MH170; the 9 500 Russian troops and 600 tanks now on Ukrainian soil; etc.

Zuma: “It must never be encouraged in SA. We believe that our diversity is our greatest strength in this Rainbow Nation. Deciding on people based on where they come from is a very dangerous issue. People should understand that we are all equal. Our law says so.”

His legacy to SA’s youth:

Zuma explained that he was engaged in The Struggle from an early age and wants young people to know they can get involved and make a difference to society: “And realise you can work with people with very different views. Don’t get angry with people who criticise – they criticise because they disagree, not because they hate you.”

Zuma’s perspective here is consistent with some of the other major challenges SA faces: “The country has a particular history. I have confidence in the Police Commissioner.”

Much talking and thinking needs to be done on the subject, he says, as the ultimate intention for Africa is to remove borders and encourage the free movement of goods (and people). But, says Zuma, “Are we ready for that? It is not an easy matter. But we do not have a foreigner problem in SA. We have had them from time immemorial.”

* Alec Hogg is the founder and editor of Biznews.com