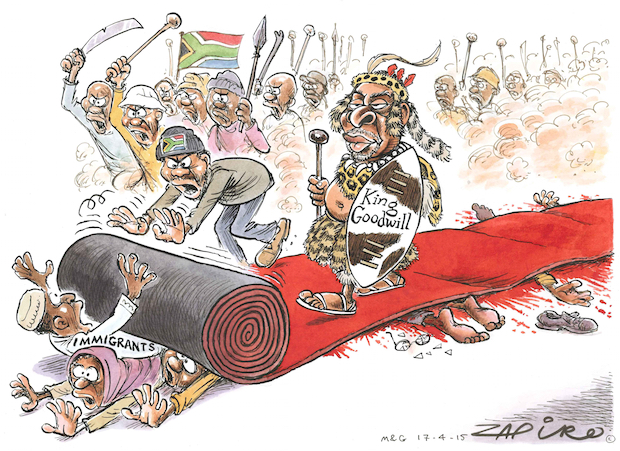 South Africa has perhaps the most enlightened human rights legislative structure on earth. It has a highly accessible Constitutional Court, a place where all are encouraged to take matters that support the dignity of everyone who lives in the country. The leaders of SA’s ruling political party are guided by a credo of ensuring they protect and enhance a “non-racist, non-sexist democracy.” The country also gave the world the incomparable Nelson Mandela. Those are high standards. But over the past week, the nation has plumbed new depths with some of its citizens massing to attack and indiscriminately kill immigrants. Many of them driven here by a man recently celebrated in SA, Zimbabwe’s President-for-Life whose deranged economic policies have created mass misery. With the slaughter sparked by a hereditary leader out of touch with the realities of a modern nation. Here’s the way Reuters is telling the story to the world. – Alec Hogg

By Kenichi Serino and Stella Mapenzauswa

JOHANNESBURG, April 19 (Reuters) – When he heard angry screams and the hammering of hatchets on the door of his shack last week, Malawian Folias Sakai thought he was about to become the eighth person to be killed in anti-immigrant attacks that have swept South Africa this month.

Instead Sakai managed to escape the mob by scrambling over the metal rooftop of his shack in aJohannesburg slum into the safety of a nearby alleyway.

“They were going to kill us,” said Sakai’s Zimbabwean friend Tendayi Chimukako, who helped him escape.

Zwelithini’s comments resonated with many poverty-stricken South Africans who say foreigners have taken advantage of lax immigration rules to flood the country and “steal” jobs. TV stations across the country have broadcast scenes of angry mobs armed with machetes looting immigrant-owned shops.

According to census data, South Africa has an estimated 1.7 million foreigners living within its borders, though many claim the figure to be much higher. Though it is one of the continent’s economic power houses, the country is nonetheless grappling with high unemployment, poor services and crime.

Zwelithini has since said his words were taken out of context. But the xenophobic violence they sparked is the worst in the country since 2008, when at least 67 people were killed.

As a result thousands of immigrants from countries like Zimbabwe, Malawi, Zambia and Mozambiquehave fled to refugee camps.

Some of them spoke to Reuters from a packed camp outside Johannesburg, where armed police patrolled the camp’s razor wire fenced perimeter.

Chimukako explained that he had left his home country of Zimbabwe because of its economic collapse, blamed by many on nearly three decades of President Robert Mugabe’s rule there.

“There are no jobs, even the food is hard to get,” he said. “If I go back to Zimbabwe I will starve.”

But many South Africans for whom the day-to-day is equally tough, struggle to sympathise with the immigrants.

“It’s hard here without a job, too many foreigners,” unemployed South African Thuthu Mchunu told Reuters from Actonville in east Johannesburg, nodding towards a row of abandoned shops mostly owned by immigrants.

“They take the jobs. They do them for small money.”

Zuma and his colleagues in the ANC, the anti-apartheid party once led by late Nelson Mandela, have condemned the violence and urged South Africans not to vent their frustrations at foreigners.

But many experts believe it is the failure of the ANC to alleviate poverty and redistribute wealth since the end of white-minority rule twenty years ago that is the root cause of the unrest.

South Africa has made significant progress in delivering broad access to housing and basic services since 1994 but millions of people from the black majority still live in shanty towns, while a quarter of people are unemployed and 60 percent of youths are without jobs.

“Xenophobia is becoming a barometer of dissatisfaction for the lack of service delivery and jobs,” said Hamadziripi Tamukamoyo, a researcher at the Pretoria-based Institution for Security Studies.

The violence is tarnishing South Africa’s post-apartheid image as a for the oppressed, encapsulated by Mandela’s vision of a unified “Rainbow Nation”.

The damage is worse because thousands of South Africans took refuge in the same neighbouring countries seeking help now, when they endured decades of violence under white-minority apartheid government.

“(We are) witnessing hate crimes on a par with the worst that apartheid could offer,” said a statement on the xenophobic attacks from the foundation of Archbishop Desmond Tutu, South Africa’s Nobel Peace Prize winner.

“Our rainbow nation that so filled the world with hope is being reduced to a grubby shadow of itself.”

Though the violence has predominantly affected Africans, other immigrants have been targeted.

Bangladeshi shop owner Shameen Muhammed said he lost everything this week when a mob of twenty men looted his small cornerside supermarket.

“I thought I would come to this country and do well,” Muhammed told Reuters by phone from a room inJohannesburg where he is hiding along with 30 fellow Bangladeshis.

“We have no food. If go outside I am afraid,” Muhammed said.

“My life is not safe here.”

South Africa: The shame of a nation that has forgotten its history too soon http://t.co/TcPmFOmNrn #XenophobicSA pic.twitter.com/H8vBEK4LD8

Was so moved by this FB post. We need such counter-narratives. To move beyond a discourse of hate. #XenophobicSA pic.twitter.com/R4dzVlDTlU

#XenophobicSA sends ‘peace’ troops to eastern DR Congo, but can’t use the same troops to protect Congolese back in SA! What am I missing?