Skip to content
The world’s richest man, Microsoft’s founder Bill Gates, last night stuck a stick into the eye of capitalist icon Ayn Rand. Gates claimed on CNN that the US’s tax rate of 35% – considered excessive by conservatives – is not a drag on innovation. Were she alive, Ayn Rand would have vigorously countered Gate, doubtless accusing him of having gone soft in the head now that his fortune exceeds the GDP of over half the nations on earth. Gatesland would rank 65th of 188 countries – and 4th behind Nigerian, Sa and Kenya were in Africa. Gates, on the other hand, would doubtless say Ayn Rand’s Atlas Shrugged and The Fountainhead were just novels reflecting her view of life, not reality. – Alec Hogg
By Ros Krasny 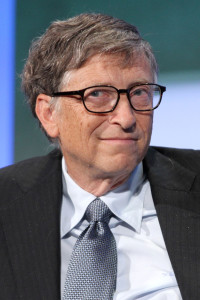 The world’s largest economy is struggling to gain momentum, and tepid wage growth continues even as the unemployment rate is at the lowest level since May 2008.

Gates, whose net worth is estimated at $86 billion, according to the Bloomberg Billionaires Index, said a person making $40,000 a year is better off now than someone making an equivalent salary decades ago because inventions like the Internet boost the quality of life.

“It’s not quite as negative a picture as a pure GDP look would give you,” Gates said on CNN’s “Fareed Zakaria GPS” on Sunday. “It doesn’t mean we shouldn’t worry about middle class incomes, but the comparisons overstate the lack of progress.”

Addressing costs that have climbed, such as the price of a college education, Gates, who left Harvard University without graduating to create Microsoft with Paul Allen, said most people should consider a state university with lower tuition.

Gates scoffed at comparisons linking taxes and regulation to slower growth. “The idea that there’s some direct connection, that all these innovators are on strike because tax rates are at 35 percent on corporations, that’s just such nonsense.”

The current nominal level of U.S. corporate taxes is offset by elements such as overseas deferments and accelerated depreciation, Gates said.

“What’s actually being paid is way less. And the notion that change in that nominal rate will unlock something, you know, overstates how you improve things.”

Gates, 59, stepped down as Microsoft’s chief executive officer in 2000 and established, with his wife, the Bill & Melinda Gates Foundation, which fights hunger, disease and poverty in the developing world. The foundation had a total endowment of $43 billion at the end of 2014.

In 2010, Gates joined billionaires including Warren Buffett, chairman of Berkshire Hathaway Inc. and No. 2 on the Bloomberg Billionaires Index, and Oracle Corp. CEO Larry Ellison, in signing the “Giving Pledge,” a vow to give away the majority of his fortune to charity.