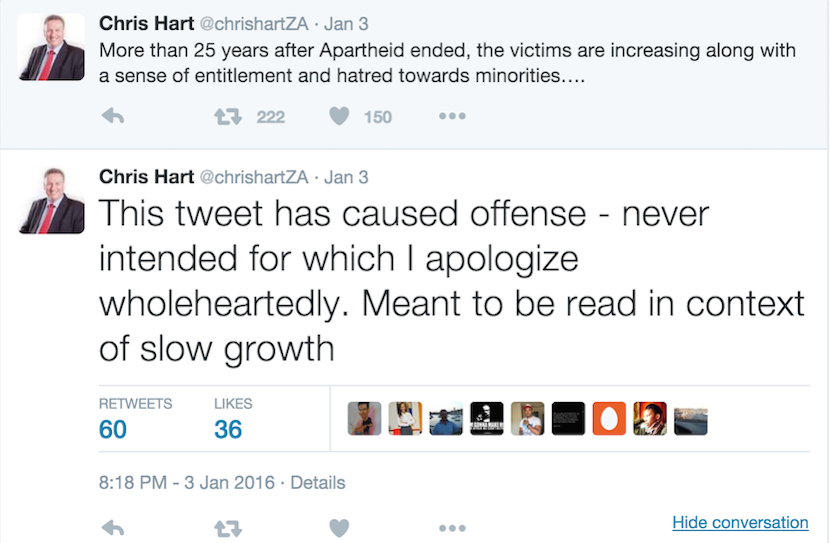 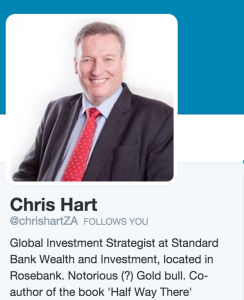 Cape Town – While Standard Bank economist Chris Hart’s tweet about entitlement and “hatred towards minorities” was problematic, it was taken out of context as Hart is not “a racist at heart”, according to entrepreneur Vuyisa Qabaka.

Writing on MyNews24, Qabaka said the renowned economist and analyst did not deserve to be fired from Standard Bank.

While he lambasted the economist for his “ignorant views”, Qabaka said he is willing to defend Hart if Standard Bank institutes any disciplinary procedures against him.

Hart was suspended on Monday after he tweeted on January 3: “More than 25 years after apartheid ended, the victims are increasing along with a sense of entitlement and hatred towards minorities.”

He later apologised, saying the tweet was taken out of context. “(It was) meant to be read in context of slow growth,” he tweeted.

“For transformation and exclusion to be resolved, SA needs a massive expansion. The economy is currently way too small,” he added.

Several court cases have been opened against Hart and others, including estate agent who were called out for alleged racist comments on social media platforms.

The South African Human Rights Commission has even launched an investigation into the matter.

Qabaka, a director at Caban Investments and an associate at Abaphumeleli Business Consultants, said he has challenged Hart many times on Twitter and was engaging with him on the day the infamous tweet was published. “I prefer to engage, whilst others simply cut to the chase,” he tweeted.

“Chris and I have engaged on social media many times over the years and I have never gotten the impression that he is … (a racist and) Sunday’s exchange was no different,” he said on MyNews24.

Explaining that he was not an apologist, he said Hart deserved to be punished, but not fired.

“I believe that the man is deserving of a suspension or a punitive fine as punishment for his ignorant view,” he said. “He doesn’t deserve further sanction beyond this because the country needs multiple economics voices to be (heard) and Chris is one of them.”

“His views – or observations as he put it – are worrying, in the backdrop of the role he holds in South African society,” he wrote.

Qabaka said South Africans have reached an uncomfortable place where 140 characters on social media can easily be misunderstood, “because a single tweet lacks context, in a conversation”.

Perhaps that will all be rectified if reports that Twitter is considering increasing the limit to 10 000 characters are true.

“Sadly, I believe that Chris Hart is the victim of a single minded narrative that equates transformation to mediocrity and inclusion to a degrading of ‘excellence’,” he said. “This narrative is both prevalent and repeated on South Africa media, where it goes relatively unchallenged.”

“As someone who engaged Chris vigorously for hours, I was happy to accept his apology,” he said. “In fact, my final remark to him was noting how his tone of narrative has ‘shifted’ after a few hours of intensive debate.”

BizNews editor Alec Hogg also came out in support of Hart on Wednesday, saying: “On the strength of 140 characters and the reaction by his employer Standard Bank, economist Chris Hart is being widely condemned as a racist (which he isn’t) and a fraud who lied about his qualifications (which is outrageous).”

Supporting Hart has not gone down well for TechCentral editor Duncan McLeod, whose support was lambasted by former government spokesperson Jimmy Manyi, who was among other prominent figures who laid charges of crimen injuria against him on Tuesday.

McLoed tweeted: “Just read Chris Hart’s ‘racist’ tweets. They’re nothing of the sort. Standard Bank (was) wrong to suspend him. This is an unjust public lynching.”

Manyi hit back on twitter, saying: “What is more sad is to hear people in the public domain like you advocating for hate speech. You should be reported to the HRC.”

“It’s pathetic,” McLeod replied to this move. “He’s (Manyi) just grandstanding. Nothing racist in anything I’ve tweeted and there never will be.

“Apparently I’m a racist who must now face crimen injuria charges (which of course won’t stick),” tweeted McLeod. “What a joke.”