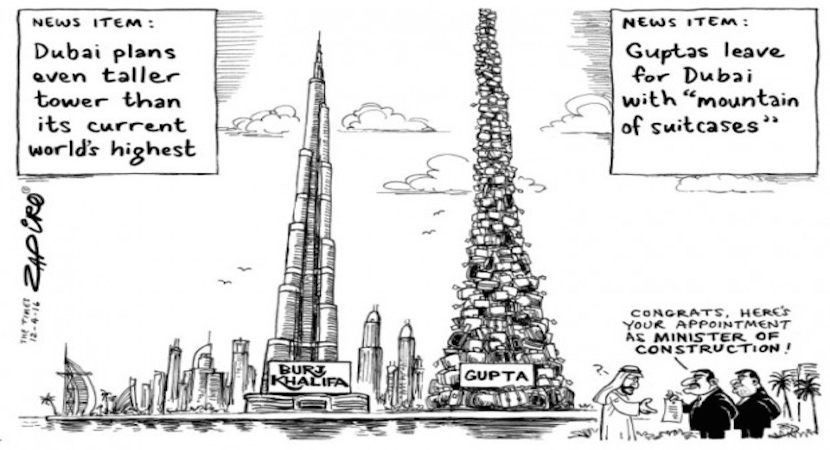 After their midnight flit to Dubai with a “mountain of luggage” two weeks ago, the Gupta family have kept a low public profile, but are clearly lobbying furiously behind the scenes. Their clout within the Zuma Administration was reflected in the disclosure that three cabinet ministers met with SA’s Big Four banks to discuss why they closed the family’s bank accounts. The ANC Youth League President popped along to the Gupta mothership to meet with the executives left behind to run their businesses. And now the head of the ANC-aligned trade union federation’s president says he also met with the Guptas, ostensibly to see what would happen to Cosatu members who work for the family’s teetering businesses. Such interference by senior government officials is unprecedented. And amateurish. For any rational being, it serves only to confirm the serious abuses the Guptas are accused of, including allegations of their appointments and conditions-attached offers of key posts in Zuma’s cabinet. The message that Cosatu’s President returned with is the Guptas have not left SA; they are simply out of the country attending a family wedding. If that’s true, then they and their political allies have seriously miscalculated the level of anger in the streets of South Africa. – Alec Hogg

Pietermaritzburg – Cosatu president Sdumo Dlamini has confirmed that union leadership met the Gupta family last week, saying the family had assured them they were not leaving South Africa but had merely attended a family wedding.

Dlamini was speaking at Cosatu’s Chris Hani memorial lecture in Pietermaritzburg on Thursday night where union members mainly from the midlands region were in attendance.

“Our mission behind meeting the Guptas last week was about the jobs that were at stake if they [the Guptas] decided to leave the country,” said Dlamini.

The Cosatu president reiterated the labour union’s stance against untoward influence of the state by private capital.

“If we find that they are doing the same, we will crush them,” said Dlamini.

He accused banks that had cut ties with the Gupta family of double standards, citing an instance of construction companies which had been found guilty of colluding in 2010 projects.

“When these companies were penalised at the insistence of the competition commission the banks continued doing business them and found nothing wrong with that. What we see them [the banks] doing to the Guptas is selective punishment,” he said.

Dlamini warned Cosatu members to be vigilant against enemies, including opposition parties and civil society organisations, which he accused of pursuing a regime change agenda.

“Leaders of civil society formations are individuals who pick certain campaigns but have no wish of taking responsibility, so be careful of them. They can never be trusted because they drive the agendas of their funders all the time,” said Dlamini.

He urged the rank-and-file membership to be united and to discuss opposing views within party structures.

“As long as problems cause divisions within the alliance – whether they are over candidate lists for local government elections [or] outcomes of conferences – they need to be addressed because if they are not our enemies will win.”

Dlamini emphasised the importance of unified leadership, citing this as a critical component in the build-up to the local government elections on August 3.

“Let us avoid sending mixed signals to our people. Our stance as Cosatu is clear and that is our support of the ANC in the elections. Let us not send mixed signals that will confuse our people,” he said.

He said the union federation had accepted President Jacob Zuma’s apology over the Nkandla debacle and it was ready to move on. – News24